The one lesson which most people are likely to take from The Wire is that, ultimately, individuals do not matter. Interestingly, then, it is one of the few crime shows which creates a sense that its criminal characters actually matter as people and their lives are as valuable as anybody else’s. The Wire is undoubtedly assisted in this respect by its episodic structure, which allows this gradual delineation of character to occur. Crime shows which effectively reset the plot each week can’t really do otherwise than summon up a generic criminal at the beginning of each episode and dispatch them just as precipitously at its end. 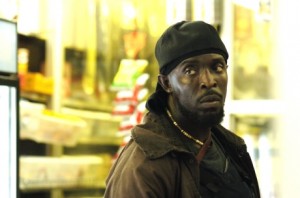 Regardless, The Wire reminds us at every turn that no matter how unique you might be—even if you’re gay and whistle whilst you steal people’s drugs and cash—your uniqueness won’t help you in the face of the systematic forces which rule your life (the tides and flows of “the game”). In this way, The Wire adheres to a quite conventional liberal philosophy, founded on the belief that people cannot really assist themselves, and must be raised up by reengineering the system. Consider Bubbles, one of the show’s few characters who is genuinely saved by its end. Despite his tremendous desire to go clean, he is unable to resist the lure of heroin, and only the continual intervention of an addiction support group allows him to reform by the show’s final episode. The proper attitude to adopt when watching The Wire is not moral disgust but jaded sympathy.

However, individuals benefit from their subjugation to the system, because they can no longer really be blamed for anything they do. Moreover, anybody who strives against the game and is defeated only gains in dignity. Except perhaps for Omar Little, no character demonstrates this better than Stringer Bell, the drug kingpin who attempts to become a legitimate entrepreneur in the property market. Of course, it could be argued that the two identities are intimately linked. Surely a great deal of the attraction of shows such as The Wire or Breaking Bad (2008 – ), or a film such as Scarface (1983), rests on the fact that the drug dealer embodies a particular fantasy of unfettered capitalism, as somebody who will be truly rewarded for their hard work, business savvy, and ruthless competitive instinct. Hence a developing trend in hip-hop to acknowledge the level-headed Sosa rather than Tony Montana as an inspiration. That is a topic for another article, however. 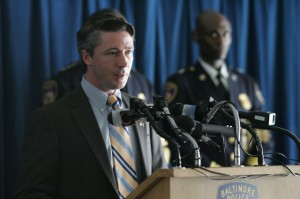 One of The Wire’s most poignant scenes takes place between Stringer Bell and his childhood friend and partner Avon Barksdale; they reminisce about their past lives in the ghetto, each unaware that the other has betrayed them to their various enemies. Stringer reflects that if he had been rich “back in the day”, he could have owned half of Baltimore’s waterfront property, and the audience realises that Stringer isn’t a true criminal—he was simply born in the wrong environment, and institutional forces prevented him from becoming that which he should have been. Stringer is a tragic figure in the classical sense: he sets himself against the overriding, impersonal power of fate, and is punished for his temerity. Creator David Simon has acknowledged this influence, stating that the relationship between individuals and institutions in The Wire mirrors that between individuals and the gods in Greek tragedy.

However, there is a point at which The Wire’s rhetoric of institutions and responsibility breaks down, and that point is Marlo Stanfield. Marlo emerges in the show’s third season as a youthful rival to Stringer and Avon for control of the Baltimore drug trade and, from the moment of his introduction, the audience senses that he is something new altogether—that, notwithstanding the carnage which Simon depicts as the norm in “Murderland”, Marlo’s brutality is unprecedented. As another character, Bodie, observes, “This nigger killing motherfuckers just to!” Moreover, he simply gives the impression of being an aberration—he’s reserved to the point of awkwardness, and sucks on lollipops amidst the cigar smoke of high-stakes poker games.

By the time anybody realises that their assumptions about Marlo are wrong—that he isn’t just another ambitious kid who can be bought off or simply disposed of—it’s too late. This is why Marlo arguably presents a problem for The Wire’s moral scheme. Unlike Stringer, who can be easily imagined as a successful black businessman (if only he’d been born into the “right” circumstances), Marlo cannot be accommodated in any conceivable social system. He’s simply and fundamentally bad—the figurative Devil of the show’s opening theme, who must be kept “down in the hole”. Marlo demonstrates that no amount of effective social policy will eliminate criminal evil; he came from nowhere, and as his last scene in the show reveals, he might be with us forever, being too tough to kill and too bad to reform. 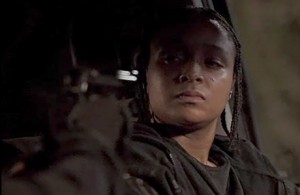 This is not intended as a criticism of The Wire, however. After all, as stated earlier, one of the show’s most remarkable achievements is to demonstrate that there is no single criminal type—that the word “criminal” is only useful in the most limited sense, to describe somebody who has broken the law, whilst revealing nothing about their character. And, just like Stringer, Marlo represents a specific human type: the mass murderer to whom no recognisable feelings can be attributed.

It’s this which prevents The Wire from feeling like an op-ed piece in a left-wing newspaper, decrying how the all-encompassing system has failed the poor and disenfranchised—an attitude which ultimately denies individuals altogether. Like every other character in The Wire, Marlo must be considered before he can be condemned, because, ultimately, the show reminds us that individuals are significant, even if their power is totally curtailed by forces beyond their control. This is why The Wire is, above all else, a fascinating, worthwhile narrative: because David Simon remembers that people are interested in people, not socioeconomics.