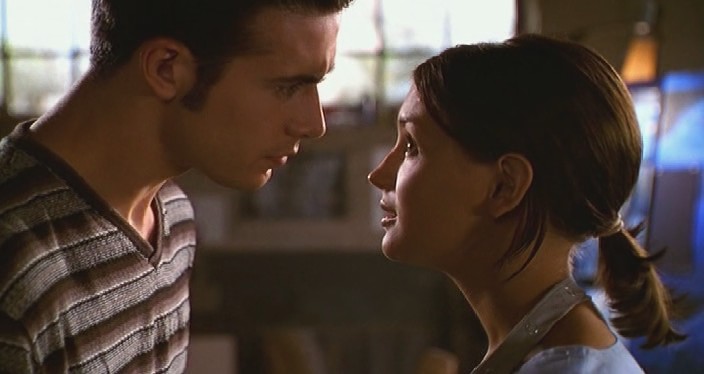 BASED ON: Pride and Prejudice by Jane Austen

Despite being a hundred and eighty-eight years apart, these two works still have many similarities in plot and characters. In this urban Austen film reincarnation, Bridget finds herself torn between two male suitors, much like Elizabeth in Pride and Prejudice. In fact, Colin Firth’s character in Bridget Jones’ Diary, Mark Darcy, is based on his depiction of Mr. Darcy in the 1995 film Pride and Prejudice. The heroines of both stories, Bridget and Elizabeth, are also alike in many ways. They are both women who are, in the eyes of society, their parents and their peers, failures at being “accomplished” or “successful” women – a fact that is particularly concerning to Bridget, who then makes an extensive list of things she needs to change about herself. This film may in fact be considered a step backward for women, in that while Elizabeth ends up realizing that the ideal, successful woman just doesn’t exist, Bridget never comes to this conclusion.

BASED ON: A Midsummer Night’s Dream by William Shakespeare

Unfortunately, this teen comedy’s connection to A Midsummer Night’s Dream is tenuous at best. Get Over It is a movie about a high school senior who gets dumped by his ex-girlfriend, and then attempts to win her back by joining the school musical in which she and her new boyfriend are performing. The play just so happens to be called “A Midsummer Night’s Rockin’ Eve” – and really, that is about as Shakespearean as this film gets. However, this is all made up for with the inclusion of the (then-relevant) singer Sisqó in the film’s cast. Who needs sonnets when you’ve got the Thong Song?

BASED ON: Pygmalion by George Bernard Shaw

A modern adaptation of George Bernard Shaw’s 1912 play Pygmalion, this rom-com was one of the most popular teen films of the 90s. The basic premise of She’s All That is the following: a popular high school guy, played by Freddie Prinze, Jr., bets his friend that he can turn his school’s resident nerd girl into the Prom Queen within six weeks. While Pygmalion focuses more on parodying the British class system, it essentially follows the same storyline, as the main male character makes a bet that he can “train” a Cockney flower girl to pass for a duchess. (Some film fans may notice that this plot also bears a striking resemblance to that of Pretty Woman.) This film also follows the late-90s/early-2000s film tradition of casting R&B stars: in this case, they are Usher and Lil’ Kim (in her acting debut)!

BASED ON: Twelfth Night, or What You Will by William Shakespeare

This film is very similar in storyline to Shakespeare’s Twelfth Night, despite being placed into a different historical context and inexplicably making soccer a major plot point. Both Twelfth Night and She’s The Man center around a convoluted romantic scenario that begins with a case of mistaken identity when the protagonist of both stories, Viola, disguises herself as a man. Overall, the characters in this film parallel characters from the play in both name and role, and the high school they attend, Illyria High, is a direct Shakespearean reference. However, one of the characters in Shakespeare’s play has a significantly different role in this modernized film adaptation – the character Malvolio. While in Twelfth Night he is a living, breathing, flesh-and-blood human being, his role in She’s The Man is that of the pet tarantula of another character.

BASED ON: Cyrano de Bergerac by Edmond Rostand

This film falls in the category of those typical, run-of-the mill cheesy teen flicks that were extremely prevalent around the turn of the century. It lacks any real cinematic value or noteworthy attributes (aside from the fact that it stars a young and ebullient Aaron Paul as a secondary character), and yet, despite being such an empty film, it draws its inspiration from the brilliant, famous and masterful play Cyrano de Bergerac. Or rather, it draws upon a few aspects of it: like Cyrano, who writes poems for another man to give to his love interest Roxane, the main character of Whatever It Takes composes heartfelt e-mails to a girl, which James Franco takes credit for.

BASED ON: Das doppelte Lottchen by Erich Kastner

A classic Disney film, The Parent Trap is in fact an adaption of a 1949 German novel called Lottie and Lisa (or, Das doppelte Lottchen). Kastner’s novel was in fact adapted into countless other films throughout the world prior to this one, but The Parent Trap is undoubtedly the most famous of all its incarnations. The film, in essence, follows the same storyline as Lottie and Lisa – two girls meet each other at a summer camp and learn that they are twins, torn apart from each other after their parents got divorced. The girls – that is, Lottie and Lisa, or… Lindsay Lohan and Lindsay Lohan – then plot to manipulate their parents into remarrying. Whereas other films on this list re-interpret or alter some factor of the books they were based on, The Parent Trap remains quite true to the book in terms of setting, style and themes.

BASED ON: The Taming of the Shrew by William Shakespeare

10 Things I Hate About You takes the controversial plot of Shakespeare’s The Taming of the Shrew and transposes it into the context of – you guessed it – a 90s high school. While the film clearly draws upon the basic plotline and themes of the play, there are significant differences in the role of female characters, which reflects the impact that the feminist movement was beginning to have on modern storytelling. Katerina, the abrasive heroine of the film, is still living in a patriarchal society, but unlike the women of Elizabethan times, she now has the freedom to speak out about it – and she does so repeatedly throughout the movie. The film also softens the story’s original sexist ending in that while Pat – the modernized Petruccio – does eventually “win” Katerina over, she still holds power in their relationship. However, both Katerina and her Shakespearean counterpart Katherine struggle to gain independence and respect, and are restricted by the social values of their respective centuries.

BASED ON: Emma by Jane Austen

If one reads Emma after having seen Clueless, striking and profound similarities can be found between the two works. The plot progression is essentially the same, following a similar comedy-of-manners style, and the novel features all of our much-loved Californian protagonists in their original Regency era forms – such as the eponymous Emma, the inspiration for Cher Horowitz. Emma, like Cher, is a beautiful, clever, rich girl who enjoys playing the role of the matchmaker in others’ lives – although she shows little interest in romantic entanglement herself. In meddling with her friends’ love lives, the female protagonist’s youthful ignorance leads to many misunderstandings amongst the various targets of her Cupid’s arrow. A brilliant modernization of a classic story, the parallels between Clueless and Emma are so subtle and understated that, even if one lacks an understanding of the plot of Austen’s novel, the film remains genuinely enjoyable.