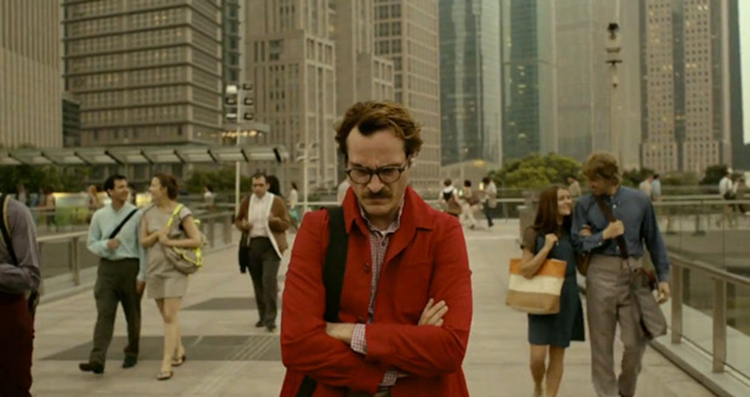 Written and Directed by Spike Jonze

A writing mentor once told me a great analogy: ‘Screenplays are like icebergs … the majority of the impact of a screenplay has little to do with the words on the page.’ That is, the impact largely comes from everything underneath.

So about thirty minutes into Her, written and directed by Spike Jonze I caught myself wondering what’s comprising this iceberg thus far? Which is to say, what’s at work here—as it pertains to character, motivation, and goal—that’s increasingly captivating about this story? Or, to be banal, what’s the ‘dramatic question’ forming in my subconscious that’ll (hopefully) ensure my investment. For example, will Luke become a Jedi and destroy the Death Star? Will Roland reach the Dark Tower? Will Indiana Jones find the ark before the Nazis?

In some stories, such goals are hard to pin down. Sometimes our hero doesn’t want anything other than to be left the fuck alone—such as in Good Will Hunting. In the case of romance stories, it’s usually the classic case of ‘will they or won’t they’ (end up together at the end)? While this emerges in Her, for a long while trying to pin down any clear goal for our hero is difficult; and anything relating to general happiness or wound-healing is too immaterial.

So, in spite of the would-be passive moviegoer in me, I’m wondering how far up the iceberg the water is lapping as we meet Theodore, a lonely, recently separated guy who talks at a computer all day, writing lovely letters to and from other people. Theodore doesn’t have much going on in his life. Could his life improve? Sure. Is he taking any steps to improve his life that we can get behind? Not really thus far. So I’m asking myself, how’s this iceberg frozen together? What’s engaging me beyond a few curious details? What’s this guy got to lose if he’s already miserable? What’s at stake?

Which brings me to closer to my point … to my ‘takeaway’ from an interesting discussion I recently heard regarding Her. You see, I follow Scriptnotes—a podcast about screenwriting and things that are interesting to screenwriters—by John August and Craig Mazin. On a recent episode they discussed Her, raising many points that relate to the craft of screenwriting, but also about audience engagement and what they may or may not perceive about the story at any given time. Least of all, they hail it as a classic screenplay…

John: I strongly endorse your endorsement. I’m very careful to never say, like, best movies of the year or anything like that because, I don’t know, it just feels gross to do that.

John: But I think it’s superlative for the reasons you describe, in that it not only is the storytelling terrific, the production design is unbelievably good. Because it’s set in a near-future Los Angeles and just the details they chose are so incredibly smart.

Craig: One of the things that I thought was so brilliant about the vision of the near future is how many things they were restrained on. People still open their mailboxes with metal keys because that’s how we’re going to open our mailboxes for a long time. They just didn’t get stupid with fake sci-fi stuff.

And just as you start to feel that it just comes up and then people are. That’s, in fact, exactly what’s happening. And then when somebody tells him, “Oh, you should bring your girlfriend.”

No one seems to care. Everyone is cool with it. It’s brilliant.

John: Yeah. What you describe is the awareness of what the audience is experimenting right at every moment. It’s such an incredibly important thing to do and it’s such an incredibly hard thing to do as a screenwriter is to recognize what is the next question that people are going to ask and how do I answer it for them in a way that is especially rewarding. How do I reward them for asking the questions?

As I said, they laud Her as a classic, further discussing such things as how outstanding the writing is in Her to sustain a character that doesn’t even appear on screen, discussing other points that I hadn’t considered, but all points that have left me a better writer for the ruminating I’ve done since.

But the takeaway from their discussion for me was their point about how (essentially) production design reinforced—on a significantly subconscious level—the audience’s suspension of disbelief.

Now, how and why is a discussion of production design relevant to screenwriting? Especially when I don’t know that a lot of these smart choices about mailboxes and such didn’t come after the screenplay was written? Because as Craig will often advocate, the writer has the opportunity to make a lot of these choices early on in the process. These choices may not remain as they are—or at all, for that matter—but why wouldn’t you take the opportunity nevertheless? You should—it’s simple world building, and it’s vitally important. For myriad reasons. And it’s especially important if you’re crafting a story that burns slowly until a ‘dramatic question’ emerges … until the ice under the surface of the water begins to do its thing.