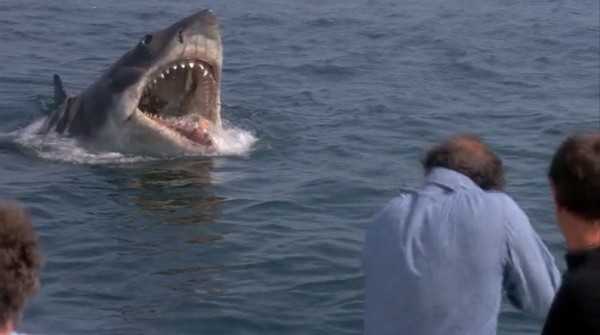 The movies are full of memorable moments of hand-to-hand combat (see pretty much every fight involving Jason Bourne) but what about hand-to-paw combat, or hand-to-fin? Do they get a look-in? Not usually. Here is a countdown of the Top 5 Human vs. Animal Fight Scenes that will make you terrified of your pet.

Considering Adam Sandler’s career over the past few years you’d guess he knew a thing or two about flogging dead horses. Turns out he actually practised on an alligator, captured here in the relatively ancient, and actually funny, Happy Gilmore.

4 | Harry Potter and the Goblet of Fire (dir. Mike Newell)

I wonder why none of the other Triwizard candidates simply summoned a broom to fly away from the dragon? Either way, it didn’t turn out so great. Harry ends up destroying half of Hogwarts before ditching his fiery pursuer down a big precipice.

Proof that if you’re emotionally invested in a story then the quality of the effects don’t matter one bit. Here our hero Westley battles a giant rat to save himself and his damsel in distress. As an audience we are willing for the rodent’s demise, even though it is clear it is just a guy in a rat suit – probably some poor soul on work experience.

Man vs. Beast doesn’t necessarily mean Man must win, as shown here by Jaws taking half of, and then all of, the over-confident Quint. The self-proclaimed Shark-hunter finds himself in at the deep end…and then in Jaws’ stomach.

Maybe the horse isn’t given enough of a chance here, but what about that hit though?! Mongo simply saunters up the animal and slogs it one round the mouth, knocking it clean to the ground. It’s cruel – but certainly impressive. Bravo. A hilarious moment from a timeless comedy.