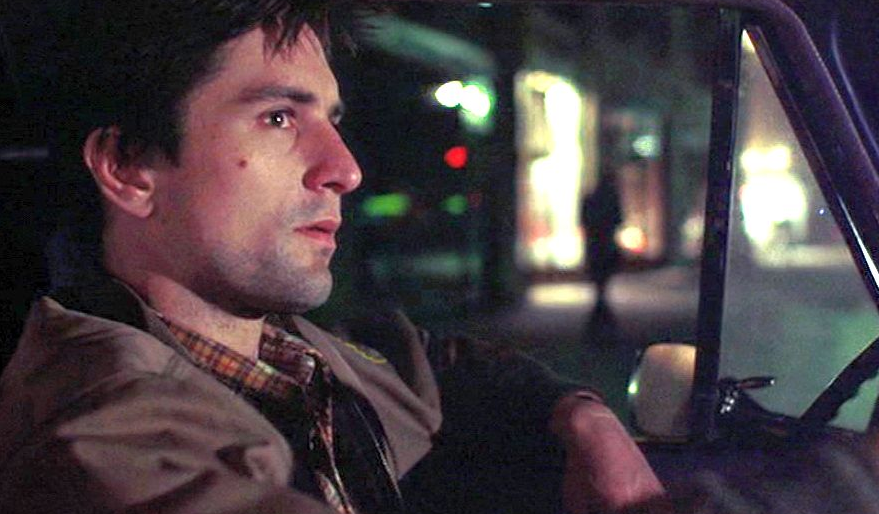 There are famous movie cars, and then there are the famous characters that drive them. Here, we take a look at five intriguing characters whose trajectory revolves around the vehicles that they inhabit.

In Martin Scorsese’s seminal tale of Travis Bickle (Robert De Niro), a New York City taxi driver whose seething disdain for his environment consumes him, a yellow taxi becomes a motif for a form of vigilantism. Travis is able to monitor the world around him from the perspective of the driver’s seat, and we, as viewers and passengers, begin to see the world as Travis does. A taxi enables a person to get from A to B, and Travis feels it’s his duty to help Iris (Jodie Foster) do just that, helping her escape the clutches of prostitution. The film’s bloody climax has become as iconic as the yellow cab itself, and a staple of American cinema.

Another film that exploits the anonymity of a taxi roaming around a city as an opportunity for drama. In Taxi Driver, Travis’ voiceover verbally expressed his inner monologue, often revealing his sinister plans for his society. In Michael Mann’s Collateral, similar thoughts manifest in the character of Vincent (Tom Cruise). A contract killer, Vincent pays cab driver Max (Jamie Foxx) to drive him around the streets of Los Angeles at night – the city captured so vividly, it becomes a character of its own. Max’s cab experience oscillates between paradise and hell; he takes refuge by gazing at his photo of an island whilst complying with Vincent’s deadly directions. Back seat driving at its worst!

This film marked the first collaboration between Ryan Gosling and Nicolas Winding Refn, whose second project together would be the ill-fated Only God Forgives (2013). With Drive, Winding Refn showed audiences that when it comes to dialogue, less can often be more. Driver (Gosling) is a Hollywood stunt driver who moonlights as a getaway driver, and has the ability to wield a car as a weapon when needed. Driver becomes involved with his lonely neighbour Irene (Carey Mulligan), displaying a different set of skills that involve more sentimentality, and compassion for Irene and her young son. However, Driver is at his best when the pressure is on and the stakes are high.

The bulk of the Locke sees Ivan Locke (Tom Hardy) behind the wheel of a car for a two-hour drive from Birmingham to London. There are multiple pressures placed on Locke, as he is forced to leave an important contracting job to be present for the birth of his child – the result of a one-night stand. He is then faced with the decision to tell his wife about said one-night stand, all while cruising along the M6. Hardy gives an incredible performance as Ivan, carrying the film with his subtle expressiveness that speaks volumes, yet remains understated. Not unlike the BMW featured in the film.

Jake Gyllenhaal’s creepily brilliant characterization of Lou in Dan Gilroy’s directorial debut has etched its way into our cinematic consciousness. Lou’s protruding eyes scour the streets of Los Angeles, looking for any opportunity to capture raw footage that he can sell to local news stations. When business picks up, Lou invests in a fiery red Dodge Challenger, which is the perfect representation of Lou himself – fast, adaptable, and ultimately, intimidating. The film’s climax also produces some of the most impressive car chase scenes in recent memory.