Catriona McKenzie graduated from the Australian Film, Television and Radio School, and has since worked on such television productions as Redfern Now, RAN: Remote Area Nurse, and The Circuit. Her newest film is Satellite Boy:

SATELLITE BOY follows Pete, a 12- year old Aboriginal boy who lives with his elderly grandfather Old Jagamarra (Gulpilil). Home is the abandoned outdoor cinema in the outback town of Wyndham. When it is threatened with demolition, Pete sees his world in jeopardy and sets off for the city. He is joined by his friend Kalmain, who has his own reasons for leaving town. Together the boys travel through epic and stunning Kimberley country and when they get lost in the bush, Pete has to remember some of the old Aboriginal bush skills his grandfather taught him for them to survive.

We were very happy to be able to chat to Catriona McKenzie about Satellite Boy, which is released in Australian cinemas the 20th of June. Here’s what she had to say:

First of all, congratulations on Satellite Boy. You’ve worked a lot in TV before making the film – is there a big transition from one to the other?

Yes, I was director on The Circuit, and director on Redfern Now as well as directing other stuff, and I’ve done a lot of it.  But before that when I was at film school, I did about five or six short films, and they were for the big screen, so in a funny way I suppose Satellite Boy was like coming full circle. It was like coming home. It’s similar, but it is different. Satellite Boy is an allegorical tale and I suppose that would not translate to television at all. It’s a big screen film, and it’s a film that requires the audience to feel it, to go on that adventure and that experience of the film. It’s definitely the terrain of cinema, and TV doesn’t do that as well.

In a way, Satellite Boy is a heart project, but it was also to me a little bit of an antidote, because I have done a lot of television. It was really great for me to be able to exercise those other skills and bring them to bear. 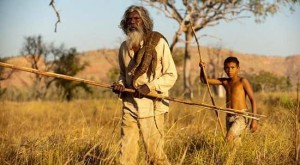 One of the interesting aspects of the film to me was the tension between the ‘old ways’ of David Gulpilil’s character, and the more ‘modern’ lifestyle that the grandson Pete initially craves. What were your thoughts on this while writing the script?

Well, there are two things: I’m adopted so I was raised by a father who was like a grandfather, and when I met my biological mother I suppose I turned away from him for a while. So I suppose part of Satellite Boy is like a love letter to my father saying, ‘I get it Dad, I get that love is not the flashy dream and the talk, but love is the day to day guide, looking after someone, raising a child with wisdom and grace and compassion and patience.’ And that’s what Gulpilil does to Pete in the film. He gives him space to find his own way, and he trusts that if you love someone you let them go, and if they come back…that whole thing. That’s one side of it.

One of the touchstones for me while writing this is from a sculpture by an artist called Brâncuși called ‘Bird in Flight’ and it is a polished bit of metal. You have to see it with a lot of space because it is the essence of a bird taking flight. It is hard to take the essence of a sculpture and turn it into a film, but I think the thing about Satellite Boy is it gives the audience space to feel what it is to be in country. I think Australians – black, white or brindle – we love the bush. We love to get out there and go fishing and camping.  We’re lucky. It’s touching on that, on the importance of country – not as something to be dug up and sent off, but as a dynamic, two-way relationship. That’s the other side of what Satellite Boy is about.

For example, in the film Picnic at Hanging Rock, the girls disappear between the rocks and are never seen again. I think that film comes from a period where the bush was perceived as a dangerous place. In Satellite Boy, those boys go through Echidna Chasm in the Bungle Bungle, and Gulpilil’s voice says, “Your ancestors have been here since the first sunrise…” They disappear and they come out the other side. It’s about country as a nurturing thing, a different way of conceiving of it.

It’s cool that you mentioned Picnic at Hanging Rock, because when I was watching that scene you mentioned, that was the first film that came to my mind. As you say though, here country is nurturing, whereas in that film it’s more dark and mysterious…

Yes, and the other film, of course, is Walkabout. That is one of my favourite films, with a young David Gulpilil. It was his first film, and he’s a young, fourteen-year old boy in that. It’s sort of a similar journey in a way. It’s about the two different worlds, and I suppose in that film, it’s more of a black and white thing, whereas in Satellite Boy it’s something that can be negotiated a bit more, in a different fashion. It was great to have David Gulpilil as the grandfather because he had been in Walkabout, and there are a couple of shots in Satellite Boy that are a direct homage to Walkabout. For example, when they walk from the dirt to the black bitumen. That was pretty cool. And it was great having David Gulpilil there as a bit of a mentor for Cameron Wallaby, the young ten year old who played Pete, and Joseph Pedley who was the older boy, Kalmain.

I’m very curious as to what it was like working with David Gulpilil?

For me, it was like as if someone had said ‘Okay, you’re going to direct Robert De Niro or Meryl Streep!’ It was fantastic. I went up to Darwin, and sat down with him. I gave him the script, but I just talked him through what the story of the film was and why I wanted to make it, and he said he’d be in it. It was a very casual kind of thing, but I came back from Darwin thinking, ‘Oh my god, he’s actually going to be in the film!’ He had a problem with his foot during filming, and couldn’t walk very well. I was worried about him, but I’d call action and he was so courageous. He’d kind of gather his strength and just do it. When I went back to the tents we were in and watched the rushes on the first day, he was amazing. He throws his spirit into it; it was pretty special.

David’s son does music on the film, and his son said it was the best acting he’d seen him do in a film, and called it Storm Boy for the twenty-first century. 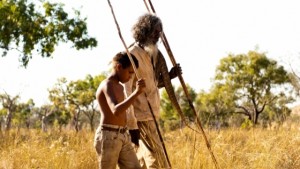 The connection he had on screen with the two boys, especially Cameron Wallaby who plays his grandson, was great. Was it the boys’ first film?

Absolutely. I found Cameron in Fitzroy Crossing (WA) playing with a Boab nut under a tree, and kinda conned him to come to audition and do some improv. He came in with his cousin, and he’d never done any acting before. We found Joseph Pedley in Wyndham (WA). There was a really beautiful moment – we premiered in Toronto, where it was nominated for a number of awards, and then we went to Berlin, and at the premier there were people clapping and stamping their feet and whistling. It went on and on, and I remember looking down at Cameron, and he was just beaming.  Kind of a little bit terrified, because it just went on and on, but also so happy. He’d never left the country, and now we’re in Berlin. It’s snowing and he’s never seen snow before. I was very proud of him, because he put his faith in me and the team, and just came along for the adventure. He wants to do it again. He keeps asking me to write something else because he wants to do it again.

Just going back to what you mentioned before about the story being an allegory – one of the themes and motifs that kept recurring was the stars, space, the sky etc. Was that something you always had in mind, or did it develop over time as you worked on the script?

The way that I usually write is that I write from sound. I find sound really generative in terms of ideas. So when you look at the stars, every star has a light pattern, and that light pattern translates into a sound, a note, a tone. So if you look at the Milky Way, it’s a symphony of sound. Of course, the Milky Way in Aboriginal culture is heaven; that’s where we go when we die. It also reflects the Earth – the Earth and Milky Way are reflections of each other. We as characters are kind of in this space in between. That was always in the script, and then I set it in an abandoned outdoor cinema. George Miller talks about how the cinema is the church for the twentieth century, and people flock to cinemas to sit in the dark and understand who they are in the world, just like religion used to help us. In Satellite Boy there is the cinema screen, and above that is the Milky Way, and it’s sort of looking at those symbols of the different cultures – it’s sort of saying this is Aboriginal country, and the cultural impact of that is transcended in cinema. Cinema is part of that bigger picture, not the other way around.

The scene where the boys sit in the satellite dish, they are sort of cupped in this nurturing embrace, and kept safe in the space in between. The grandfather is calling out to them, almost like they’re in a different time and space, or a different place, trying to sing them back to where he is. It’s quite an allegorical, symbolic space to film, and it was always meant to be like that. I guess that was the trick, because it’s an unusual film in that way.