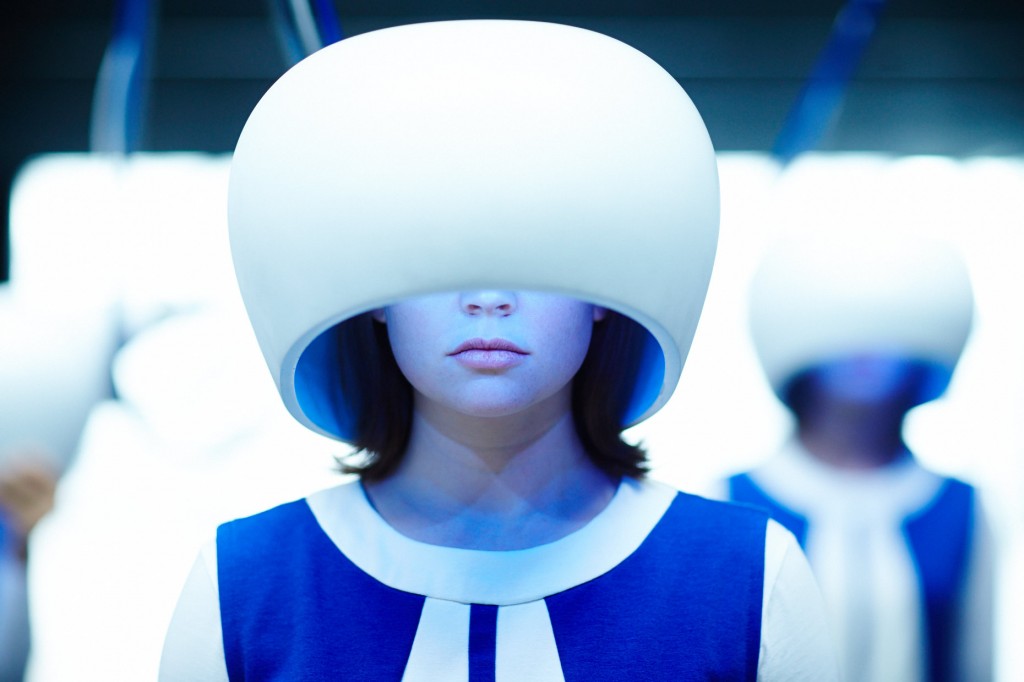 Having a glass of red wine on the top of the Sofitel Hotel with the Spierig Brothers as the sun goes down on a Friday evening isn’t the worst way ReelGood has managed to spend its time. The brothers’ new film, Predestination, recently opened the Melbourne International Film Festival. We talked to them about the science fiction mind-bender as well as their experiences as genre filmmakers in Australia.

Directing partnerships are not unheard of but they’re also not super common. What do you think the benefits/drawbacks of working as a team?

P: Well, the benefits are that you have another voice that you can turn to. Michael and I don’t really have much of a filter with one another. Being brothers, we’re pretty honest and if we don’t like something, we’ll say it straight up.

P: But also, you have a certain amount of confidence. If you like something and then Michael might agree and say yep, we’ve got the take or this is the right design, or whatever it may be. The drawbacks – he takes half of my money. There aren’t a lot of drawbacks. If you don’t agree with each other, then you fight it out. But usually, if Michael is more passionate about something and he can justify it then I’ll just let it go. But if there were a tremendous amount of drawbacks then we wouldn’t be directing movies. I mean, we do it because we feel like it makes a ton of sense and we work well together.

Predestination was filmed in Australia but set in America with American accents. Do you think there is a place for these sort of genre films in Australia?

P: There is, but it’s tricky, because I think what you have to do, if you want to do this type of film in Australia, you probably have to lower your budget a bit more. Because your audience is so much smaller as opposed to targeting the U.S., which is 300 or so million. We had an experience on Undead, when we sold to the U.S.  and one of the distributors told us ‘look, I really like your movie, but we need to dub it into English.’ And that’s a hell of a thing.

P: And the truth is, you want to sell it globally. It’s much easier to sell a film with American accents than Australian. There are films that come out, like Red Dog or Mau’s Last Dancer, that break through and do really well. It just depends. And certainly Red Dog was a film that was uniquely Australian, and it worked.

P: Yeah, it didn’t do very well in the U.S. but it certainly did well here.

A defining characteristic of your work to date is your ability to push your means to its limit. Do you think that a larger budget might inhibit creativity to a certain degree?

M: I think what tends to happen is the larger the budget the more hands touch it and you have a certain obligation. For example, if you’re making a film with a budget of 200 million dollars, you have to appeal to the largest possible audience. So often that can stifle creativity a little bit. Not always, but often it can. The real creative stuff often happens in lower budget, because you have no rules.

The great thing about Predestination as far as the budget went is that we had nobody really telling us what to do, which can be a good and a bad thing. But in the case of this film it gave us the total freedom to actually create a character like Sarah (Snook)’s character in this type of movie, Which is very, very rare. You don’t see and intersex person in genre, which I was proud of. And it’s so amazing that Heinlein wrote that story in the late 50s, and it’s still such a uniquely original story, and I love the fact that we got to make it exactly as we wanted to. 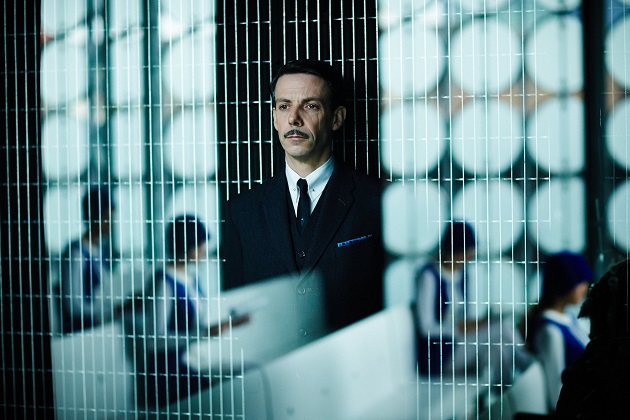 In a way, Predestination continues a film discussion that begun with German Expressionism and has been continued through films such as Blade Runner, Dark City and even Ethan Hawke’s own Gattaca. What attracted you to this genre?

P: Well,  I mean, those types of films, their unique ideas – science fiction is the genre of big ideas.

M: And it allows  you to reflect contemporary issues in a fantasy world. So many of those early authors, like Heinlein and Asimov, Arthur C. Clarke….Philip K. Dick – he was always about that dystopia, paranoia, things always reflecting what was going on with the Cold War, all of those sorts of things. I loved that.

How did you go about turning Melbourne into noirish America?

M: That’s the reason why we wanted to come here. Firstly there are some amazing actors in this town, but the locations – we were so excited. Like the RMIT building. As soon as we saw that building we said ‘Wow, look at that. Nobody is going to believe that exists.’ And we go inside and all the Space Corp, all the girls on the tread mills, all of that…we basically built nothing. We brought a few dressings in, but that building was amazing. One of the greatest assets here was the Abbotsford Convent. We used that for about twenty locations, because it’s like a backlot. We could go shoot in the park and then in the afternoon go shoot in the building. We used every corner of that place.

P: Part of these types of movies, you have these little moments, these quarter page moments – it can take a long time to shoot one set up and you go to that location and it’s half a day or a day gone whereas with Abbotsford we could shoot one room while the B-Camera is setting up in the other room and shoot it very very quickly, which is what we set out to do.

How did you go about adapting Heinlein’s novel? What was culled and what was expanded?

M: Very little was culled. Like Peter was saying, it’s a very short, short story. So, we used pretty much everything. And it just sort of laid a foundation, and a pretty solid foundation, for the time travelling paradox aspects of it. They were all laid out by Heinlein, which is amazing. The guy wrote that in a day. We obviously expanded the characters a lot. We introduced the new thriller element, with the Fizzle Bomber. The Fizzle Bomber is mentioned in one sentence in the short story and we obviously expanded that into a whole character. The short story is very isolated to the bar, and we do flashbacks but it’s very much like a two-hander in the bar, but like I said we used pretty much everything, but we chose to expand it, otherwise the film might have been a little too stagnant.

P: It was also an opportunity to expand the characters, because they were interesting and it was all sort of there but it wasn’t, in film screenplay terms, it wasn’t a complete arch. It had elements of it, but it needed to be really fleshed out.

M: Time travel films can sometimes be trick films, it can just be about ‘look how clever we are by doing this paradox’ and all that. But when they’re good, something like Back To The Future, you forget all that, you just get hooked on the characters. I hope that’s the case with this film.

What advice do you have for young filmmakers?

M: The best thing you could ever do is make films, and I know that sounds obvious, but if you want to make features, you have to make short films first. You have to build your confidence in the craft, working with actors and one of the best things you can do as you’re learning is fail, because you learn so much from your failures. More so sometimes than from your successes. But if you’re passionate to make a feature, what you have to do is find a way to make it regardless of whether you get funding or not. Our first film (Undead), nobody backed us on that. The only way that was gonna happen was if we backed ourselves. So we put together $70,000 of our own money and got a lot of people to work on a deferral system. As an independent filmmaker, to kind of bitch and complain that nobody is giving you money, you’ve got to find another way. If you’re passionate enough, you’ll find another way and just get it done.

P: The other thing I would say too is that the problem that tends to happen to a lot of filmmakers is that they give up to easily when it starts to get a little too hard and the problem with that is that directors are creative people, they’re not business people. So you have to try to find people. Align yourself with producing partners who can handle the process of raising money, because it’s a whole other aspect of filmmaking that people coming out of film school don’t fully understand. The financing part of filmmaking is so much a part of the process and it really is the process that defines your film in many respects. How much money you can get will define how your film is going to be made and who’s financing the film will help define how your film gets made. So the whole financing aspect is a thing that a lot of filmmakers don’t fully grasp and they really need to align themselves with producing partners that will help them get there.

P: Winchester is something that’s real that we’re in the process of writing. It’s a lengthy process and hopefully the film gets made. We’ve got a number of things that we’re working on. There’s a couple of projects and there will be other things announced shortly. But like most filmmakers that are working or trying to keep their careers going, you need to have multiple projects going and that’s what we have right now. But Winchester is the first things that’s been announced and it’s a very cool film. It’s about Sarah Winchester who was the heir to the Winchester Rifle fortune. It’s based on a true story and she believed that all the people who were killed by the Winchester Rifle were haunting her. So she built this house, that really exists and is a tourist attraction in the states, to kind of confuse the ghosts and basically scare them off.

P: So we’re thrilled to be able to write this story, because it’s insane.

M: And then there’s an action movie that we’re working on as well and there’s also another science fiction film, so there’s multiple things. Every filmmaker will have stories of projects that they worked on for years that didn’t happen.

P: You wanna see the best one? Go see Jodorowsky’s Dune. Have you seen Jodorowsky’s other films? Man, have a bottle of this (points to his red wine) and watch Holy Mountain.