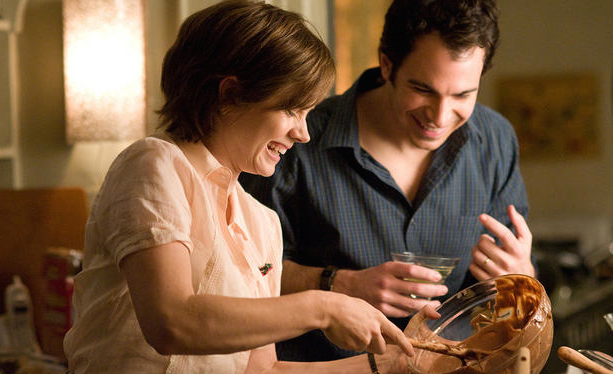 This film is simply irresistible because of its attention to food detail. Watching the actors glaze cakes with caramel and melted chocolate makes your stomach weep in hunger. An entrée of crab ravioli bisque won’t hurt, right? Even if it is orchestrated by magical crab? Simply Irresistible will make you want to abandon your diet and live inside a restaurant.  Amanda Shelton (Sarah Michelle Gellar) miraculously transforms into a marvellous cook. Montages of unattainable cuisines shape each taunting scene.

A film about mass producing meat for take-away chains is definitely a film to steer clear from if you’re craving deep fried chips and burgers. Don Anderson (Greg Kinnear) is a dieter’s hero; rejecting the enticing Jacks with determination and stamina. Juicy burgers being eaten by the dozen. Bruce Willis demolishes a mountainous burger filled with all the salivating trimmings. It just makes you want to jump into the screen, grab it and gobble it like a duck. Like Squidaward and his lust for Krabby Patties.

Zombieland isn’t as much of an odd choice as you might think. Unless you have the sudden desire to eat human flesh and organs then by all means you understand. It’s the Twinkie factor. Tallahassee (Woody Harrelson) is on a mission to find the tiny trinket of sugary goodness that is a Twinkie, all the while driving through the American countryside fighting Zombies. If you are craving a cream filled bun (or meat) knock this off your movie list.

Hungry yet? Want to quit your diet? Screw being skinny for summer or shredded for film festivals! Instead, have a nice bowl of home-made spaghetti and meatballs. Big Night is a heart-felt American-Italian film about two Italians that owns a restaurant which serves incredibly enchanting Italian cuisine. If you’re craving meatballs, avoid this film like the plague. There’s an entire scene dedicated to a conversation about spaghetti and meatballs which makes you drool at the very mention of Napoli sauce.

WARNING: Chef will make you want to stop aspiring for a bikini body. Instead you will find yourself crying in the corner of your house, rocking back and forth chanting, ‘I just want to lather my body with butter and sleep in a bread roll.’ From the get-go, food is presented as the most luxurious and desirable entity. This well-crafted food pornographic film celebrates the food truck industry. The actor’ orgasm over the tasty delights while the audience licks their lips and cuddles their crying stomach. The spittle from the citrus to the over-indulgent slab of sauce would make any dieter wail in hunger. #getinmebelly

SPOILER ALERT: There’s a whole lot of chocolate and candy that will make your tummy rumble and protest for a colossal gulp from the chocolate river.  *Sighs* The opening scene just makes you want to be a mammoth for eternity. Multitudes of chocolate coated crunchy biscuits introduce us to a world of yearning for sugar. It just makes you want to visit a traditional candy store and sing ‘The Candy Man Can’ while munching on a scrumdiddlyumptious bar. After all, chocolate is mixed with love. It is true love. The only love.