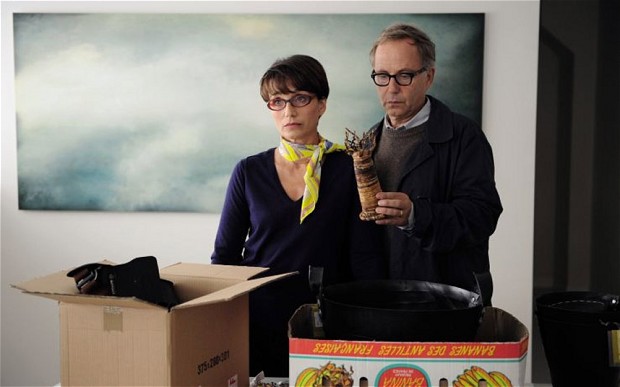 2013 was a year praised by most for its wealth of cinematic riches, certainly one of the stronger years in recent memory. In particular, as witnessed in most critics ‘best of’ lists, there was an unusually large number of American films. Easily understandable, as the year saw releases from high profile filmmakers like Martin Scorsese, the Coen Brothers, David O. Russell, Spike Jonze, and Alexander Payne. This was coupled by a strong indie presence with the likes of Upstream Color, Short Term 12, and Before Midnight (certainly among others). In what is unfortunately now the exception rather than the rule, the strong showing of American films has seen a lot of foreign-language films overshadowed. In what follows, I have assembled an entirely subjective handful of foreign language films that are amongst the years best for reasons I highlight below. Note: I have purposefully left off any foreign language film that will receive an Australian theatrical release in the coming months (read Blue is the Warmest Color, The Great Beauty, The Past, Wadjda).

Bastards is Claire Denis’ take on film noir. A grainy, textured piece of cinema, Bastards unfolds in a rotten-to-the-core Paris when Marco (Vincent Lindon) returns after a familial tragedy. It’s a world where women are sold like goods and power only favours the rich. Like all good noir, Marco is in over his head as Ms Denis slowly feeds us pieces of narrative in drips and drabs. The film is brutal. Not with any particular on screen violence, but with mood. That’s always been Ms Denis’ strength and thus fits perfectly into a noir tale. While her narratives are quite often elliptical, it’s this mood that grabs you by the throat and refuses to let go. Bastards is a physical film, replete with bare interiors, cold surfaces, and weathered characters. Ms Denis makes use of close ups, instantly evoking Jean Epstein’s The Fall of the House of Usher, which tend to dominate the film, adding to the physicality and situating corporeal disintegration at the heart of the film. No one is innocent and characters are more than what they seem. Bastards is a visceral, unrelenting film that offers little agency to its female characters, but it’s a film that peers deep into a dark world to study the consequences of family, lust and obsession. Haunting.

In the House (Francois Ozon)

Francois Ozon returns to form with this self-reflexive meta-cinematic gem. Dealing with Ozon’s usual risqué thematics, the film follows a disillusioned literature teacher (the always fabulous Fabrice Luchini) as he begins to take interest in a students writing task, slowly ensnaring both him and his art-dealing wife. What follows is a psychological comedy that playfully manipulates the viewer while exploring art’s role in our society and the mechanisms of its creation. Ozon has always struck me as a talented director, blending a mix of Almodovar’s most playful stylistics (colour palette, music, dialogue) and Hitchcock’s dark undertones (the final scene in the film evokes Rear Window). In his new film, he delicately balances comedy and tragedy in this story-within-a-story. The film lures you in as you continually ask yourself what is fiction and what is real. And with his usual voyeuristic direction, Ozon knows how to make his female characters desirable. Stalwarts Kristen Scott Thomas and Emmanuelle Seigner round out the cast.

Veteran Abbas Kiarostami’s second film outside his native Iran, is a nuanced study of human relationships in Tokyo. Like Someone in Love follows Akiko, a student who works part time as an escort. When she is talked into visiting an aging sociology professor, Takashi, a bond forms between the two that is perhaps both plutonic and sexual. As always with Kiarostami, these details are left ambiguous. The film’s narrative unfolds in seemingly real time (although he elliptically cuts car scenes) and while narrative is a series of conversations, he creates a rhythm that entirely draws the viewer in, allowing the film to live and breathe around you. Takashi is like a wise grandfather, humbly dispersing his wisdom to those around him (perhaps like an allegorical Kiarostami). The director has a distinct visual style, at once indebted to Japanese maestro, Ozu (who chose to place his camera between characters instead of the typical shot-reverse shot). Throughout the film, I was continually pondering whether this was in fact an ode of sorts to Ozu; in particularly, Ozu’s 1953 film, Tokyo Story, exploring similar themes of generational impatience. Kiarostami prefers the viewer to see and hear only what his characters see and hear so there are plenty of static shots and reflections off windows and mirrors, replacing the quick cutting of most modern movies. By creating deep focus in his frames, there are multiple points of action that actively challenge the viewer to engage with the characters. By doing so, the film feels entirely personal while showing the viewer different subjectivities. And for a self confessed cinephile, viewing the film makes you feel like someone in love.

Something in the Air (Olivier Assayas)

Something in the Air (or Après Mai) is a semi-autobiographical narrative set in 1971, three years after the social and political unrest of May ’68. Gilles (Clement Metayer), a budding artist, is part of a leftist collective caught up in trying to keep the revolution alive. The revolution lingering in the air renders to sexual potency and possibility, as Gilles juggles two love interests, his artistic muse Laure (Carol Combes), to whom he believes he achieves his artistic peak; and Christine (Lola Creton – also in Bastards), who loves Gilles without impediment. Assayas crafts a simple narrative about the idealism of youth, particularly in these heady times. However, with the benefit of hindsight, Assayas casts a relatively objective view over the by products of a revolution – violence, vandalism and destruction. It’s by removing himself that the narrative stirs up its emotional core: the uncertainty of youth and finding ones own expression. Assayas was roughly Gilles age in 1971, so in part, the film also explores his own origins of film, working on cheesy British B-movie sets. In the end though, its film that gives Gilles resolution, finding his muse in a medium that brings the past back to life. Oh, there’s also a fantastic soundtrack charting the revolutionary power of music in the 60s and 70s.

The Act of Killing (Joshua Oppenheimer, Christine Cynn and Anonymous)

Joshua Oppenheimer’s visually and emotionally arresting documentary is highly original. It is the one foreign language film that has continually made critics ‘best of 2013’ lists, and it’s easy to see why. Taking a piece of history that is probably unknown to most westerners (myself included), Oppenheimer challenged former executioners to make a film about the atrocities of the 1965-66 military coup. It was during this time that hundreds of thousands of accused Communists were murdered. These executioners have become celebrities and powerful political and military leaders in Indonesia, celebrated for purging their lands of Communism. The documentary is situated in a corrupt world where the editor of a large newspaper peddles propaganda; soldier’s brag about raping children in their raids and torture is openly celebrated. Initially as the executioners re-enact the cold, biased murders they participated in for the camera, they feel like heroes, finding humour in their acts. Eventually, when they are asked to put the shoe on the other foot and act as the victim, the realisation of their barbarity begins to take a hold on them. The Act of Killing is both a riveting essay on one of the bloodiest events in our modern history, as well as an illumination of the power and reach of cinema.

While not exactly a foreign language film (most of the dialogue is in English), Museum Hours certainly makes one feel like a tourist in a foreign country. Set in and around the Kunsthistorisches Art Museum in Vienna, the film charts a burgeoning friendship between a museum guard and a Canadian visitor, in Vienna to see a distant cousin who is in a coma. The film is split between Johan’s observations on the museum and its many tourists, and snapshots of Vienna, a wintery backdrop. What struck me about Museum Hours was its similarity in style to Jean-Luc Godard’s Film Socialisme (and perhaps even a starkly similar Marxist undercurrent). Cohen uses the Canadian tourist as a guide around Vienna, discovering a new place like one does with an artwork, while creating a collage of image, sound and movement. What results are short snippets of conversations with little context, snapshots of artwork hanging in the museum juxtaposed against a wintery Vienna, all the while using art as a tool for exploring our modern lives. At one stage in the film, Cohen lets the viewer sit in on a museum tour through some of Bruegel’s works. During the tour, the lecturer informs on part of the charm of Bruegel’s work, “It’s part allegory, part reality”. This seems to be the voice present throughout Museum Hours as Cohen takes us in and out of paintings to show us the effacement of barriers between this particular museum and the city of Vienna. As the tour guide ruminates at the beginning of the film in reference to his career change from band manager to museum guard, “I’ve had my share of loud. And now I have my share of quiet”. This is exactly the kind of film Cohen has created, a quiet mediation on art and life and how the two intersect.

A pure genre affair, Johnnie To’s Drug War is a masterclass in action filmmaking. Comprised of a series of excellent set pieces, To’s film begins with two such pieces: a drug lord, Timmy (Louis Koo) fleeing an explosion in one of his drug labs before crashing through a store window and being caught by the police; followed by the introduction of police captain Zhang (Sun Honglei) undercover, foiling a drug smuggling operation. A relatively straightforward plot sees the police captain enter a partnership of necessity with Timmy to bring down a major cartel. While the film is fairly light on action (for a To film), it is nevertheless edge of your seat, creatively written and shot, juxtaposing sequences between the old and new China. The film features some colourful characters, namely the Mute Brothers, a pair of deaf, seemingly redundant drug workers that know how to use a gun. The film culminates in a Heat-like shootout between good and bad, with a surprising ending that breaks from usual action cliché. The film enjoys playing with the fluidity of Zhang’s character, going undercover repeatedly to get the bad guys. Drug War is by-and-large the best action film of the year and a thoroughly entertaining 100 minutes.