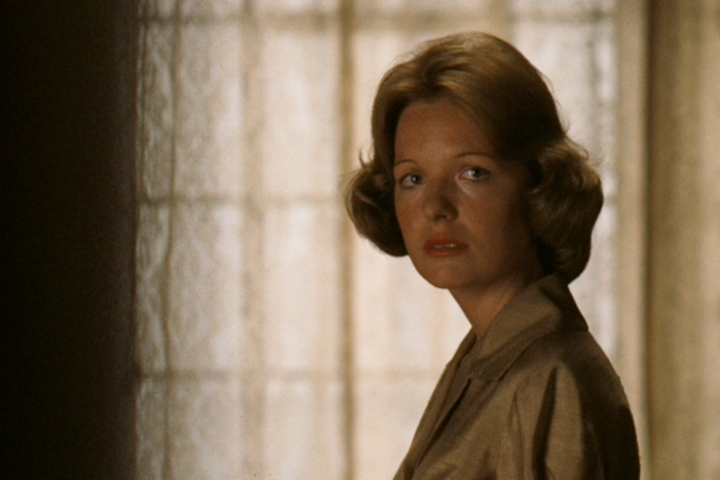 The significance of the final shot has been known to filmmakers almost since the inception of cinema. There’s a unique consequence to the final shot – it’s conclusive opinion able to enhance, dismiss or even disregard everything that has come before it. Here are ReelGood’s 15 Greatest Final Shots In Cinema History.

The Shot: After her filming of the Blair Witch legend goes horribly awry, Heather (Heather Donahue) enters the grimy basement of an abandoned house and promptly drops her camera. The camera stays on record and all we can see is her filmmaking teammate Mike (Mike Williams) standing facing the corner – in the manner we learned that serial killer Rustin Parr made the children he eventually murdered.

The Shot: Ethan Edwards (John Wayne) gives a parting gesture as he finally leaves the house he helped restore, walking out into the West. There’s beautiful simplicity in the shot, casting most of the frame in shadow, which highlights the dark side of Ethan. Ultimately however, he’s denied entry into very place he made safe and is sent out into the nothingness, suggesting that repentance and atonement do not come hand in hand.

The Shot: Having fully succumb to his darker nature, Michael Corleone (Al Pacino) assumes the mantle of head of the Corleone family. His wife, Kay (Diane Keaton), confronts him about murdering his brother-in-law. He lies and she believes him, only to be shut out by a group of advisors paying their respects.

The Shot: By the time Charlie Chaplin began production on Modern Times, the era of “talkies” was in full swing. An established visual storyteller, Chaplin decided to keep his film silent, ultimately his last of that ilk. The final shot is an epilogue for Chaplin’s brilliant silent film career. As Chaplin’s iconic song score ‘Smile’ swells and the Tramp and the Orphan stroll off down a highway together, it’s almost a foreshadowing of Chaplin’s future, the bittersweet power of hindsight reminding us that his career peaked with the release of Modern Times.

The Shot: Famously offering no real resolution – a reminder of how real-life stories remain unsettled – the final shot of Truffaut’s The 400 Blows has protagonist Daniel (Jean-Pierre Léaud) running away from his responsibilities and his woes, only to find the shoreline and the void beyond. Daniel then turns and looks straight at us, reminding us that we’re all on the same boat in one way or another.

The Shot: The seemingly superfluous final shot in Andrei Takovsky’s Stalker enhances the idea of crisis of faith the underlines the entire film. The camera turns to the young daughter of the protagonist, staring blankly at a glass. Suddenly, her surroundings begin to rumble and yet the shot holds on the impassive face of the girl, suggesting that what is happening around her is irrelevant.

The Shot: Considering he never made it to the end of the film, there’s no telling what Robert would have made of the final shot of Stanley Kubrick’s 2001: A Space Odyssey. The rebirth of Keir Dullea’s dimension-traversing astronaut into a giant alien baby is simultaneously disturbing, weird and beautiful; an ambiguous future of mankind.

The Shot: “Louie, I think this is the beginning of a beautiful friendship”.  As Rick and Louis stroll into the mist on the airport runway we realise that you don’t necessarily have to lead the charge to encourage change. As the shot rises, Rick (Humphrey Bogart) and Louis (Claude Rains) become smaller, and yet their voices remain the same. No matter how lost they become in the mist of history, their impact will always be felt.

The Shot: The final moments of Claire Denis’ Beau Travail, a film of repression and aggressive masculinity, include a single shot of Denis Lavant, broken up by a series of credits. The camera lingers on Lavant as he expresses himself in dance, liberating his character from a sort of denial of self.

The Shot: Little more can be said about the final shot of Psycho, and indeed the film itself, than has already been said. But Alfred Hitchcock superimposition of a skull of the face of the psychotic Norman Bates (Anthony Perkins) is perhaps the most significant superimposition in film history.

The Shot: There have been numerous stories about the tumultuous relationship between director Werner Herzog and his regular star Klaus Kinski, but nothing that has quite the poignancy of the final shot of Aguirre: The Wrath of God – Klaus Kinski on a boat, talking to monkeys.

The Shot: Having spent so much time living in dreams, Dom Cobb (Leonardo DiCaprio), adopts the use of a spinning top as a totem – a way of determining whether he is in the dream world or the real world. On completing one final job that will free himself from persecution, Cobb is finally reunited with his family. He spins the top and rushes outside to be reunited with his children. In the final second, the spinning top wobbles.

The Shot: The final moments of The Texas Chainsaw Massacre doesn’t exploit the audience with a shock moment of say, the villain coming back alive and well in the closing seconds. But the twisted, coverting image of Leatherface’s (Gunnar Hansen) silhouette is a far more unsettling and ambiguous thing. Sally (Marylin Burns) gets away but we don’t feel any better for it.

The Shot: The Thing, an alien life form that assumes the appearance of whatever it kills, has wrecked havoc on the Antarctic research station and most of its inhabitants. The final survivors, MacReady (Kurt Russell) and Childs (Keith David), take a moment of respite, neither sure whether the other is a friend or in fact The Thing in an assumed form. Cut to a long shot of the station. Credits.