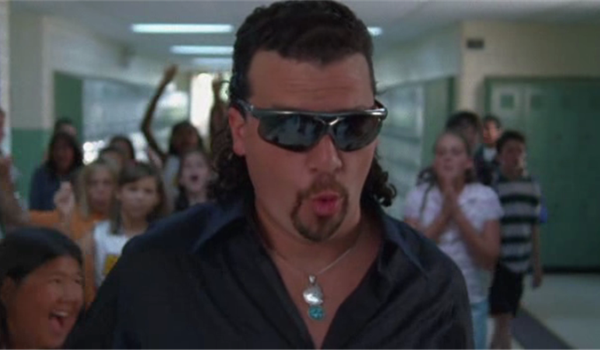 “My story is the story of a raging Christ figure who tore himself off the cross and looked at the Romans with blood in his eyes and said “my turn now, cocksuckers.”

So narrates Kenny Powers (Danny McBride) as he begins another comeback in the hilarious and serially underrated Eastbound and Down. This is about where any semblance of religion in the show ends. And it ends abruptly. Eastbound and Down is easily the most irreverent show to hit our screens in recent memory, and possibly ever. However, below the surface of perversity, there is a darkly acute social commentary of America in the 21st Century. Amid spiralling wealth, inequality and a shrinking middle class, the ‘American Dream’ becomes exactly that, a dream. For the majority of lower to middle class Americans, considerable wealth will become unappeasable. It’s within the context of these 21st Century class struggles that Eastbound and Down’s hyperbolised performance begins to make sense.

Conceived from the minds of Ben Best, Jody Hill and Danny McBride, Eastbound follows washed up, former-professional baseball pitcher Kenny Powers as he chases fame and fortune, on and off the pitch. Across four seasons, Kenny navigates his way through a range of milieu, including: a North Carolina middle school as a substitute P.E. teacher, Mexico and Myrtle Beach as a baseball player in minor leagues, before arriving onto a life in the media, on board a sports talk show. All the while indulging in as many recreational substances as possible. Joining him throughout the series is a range of superb guest stars and cameos including Will Ferrell (who also produces the series), Matthew McConaughey, John Hawkes, Michael Peña, Lily Tomlin, Don Johnson, Jason Sudeikis, Tim Heidecker, Craig Robinson and Sacha Baron Cohen. Even Lindsay Lohan makes an appearance. And who would have thought? Her presence actually works.

Television series can attempt to create a world wherein the characters embody a reflection of that society or setting, the successes of which vary from show to show. Like Mad Men portraying a middle class America in the 1960s, Eastbound and Down has created a cross section of America’s middle class in the 21st Century. Amid financial turmoil, an ever-increasing wealth gap and shrinking middle class, social and financial conditions have transformed the American landscape. The American Dream has itself transformed with the changing social landscape and that elusive piece-of-the-pie has become harder to attain for the vast majority. Each character in Eastbound, in his or her way, is chasing that dream. No longer is working a normal, decent job sufficient for Kenny, and to some extent, Stevie (Steve Little), to make a living. As it becomes harder to grasp that wealth, partly due to the short life span of a sports star, their efforts increase and border on desperation. It is in this corrupt world Eastbound situates itself. The instant gratification of a modern world creates character’s that are a grotesque hyperbole of this American wasteland.

The brilliance of Eastbound lies in the central performance of McBride. He manages to sell the performance of Kenny while maintaining some verisimilitude of American life. As the central character in the show, Kenny appears in the majority of scenes throughout the series. If he isn’t physically in the shot then his voice over usually directs the viewer to his thoughts. To be able to maintain the viewers interest in the Kenny Power’s character for four seasons of sometimes obnoxious, always- controversial thought, is truly a feat in itself. Given this much time with one character in a comedy, it can easily become irritating for the viewer (see Chris Lilley’s new series, Ja’mie). However, McBride’s performance as Kenny always allows the viewer to retain at least a little empathy towards Powers. No matter the depths of depravity Kenny sinks to, the character is redeemable precisely because of McBride’s performance. Kenny has always suffered from a lack of humility and this is in part due to the excesses of celebrity and sports stardom. Who needs humility when you’re on top of the world, right? McBride, like all his roles, brings a charisma and charm to his performance. From comedies like This is the End, Pineapple Express and The Foot Fist Way (also with Jody Hill) to drama’s like As I Lay Dying and All the Real Girls, McBride constantly showcases his acting abilities and isn’t afraid of the emotion needed throughout this series. However, he never over plays it, delivering an original, alienated and restrained performance in Eastbound’s poignant moments.

Just as Bored to Death explored gender roles in contemporary America, so too does Eastbound, albeit in the extreme. Traditional gendered notions of the ‘bread winner’ and parenting roles play a large part in the series, as too, the notions of male friendship and homoeroticism. A large portion of the jokes borders the homoerotic. No character represents notions of male friendship bordering on the homoerotic more so than Kenny’s sidekick, Stevie. We are introduced to Stevie in the first episode as the music teacher at Kenny’s North Carolina middle school. He reminds Kenny that they attended high school together and he was a “drum major” who “wore a cape in sophomore year”. A nonchalant Kenny responds, “Sorry, nothing”. And so begins Stevie’s idolatry of Kenny, bordering on sexual obsession, which continually drives him to perform disturbing and grotesque acts (including a prosthetic chin!) to win the respect and adoration of Kenny. The dynamics of their relationship is truly original and yet mirrors the blind idolisation of contemporary sports stars in America. This idolatry, as seen in Eastbound, can be damaging and misguided. While Kenny rarely shows affection or even acknowledgement toward Stevie, he constantly returns to Stevie’s companionship. Perhaps Kenny takes advantage of Stevie’s unwavering devotion towards him, but, even more likely, it is a slow, unacknowledged friendship that forms over the series.

Critics of television can often focus their assessment of a series on its finale (there is abundant literature concerning Breaking Bad’s recent finale). Like a novel, I think the only criteria for a series finale, is that it remains true to its premise and characters. In this way, like every episode, it can be seen as a synecdoche, a small part reflecting the greater whole. Eastbound and Down achieved this when it ended its run. Originally, the creators planned to end the series after season three, with the narrative somewhat neatly wrapped up. However, HBO surprisingly renewed the    show for a fourth and final series. To an extent, this wiped clean the narrative slate and allowed the writers to go in any direction they sought fit. In retrospect, this was a brilliant decision, and allowed Kenny to be fully realised on screen. It also added scope for mainstays, Stevie and April (Katy Mixon).

Season Four adds a layer of emotional depth to Kenny while remaining true to the previous seasons. With the chances of a professional baseball career comeback becoming increasingly unrealistic, the writers decided to appropriately give Kenny the beginnings of a media career, on a typical sports talk show. This run of episodes was split, directorially wise, between Jody Hill and David Gordon Green (All the Real Girls, Pineapple Express, Prince Avalanche). Both directors add their own brand of poignancy and introspection to the series. Kenny goes to dark places in this final season.

While I champion the series as strongly as I do, I’m not blinded by its weaknesses, and it does have several. Eastbound is certainly a show that focuses itself on white masculinity to the detriment of other characters. It could be argued the show never really explores a female presence. Kenny’s love interest, April, is the strongest female presence. However, for the most part of the show, she is treated as an inferior, sexual object, something that Kenny can discard when it suits him. The final season of the show rectifies this somewhat, giving April more screen time and a greater subjectivity that Kenny really comes to value and respect. Similarly, the main cast are mostly White/Judeo-Christian, to the expense of all else. There are constant jokes and mockeries of other racial and religious characters (and stereotypes abound). Even Stevie discounts his Mexican wife and children, in one scene agreeing with Kenny that “four Mexican kids are equal to two white kids.” But, this is the show McBride and Co. wanted to create. A no-holds-bar comedy examining the shrinking middle class in America, obsessed with sports, money and fame, and still deeply embedded in a staunch white masculinity. There is enough interest and social comedy there to retain our unwavering attention. And to this end, the show triumphantly succeeds.

Rock critic Lester Bangs described the aura of the Stooges as ‘an errant foolishness that effectively mirrors the absurdity and desperation of the times, but, … they also carry a strong element of cure, a post-derangement sanity’. Eastbound and Down can most certainly be viewed as mirroring the absurdity and desperation of the American middle and lower classes, its fears of the Other, be it racial minorities, gender or sexuality. That unwavering American Dream is still being ravenously pursued, but as desperation ensues, the hyperbole of performance intensifies. In the denouement of Eastbound we witness a transformation of Kenny. Amid the desperation and absurdity, there is a quiet sanity present, a humility that grows, transcending financial markets, bank balances and class constraints. In this self-perpetuating ‘Golden Age of Television’, Eastbound and Down deserves its place amongst the canons of great television shows.