The fourth of May is hopefully soon with you 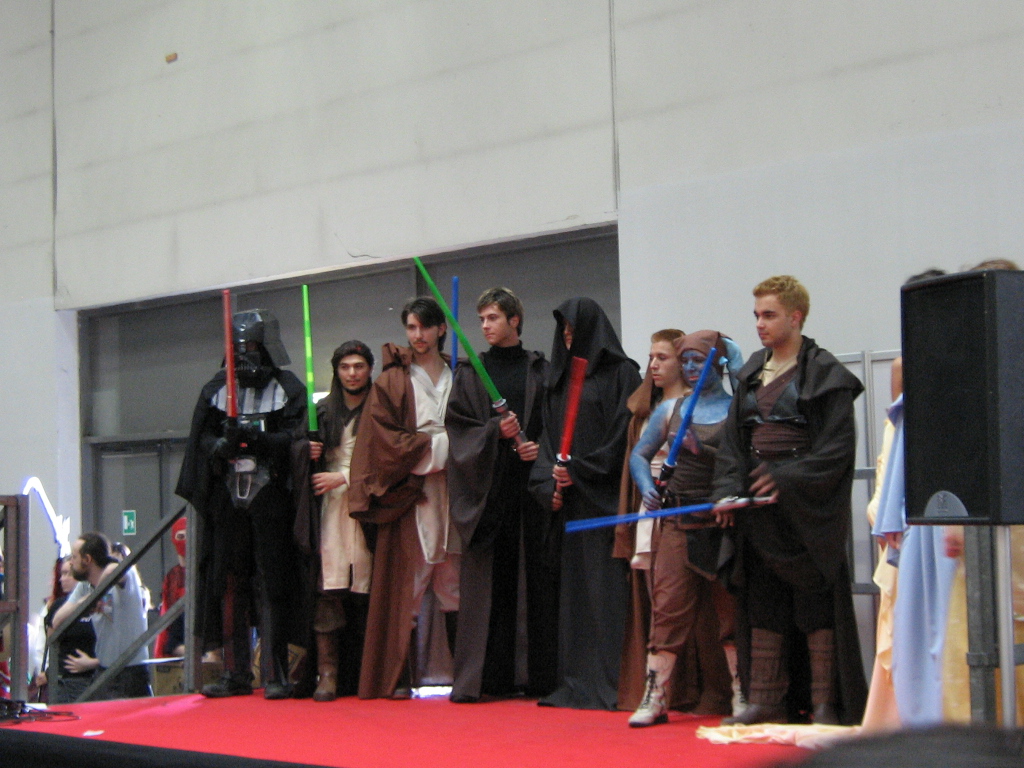 The cast of the upcoming Star Wars sequel was recently announced, but the bigger news we’ve already known for some time – George Lucas will not be directing any more Star Wars films. ReelGood thought we’d take the time to celebrate this grand fact by looking back at some of the bigger crimes that George Lucas has committed against the beloved franchise and against the fans without whom he would not be where he is today.

15 | The Romance in Attack of the Clones

“I don’t like sand. It’s coarse and rough and irritating and it gets everywhere. Not like here. Here everything is soft and smooth.”

Try saying that to your significant other in real life and see how far you get. I guess we can all thank our lucky stars that none of us have ever been seduced by George Lucas, but watching Anakin and Padme’s woeful excuse for falling in love is perhaps the next worst thing.

“Well, there are two banthas down there, but I don’t see any– Wait a second, they’re Sand People, alright.”

The sound Obi-Wan Kenobi made in A New Hope to scare of the Sand People was always reasonably odd in the first place, but George Lucas decided to make the elderly Jedi sound like a college student on Spring Break for the more recent BluRay release.

13 | Boba Fett’s voice change in The Empire Strikes Back

We at ReelGood feel that George Lucas got fairly lucky with Boba Fett and the enormous fan base the character amassed considering his minimal amount of screen time. There was just something not quite right though, something that nagged at Lucas for decades. When Temuera Morrison was cast as Boba’s father Jango Fett for Attack of the Clones, the answer must have struck him straight away – Kiwi accents…more Kiwi accents.

Less a bad change and more completely unnecessary one, Luca decided to add a couple of extra rocks in a shot of R2D2 in A New Hope. It’s as strange as it sounds. What’s more is than Lucas wasn’t all that committed enough to the ambitious idea because in the next, wider shot the new rocks have magically disappeared.

“When my age you reach, look as good you will not. “

Lucas’ obsession with Computer Generated Images has been the subject of much debate, but it’s his ridiculous use of CGI to boost the physical prowess of Jedi Master Yoda that really gets to ReelGood. We watched Yoda jump around with his lightsaber like a little leprechaun with a sinking heart. Dagobah may never be the same again.

George Lucas did not write or direct The Empire Strikes Back or Return of the Jedi. That the quality of those two films far outstrips that of any other Star Wars film is not a coincidence. Lucas has a reasonable imagination, but he is an abysmal filmmaker. Watch the clip below for further proof.

“Come on Mala, let’s see a little smile. Come on…”

The Star Wars Holiday Special may be the only revenge we ever get on George Lucas. He’s mentioned in the past that if he had the time and a sledgehammer (which we’re pretty sure he could afford) he’d destroy every single copy of The Holiday Special. Funny, because that’s sort of how we feel about some of the things on this list.

8 | Blinking Ewoks in Return of the Jedi

“But these are my friends.”

What sort of man watches Return of the Jedi and thinks ‘Gee, it’s almost there isn’t it? We’ll obviously need to add eyelids to the Ewoks though. You’re all feeling me on that one, right?’

“Jabba, you’re a wonderful human being.”

Lucas had filmed a scene with Han Solo and Jabba the Hutt (who was supposed to be some tall, hairy fella) back in the 1970s for the very first Star Wars film. He ended up cutting it out, because it didn’t work. It still didn’t work in the 1990s, but Lucas decided to put it back into the Special Editions, because this was around the time when he started making terrible decisions. Some historians date it as far back as 1986, when Howard the Duck was released.

6 | Jabba’s band in Return of the Jedi

“You will soon learn to appreciate me.”

Much like the Kennedy Assassination or the death of Osama Bin Laden, we all remember where we were the first time we watched the Max Rebo Band burst out into a hearty rendition of ‘Jedi Rocks.’ Because George Lucas understood that one of the biggest problems with the undoctered Return of the Jedi was that the rescue of Han Solo wasn’t punctuated by a group of aliens singing a big band funk tune.

Darth Vader is undeniably one of the most iconic villains of all-time. Nothing that George Lucas presented to ReelGood about Anakin Skywalker during the prequel trilogy convinced us that the snivelling little shit was capable of turning into one of the most powerful Sith Lords of all time. Considering Anakin’s gradual turn to the Dark Side of the Force was the chief focus on the newer trilogy, it’s astonishing George Lucas managed to get it so wrong. Well, considering this list it might not be so astonishing after all.

4 | Midi-Chlorians in The Phantom Menace

“It was possible he was conceived by the Midi-Chlorians.”

Remember back in 1999, just before The Phantom Menace was released? Remember when you thought to yourself ‘Gee, I hope the mystical power of the Force is explained so that it completely loses it mystery.’ You lucky thing, you got your wish!

Do we really need to explain this one? George Lucas, you’re a dumb asshole. Gradually reducing Jar Jar Binks’ screen time over the course of the prequels is probably about as close to an apology as we’re going to get.

“Sorry about the mess.”

Perhaps the most debated topic on the internet, the inclusion of a first shot from Greedo in A New Hope sent legions of Star Wars fans into a mad fury. The whole idea is that it completely changes how the film establishes the character of Han Solo, who was a complicated loveable rough. ReelGood is inclined to think that some of the other entrees on this list are worse, but the sheer exposure of this Special Edition tweak earns it the number 2 spot.

1 | Sebastian Shaw in Return of the Jedi

“Tell your sister, you were right!”

Perhaps the biggest crime in the history, and we means that with total seriousness, was the alteration of the final scene of Return of the Jedi. Luke looking out of the Ewok village to see the ghosts of Obi-Wan, Yoda and his father smiling back at him is one of the greatest moments in the trilogy. George Lucas decided to rub shit in all our faces by taking away the original version of Anakin, played by Sebastian Shaw, and replacing him with Hayden Christensen, after it had already been resoundingly established that everyone thought Christensen’s portrayal of Anakin in the prequels was a load of crap. But really, it’s the heartbreak when the music and the magic moment is really working their magic and you’re starting to think ‘oh, maybe the Special Editions aren’t so bad after all.’ Then BAM! Hayden Christiansen. End Credits. Fuck you George Lucas.