When you gotta go… 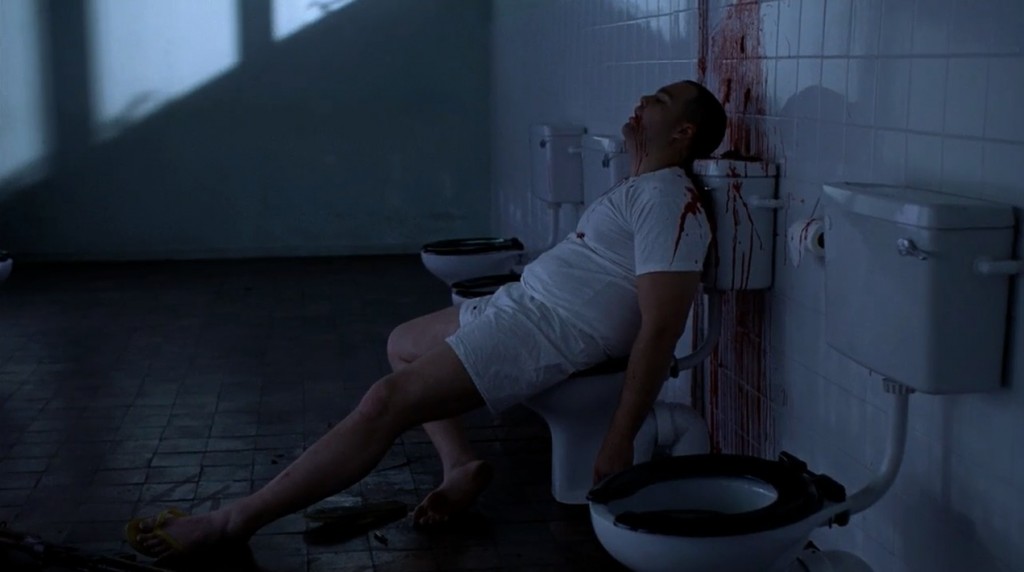 Lavatories, restrooms, toilets…whatever you want to call them – bathrooms play host to some of the funniest scenes in movie history, as well as some memorable moments of iconography and intensity. Here are the Top 10 Bathroom Scenes that will make you laugh, shudder and vomit…

While the movie often fails to hit the mark, there is this jewel of a bathroom scene in which the concept of the film is most fruitfully played with. Two black cops must imitate ‘white chicks’ in order to stop something or other, which they succeed at until they just can’t hold in their manly toilet issues.

The eclectic American Hustle was inconveniently released at a similar time to Wolf of Wall Street, the latter giving most audiences their fill of retro excess. The movie was therefore disappointingly overshadowed, but it certainly should not be forgotten. It holds ownership to some juiced-up and invigorating moments, including this lustful, frantic nightclub toilet scene where two of our leads commit to an adulterous relationship.

Moaning Myrtle was unfortunately forgotten after this fourth Potter instalment. Here she spies on and bothers a naked bathing Harry as he tries to unlock the secrets of a big golden egg. This makes the Top 10 merely for Myrtle’s adorable and irritating squeaky cough.

One of Stanley Kubrick’s later movies was a strangely split affair, the first half significantly better than the second as it tracked new military recruits at boot camp, under the jurisdiction of the foul-mouthed and constantly-irate warden. This first half comes to a crescendo when one of the recruits turns nasty due to the ‘horror of war’…in a bathroom.

The scene that captured the world way back in 2011 – a group of try-hard bridesmaids feel the effects of food poisoning during a dress shop visit. The sight of Melissa McCarthy relieving herself in a sink takes a while to dribble from your mind.

While The World’s End didn’t quite match up to the classic Shaun of the Dead (is it even possible?), it sure sported a thumping-good bathroom fight scene, including the moment where the movie shifts from being a Comedy to a Comedy-Sci-Fi-WTF. It packs a serious punch considering all the actors are 40+, out of shape comedians.

The quintessential toilet humour scene is not from Bridesmaids but in fact from the original architects of gross-out-humour – The Farrelly Brothers. The scene is funny, yet stupidly simple – Jeff Daniels has been spiked with laxatives. Often imitated, never bettered.

After The Raid blew us all away, you could almost hear the creators’ brains whirring, trying to dream up other claustrophobic spaces to stage battle. Bettering some of Hollywood’s best efforts in Bourne and Bond, The Raid franchise sports a collection of the finest close-quarters combat seen in film. This might just be the finest.

Back when it was cool to like Jim Carrey it seemed he would do anything with his body to generate laughs. Every character he played adopted his trademark rubber-limbed style, best displayed here in this brutally funny bathroom scene. In an attempt to get out of a lose-lose court case, lawyer Carrey decides to ‘kick his own ass’ in the bathroom. He certainly succeeds.

What is a list involving toilets and the movies without the ‘Worst Toilet In Scotland’ – one of the most iconic scenes of all time? Nowadays, it’s easy to forget just how repulsive, delirious and hallucinatory the scene really is. Watch it, worship the peerless set-design and marvel upon a young Ewan McGregor who took risks, not just Salmon Fishing in the Yemen.