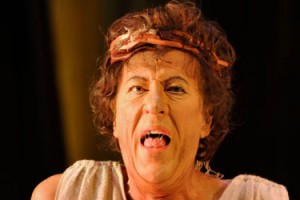 Just let that picture sink in for a bit. Geoffrey Rush’s presence in a film is almost enough to completely put me off seeing it. Have a good think about any performance of Rush’s you know. Can’t you just feel him acting? I’m happy to concede he’s very good at naturally cartoonish characters (Shakespeare in Love, Pirates of the Caribbean), but give the man a role that requires a bit of subtlety and he’ll find a way to suck that subtlety right out of it. Rush is one of those ‘ACTORS’ (read that word in a booming voice filled with gravitas while making wavy hand gestures) that love talking about their ‘craft’ and pretending that acting is an important occupation. These sort of actors always seem to be the worst offenders when it comes to overacting (Sean Penn, I’m having a long hard stare at you, man). Living in Melbourne over the past few months has been unbearable because every second turn there’s a poster of the Rush wearing a toga with a dumbass look on his face. Have another look at that picture above and tell me I’m wrong. 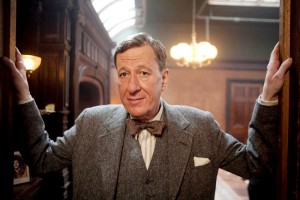 I thought I may as well whack another irritating photo of Geoffrey Rush up. The only thing more annoying than GR in this film is the fact that it won a buttload of Academy Awards. Colin Firth playing a stuttering Colin Firth beat Gary Oldman as George Smiley in the Best Actor Category?? Wrong again, Academy. I don’t know why period dramas automatically get you a Best Picture nomination and playing somebody famous gets you an acting nomination, but that’s just the way it is. The King’s Speech wasn’t a bad film, by any means, but it is another example of the Academy’s tendancy to throw awards at average films. 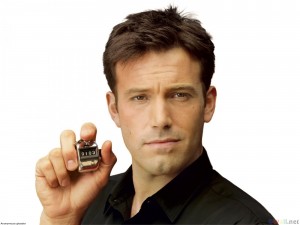 I mean come on, give me a fucking break. There’s a growing trend in Hollywood to celebrate and reward mediocrity. I don’t want to give the impression that I think Affleck is a bad director. Not at all, I think he has quite a bit of talent, but people are getting hysterical about the guy. All this ‘Affleck’s done it again!’ crap. Done what again exactly? Made another OK film? You can’t convince me Red Rooster is KFC no matter how hard you push it.