I don’t hate Rian Johnson’s films, but every couple of years or so he releases an average flick and people start celebrating like 7/11 is handing out free slurpees. The music in Brick was great, Brick was not. Mark Ruffalo was incredibly dashing in The Brothers Bloom, the actual film was ok. Also I would have been more than happy to suspend my disbelief and ignore the fact that Joseph Gordon-Levitt doesn’t look anything like Bruce Willis rather than sit through two hours of that horrible make-up in Looper. The first half of Looper is actually pretty cool, until Damien from The Omen and the receptionist from The Devil Wears Prada rock up and they live in a corn field. 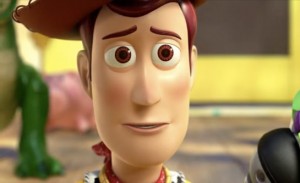 Let me guess, Andy left the room for two minutes

Somewhere out there, there has to be someone who’s with me on this one. I actually think that PIXAR is overrated in general (except for WALL-E, god bless the little fella. He just bloody loves cleaning). Bring back the 2D Disney flicks from the 90s, that’s what I sometimes have said to people on a few occassions.

But let’s narrow this down to Toy Story, and I’m talking the whole trilogy here. These movies are stressful. Every film, the toys put their foot in it from the get go and the stress doesn’t let up until they get back to that Andy kid right at the end. Which brings me to my next point; Woody. You’ve got to let go, man. All the other toys have. Even Buzz is cool with a no-Andy scenario. EVERY SINGLE FILM Woody loses it about Andy getting a new toy or Andy going away or Andy growing up. Move on. Think about this; we’re getting very small glimpses into the lives of these toys, imagine how much Woody talks about Andy when we’re not watching?

There’s being somebody’s toy and then there’s creepy obsession. Woody isn’t that far off Robin Williams’ character in One Hour Photo. I could definitely imagine him sniffing Andy’s belongings and being pretty happy about it. While writing this, I’ve decided I hate Woody. I can’t even look at that picture without getting angry. In Toy Story 4 Andy should burn him and be done with it.

Think about this long and hard. When has Hugh Jackman actually been good in anything? Don’t say X-Men or Les Miserables if you don’t want to be incredibly wrong. Ol’ One-Emotion Hugh, that’s what they call him. Or I’ve decided to call him, as of right now. I’m pretty sure he only won that Golden Globe because of the scene in Les Miserables when his face is covered in so much human shit you can only see the whites of his eyeballs. Great scene.

Every now and then Hollywood tries to force certain things on us, like Ryan Reynolds as a leading man (really though, just let it go and we can forget all about it). Just because Hugh Jackman’s a ripped unit doesn’t mean he should be given macho roles. Throughout the entire X-Men series, there’s a dangerous twinkle in Jackman’s eyes threatening a hearty rendition of ‘There’s no business like show business’. Also, I just Googled him and the top two news stories were ‘Hugh Jackman helps Church’ and ‘Hugh Jackman helps deliver babies.’ Think about those headlines and then have another look at that photo and tell me you still like him.