Welcome to Recast This, the only thing ever in existence ever to retrospectively contemplate casting changes. For our first Recast This, we’re tackling the original Star Wars trilogy, in honour of all those miscast actors in the new Star Wars trilogy. This is Star Wars, as done correctly by the ReelGood team.

Sure he’s no spring chicken, but if there’s one complaint we have about Hamill’s Skywalker is that he’s a bit of a wuss. Russ’s gruff demeanour would more than sort that little problem out. We’d also tweak the story slightly to pander to Crowe’s strengths. Instead of being a starry-eyed youth who embarks on the quest after his adoptive parents are murdered, Skywalker is now a bordeline-alcoholic hooligan who just enjoys travelling around getting into punch ons. Russ’s Skywalker certainly wouldn’t be taking any of that ‘death sentence on twelve systems’ crap from Cornelius Evazan in the Cantina scene. Additionally, we’ll get rid of that hack John Williams and get 30 Odd Foot of Grunts to do the main musical theme. 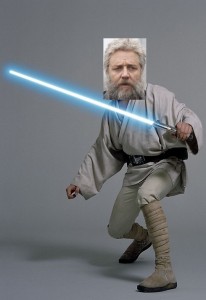 Walken was apparently considered for the role of Han Solo way back in the 1970s, but actually we think he’d be much better in the role of old Ben Kenobi. A re-imagining of the lightsaber handover scene in A New Hope would see Kenobi produce the weapon from his ass and explain that he’d been keeping it up there for decades.

Sean Penn has already been acting like a little princess for most of his off-screen career, so we’re thinking it wouldn’t be much of a stretch for him to keep doing in it in front of the cameras. Plus who doesn’t want to see Sean Penn’s home blown up by an enormous space station? “I felt a great disturbance in the Force…like a million voices suddenly cried out in joy.” A costume re-design might necessary for the Jabba the Hutt portion of Jedi. 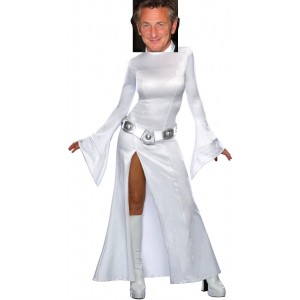 For the very first time the world could see just how evil Freeman is, something we at ReelGood have long suspected. We’d mix-up his Force powers a bit – in our version Vader uses Force-Long-Winded-Life-Lesson to choke Captain Needa to death. We’d also give Vader more of a twinkle in his eye, as well as the catch-phrase “Get busy livin’ or get busy dyin'”, just before he kills anyone. When Luke escapes from Cloud City sans his right hand, Vader looks of soulfully into the stars and says to anybody who’s happy to listen, “Some birds weren’t meant to be caged…..or maybe I just miss my friend.” 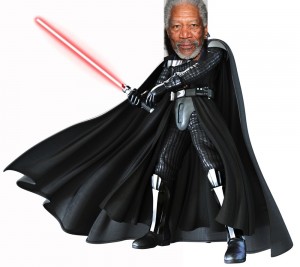 He’s already proved himself more than adept at making incoherent wailing noises, and we suspect Christopher Walken might be the only man alive who could interpret said noises, making Cage the perfect companion to Walken’s Han Solo. Also, the thought of Cage wailing while he carries around a broken Michael Cera à la Cloud City in Empire makes ReelGood laugh a lot.

“You gotta lot of guts coming here….after what you pulled!” Goldberg is a Star Trek veteran, so the move to Star Wars wouldn’t exactly be light years away. We could definitely image her sassing it right up with Admiral Akbar (we’ve narrowed casting down to a confused looking Channing Tatum or Billy the Bass). Or we could throw a dog a bone and just let Billy Dee Williams come back – for the price of his soul and his first born daughter, and a vial of his blood.

The physical resemblance is striking enough for Buscemi’s name to be thrown into the mix, plus he’s been getting his evil on recently in HBO’s Boardwalk Empire. We’d lighten the character up a bit though, and base our interpretation of Palpatine on Buscemi’s cameo in The Wedding Singer. “Best Sith Lord in the World! Self taught, no lessons!” 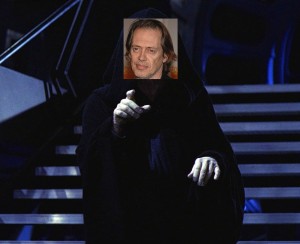