He didn’t say it…and neither did I. 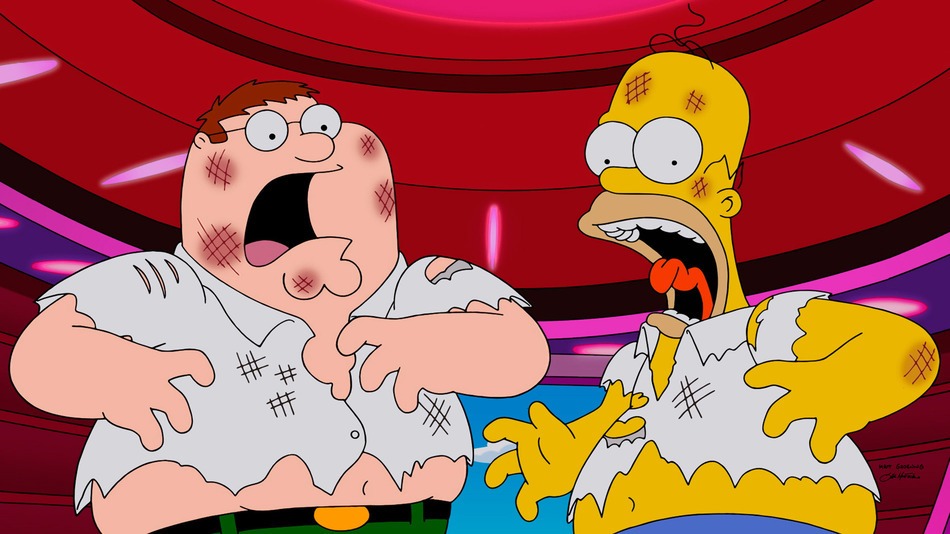 “The Simpsons Guy”, the premiere episode of Family Guy’s thirteenth season and the long awaited crossover between animation heavyweights Family Guy and The Simpsons, aired across the globe this week. It must be said that the hour-long production is definitely a Family Guy episode, with all of the studio animation, storylines and resources (other than voice-acting) being provided by Seth McFarlane and co. Many fans were curious as to how well the crude, satirical and bawdry comedic style would clash with old fashion Simpsons laughs. However the episode serves as Seth McFarlane’s homage to The Simpsons, its influence and remarkable television dynasty rather than as a bout for animation supremacy. Concerns were also raised over what the public perception of a crossover episode would be, in that it would be labeled a marketing ploy, a sign of desperation, so much so that the episode itself actually mocks the intentions of crossover cartoons in an opening monologue by Chris. In actual fact, the episode is a result of a pitch to The Simpsons executive producers’ spearheaded by Richard Appel, a former Simpsons writer from the ‘glory days’ who’s now a Family Guy producer. However whether intentions were purely creatively driven, depends on whom you ask.

The story follows Peter after he gets work drawing a comic strip for the Quahog newspaper titled “For Pete’s Sake” offering his two-cents on the world. After a particularly amusing yet misogynistic panel compares a battered woman to a broken dishwasher, Peter finds himself in hot water. This is in itself a commentary on a common criticism of Family Guy in that it is a sexist, misogynistic show unable to write female roles. As the town’s women turn against Peter, the Griffin’s decide to take a road trip until the heat dies down. When their car is stolen whilst refueling at a highway gas station, the Griffins find themselves stranded in Springfield. After getting along swimmingly with the Simpson family at first, Peter and Homer argue over the authenticity of Pawtucket Patriot Ale, Peter’s beer of choice. Homer exclaims that it’s a “lousy rip-off” of Duff beer causing a heated legal battle between the cartoon universe’s biggest beverages, itself an allegory of the shows and their obvious similarities.

The episode’s strength is it’s self-deprecatory nature, a testament to the writers for finding a narrative that would allow this to flourish. The legal battle serves as the spoon-fed metaphor that Family Guy is a little too derivative of the Simpsons. Imitation is the sincerest form of flattery and “The Simpsons Guy” is a feast of fan service, full of major Simpsons hallmarks, albeit the bulk of them happened almost 20 years ago. It’s not an entirely unique or adventurous narrative for a couple of televisions series that boast a combined 37 seasons, but it resonates with long-time fans more so than occasional observers. A look at my top three memorable moments: 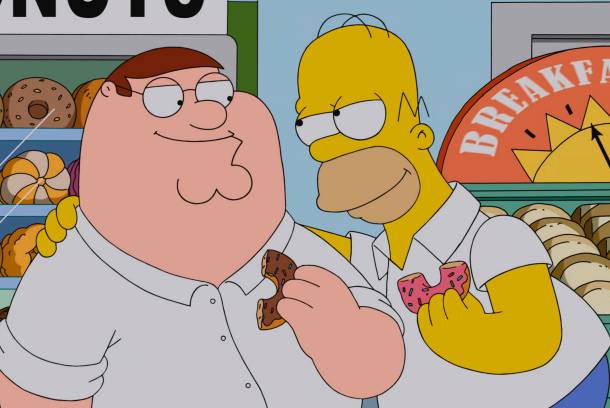 In typical Family Guy format, Peter introduces the cutaway gag, “Homer Simpson and Peter Griffin are an even greater team than the airforce.” The scene shows Homer and Peter flying a plane together before Bob Belcher of Bob’s Burgers pops up making a guest appearance. Homer asks what he is doing in the plane to which Peter replies, “We gotta carry him because he can’t fly on his own, we let that other guy try and look what happened.” Cleveland is then shown piloting a plane solo eventually crashing in a similar fashion to the often-repeated Cleveland bathtub gag. The scene references Bob’s Burgers particularly low ratings and the recent cancellation of The Cleveland Show.

In the episodes ensuing Duff v Patriot Ale court case of which Fred Flinstone is the judge, hinting that both Simpsons and Family Guy are both derivatives of the classic Hannah Barbara cartoon, many crossover cast members are seen sitting side by side with one another. Kent Brockman and Tom Tucker, Consuela and Bumblebee-man, Quagmire and Lenny, Carl and Cleveland, Principal Skinner and Principal Shepherd and Mr Burns holding Bobo next to Stewie holding Rupert amongst others.

A classic chicken fight with Homer replacing the giant chicken for the Springfield leg of the bout. A swap over quote moment when Peter shouts “Woohoo” only to then be kicked by Homer who says “Roadhouse” was a nice addition.

It was disappointing to see little input on the Simpsons end of the scale, a melting pot of ideas perhaps would have served up a better and more thorough examination of the rival cartoons, particularly what the Simpsons brain trust would have done with Brian and Meg, who play minor roles in the episode. All in all, as a long time fan I view the premier episode with a certain level of bias, as a stand alone production it isn’t particularly special, however watched in context with a stockpile of Family Guy and Simpsons seasons, the old school references and crossover quotes really drive it home. It may just be the most-meta production to ever grace our screens.