“All men must die…but we are not men” 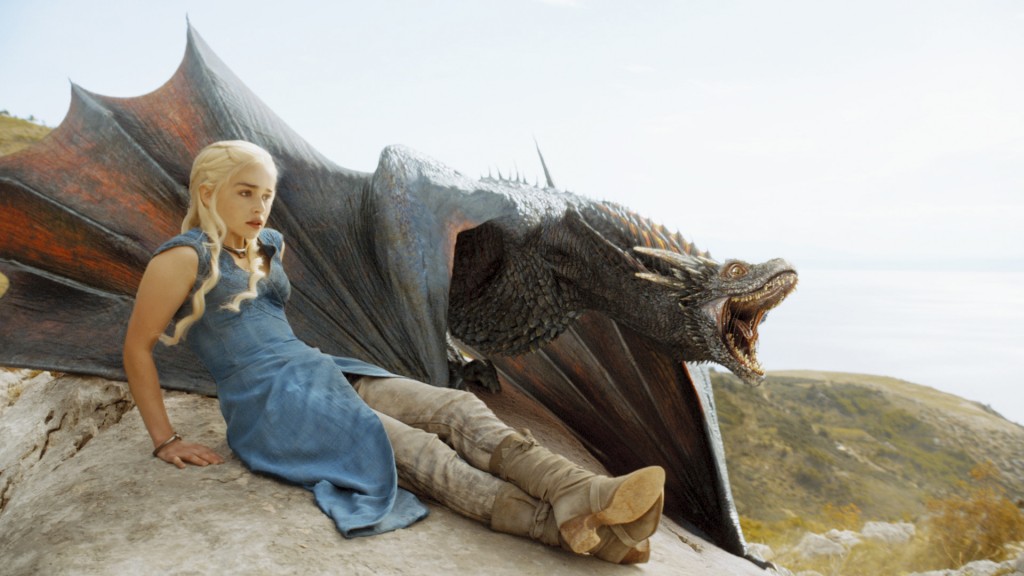 Though I have a great deal of love for the deliciously complex male characters of Game of Thrones, it’s the women on the series that I truly admire. Being a woman in Westeros immediately puts these characters at a disadvantage. They are frequently subjected to numerous atrocities like rape, coerced marriages, ridicule and emotional and physical torture. Let’s also remember that most of the women on this list have witnessed their loved ones die in some of the most horrible ways possible. In the world of Westeros, women are perceived as the weaker sex, but these female characters are as brave, if not more so, as their male counterparts. From queens, to high ladies, to wildling women, regardless of their stature, these women embody strength and empowerment in all its forms.

Catelyn Stark is a character whose strength and bravery is largely internalised. However, there’s a great deal of fierceness to her, and this moment offers us the first real glimpse of her protective instincts in regards to her children. As Bran lies unconscious and crippled in his bed, an assassin is sent after the boy to give him a “clean” death. When he charges for her comatose son with a dagger, Catelyn springs into action, trying to fight off the nameless attacker. Pretty standard motherly instincts, so what makes the moment so badass? Well, when the assassin holds the dagger up to her throat she clutches the freaking blade with both hands and bites into his thumb like some feral animal. It’s gruesomely awesome. 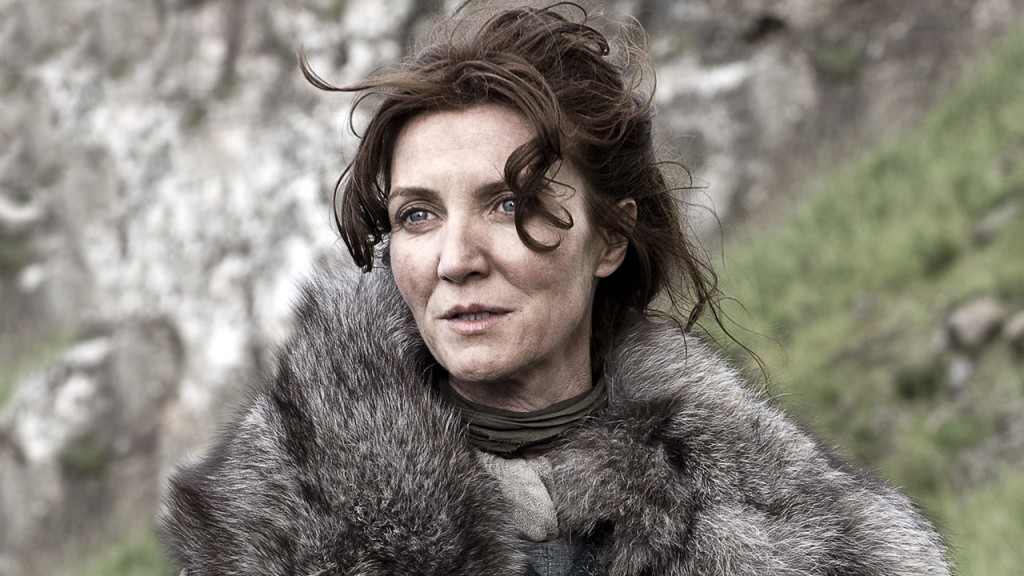 As part of a Dothraki pregnancy ceremony, Daenerys must consume (and keep down) an entire horse heart. This scene is truly disgusting to watch, particularly the moment when Dany gags – which was allegedly a genuine reaction from actress Emilia Clarke. However, she manages to chew and swallow the whole thing, asserting herself as a true Kahleesi among the Dothraki. The look of pride on Drogo’s face is wonderful in itself, but what really makes this moment so awesome for Daenerys is her brother’s realisation that she has earned the kind of respect from the Dothraki that a little weasel like him could only ever dream of. 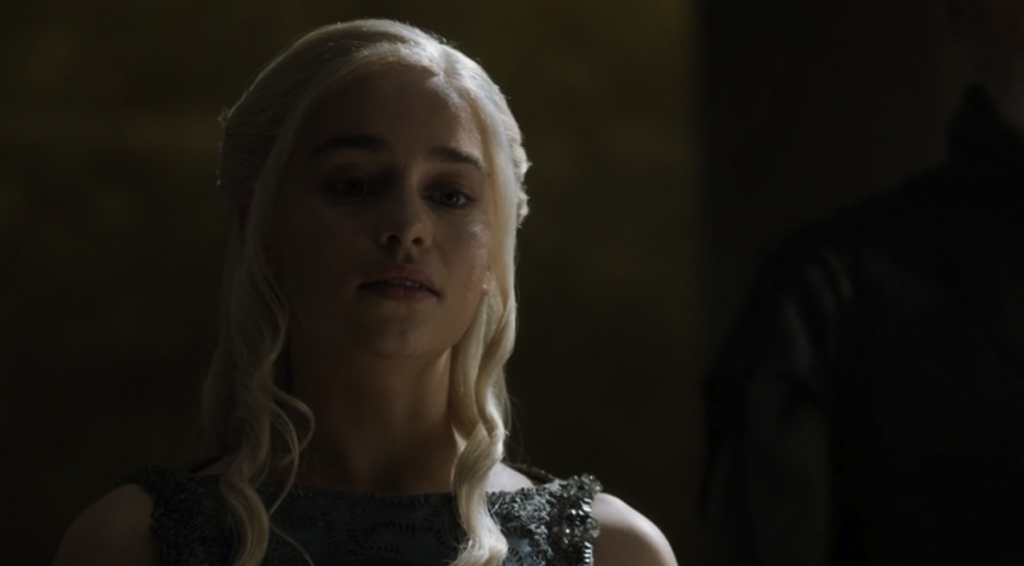 “And what of my wrath Lord Stark?”

In this pivotal scene from the first season, Ned confronts Cersei about the true paternity of her children. Rather than cower and deny his accusations, she proudly admits that the King’s supposed heirs are actually the product of her sexual relationship with her brother. It’s such an incredible scene, punctuated with a few rare, near vulnerable confessions from Cersei before she slides right back into her steely persona. Ned’s biggest misstep is to offer her mercy, explaining that he will allow her to flee King’s Landing before he reveals the truth to Robert. But Cersei is not a woman who shudders in the face of intimidation. Ned threatens to expose her and destroy her reputation as well as the Lannister name, and what does Cersei do? She basically dares him to. This is Cersei Lannister at her absolute best, and I challenge you to think of a more iconic quote from the series than: “When you play the game of thrones you win or you die, there is no middle ground.” 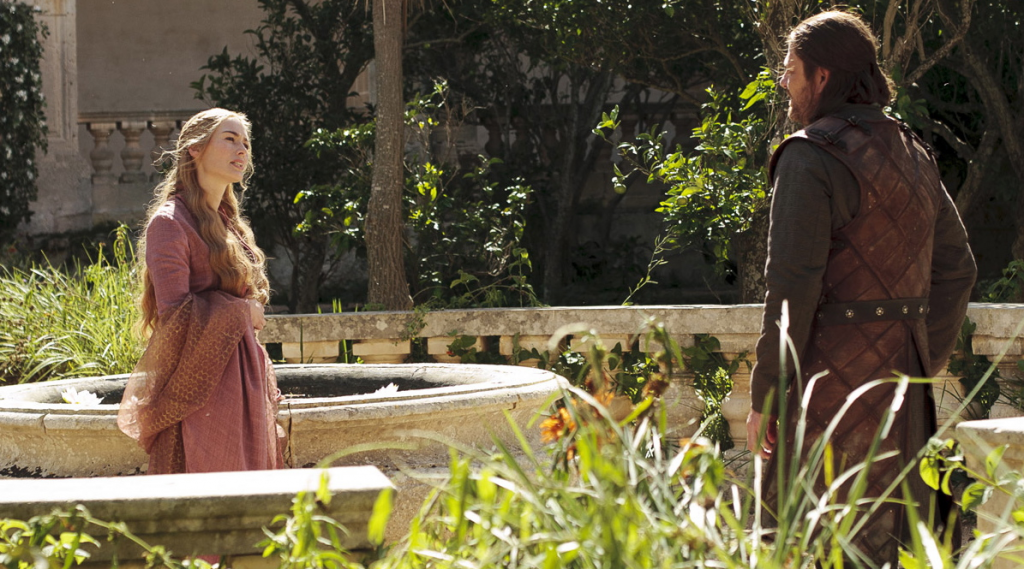 7 | Sansa prepares to push Joffrey to his death

Sansa Stark has never been a fan-favourite character. Particularly during the first three seasons, viewers complained that she was whiny, emotional and made stupid decisions; a stark (pardon the pun) contrast to her instantly loveable sister Arya. It was quite easy for me to dislike Sansa during the first season, but all of that changed after her father was executed. Being the deranged little bastard he is, Joffrey takes Sansa up to the walls of the Red Keep to proudly present her with her father’s severed head. Joffrey taunts her, promising to also give her Robb’s head, to which Sansa chillingly replies, “Or maybe he’ll give me yours.” As punishment for her words, Joffrey orders Ser Meryn to strike Sansa across the face. A moment later when Joffrey’s back is turned, Sansa stalks toward him, intending to push him off the Red Keep to his death.The intensity on her face is fantastic, and there is not a second’s hesitation. If not for an interference from The Hound, Sansa would have absolutely pushed Joffrey off the edge – damned the consequences, which would have meant her death. This might be a controversial choice in comparison to her transformation late in season 4, but for me, this moment was the turning point for Sansa’s character. 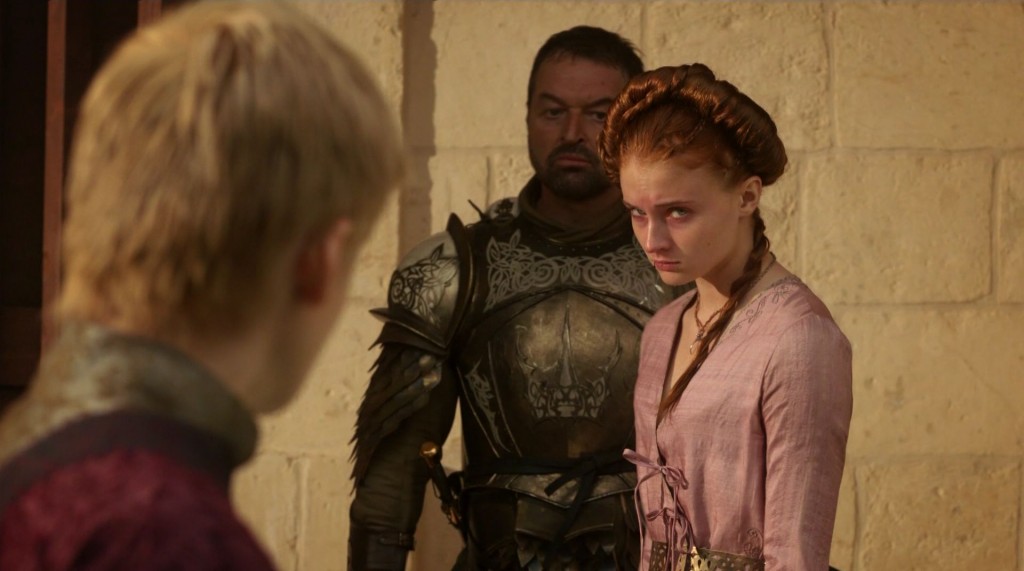 Season 2, Episode 5 – The Ghost of Harrenhal

Like a number of the women on this list, Margaery Tyrell doesn’t display her badassery through brute force. She’s cunning, driven, politically shrewd and a master manipulator. Over her time on the series, she has proven to be a key player in the Game of Thrones. This is a very brief moment that occurs midway through Season 2, shortly after Renly Baratheon’s death. Littlefinger refers to Margaery as “Your Grace” and she sharply points out the fact that if Renly was not a real king, then she was not a true queen. When Littlefinger asks her if she wants to be a queen, she simply replies, “No. I want to be the Queen.” It’s a great, understated moment that reveals to the audience just how ambitious and astute Margaery really is, and a strong indicator for her significance in the rest of the series.

After Theon takes Winterfell and Bran and Rickon hostage, Osha, already a hostage of the Starks, pledges her allegiance to Theon. Osha is incredibly perceptive and is quick to play on Theon’s weakness – his obvious lust for her. She sleeps with Theon and sneaks out of his chamber in the middle of the night where a guard tries to stop her. Understanding men the way she does, Osha plays the guard the same way she played Theon, only this time she slits his throat mid-kiss. Her apparent betrayal is revealed to be a diversion to smuggle Bran, Rickon, Hodor and the boys’ direwolves out of the castle. It is incredibly touching to see the lengths Osha will go to keep Bran and Rickon safe, especially considering she began as a prisoner of Winterfell. 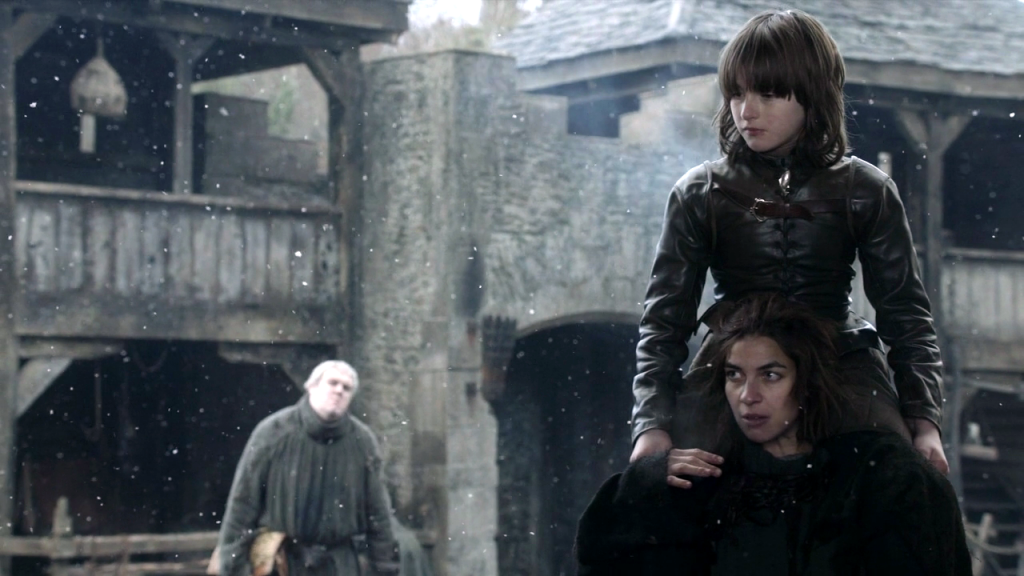 It is probably most easy to think of Brienne of Tarth as being a badass on the series, but I want to clarify, she isn’t awesome because she fights or duels like a man, but because she completely rejects the stereotypes put upon her gender. Jaime and Brienne have been squabbling since she took him prisoner and in this scene the two finally come to physical blows. While Jaime snarks his way through the sword fight, mostly underestimating her, Brienne moves methodically, without holding back. This isn’t just any knight Brienne is fighting, this is The Kingslayer, and it is immensely satisfying when she knocks him into the dirt as if he were a little boy with his first training sword. 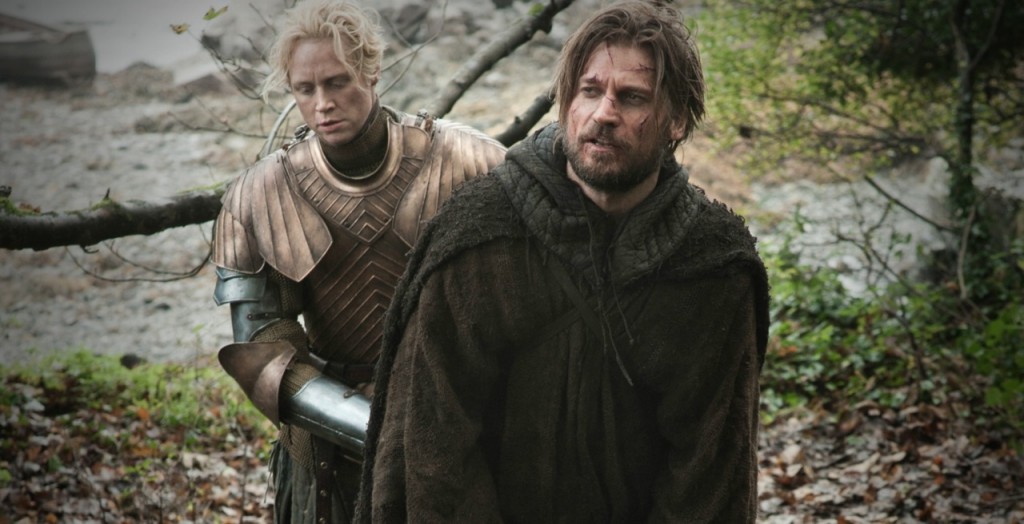 Season 3, Episode 4 – And Now His Watch is Ended

Has a single word uttered in this series ever sounded so badass? While Daenerys’ storylines across the Narrow Sea tend to drag (“WHERE ARE MY DRAGONS?” being a prime example), the last few moments of this episode made me sit up and finally pay attention again. In an effort to purchase the Unsullied Soldiers from slave master Kraznys mo Nakloz, Daenerys offers him her largest dragon as payment. This slave master is a literal scumbag with a penchant for referring to Daenerys as a “bitch” and a “Westerosi whore” in Valyrian. Daenerys hands over her dragon to the slave master, who again in Valyrian, refers to her dragon as “a beast”. Daenerys coolly turns around and informs him in perfect Valyrian that “a dragon is not a slave”. The expression on the slave master’s face when he realises that Daenerys has pulled one over him this entire time is priceless. Even better is the moment immediately after when Daenerys utters the word “Dracarys” and her dragon roasts the man alive. 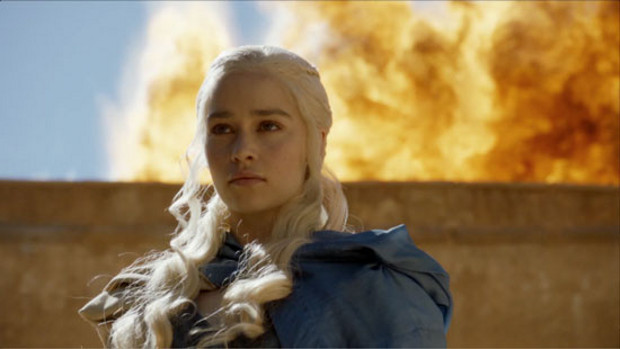 Arya Stark is a victim of circumstance, forced to grow up incredibly quickly in some of the most brutal ways imaginable. I often find it hard to remember that Arya is barely a teenager, but where other characters would have given up or died, Arya continues to survive. ‘Helpless’ is not a word I would typically associate with Arya, except during her father’s execution and the devastating Red Wedding. In the final episode of season 3 when Arya and the Hound are passing a group of men who are cruelly mocking her mother’s death, she sees her one opportunity for revenge, however small. She plays on the expectations of the men, letting them think she is the weak little girl they believe her to be. She seizes the moment, stabbing one of the men repeatedly in the neck. It’s both utterly dangerous and equally fearless, and viewers cannot help but cheer for her small victory in the wake of the Red Wedding. In all honesty, Arya could have had an entire list of badass moments dedicated to her, but this one is truly memorable. 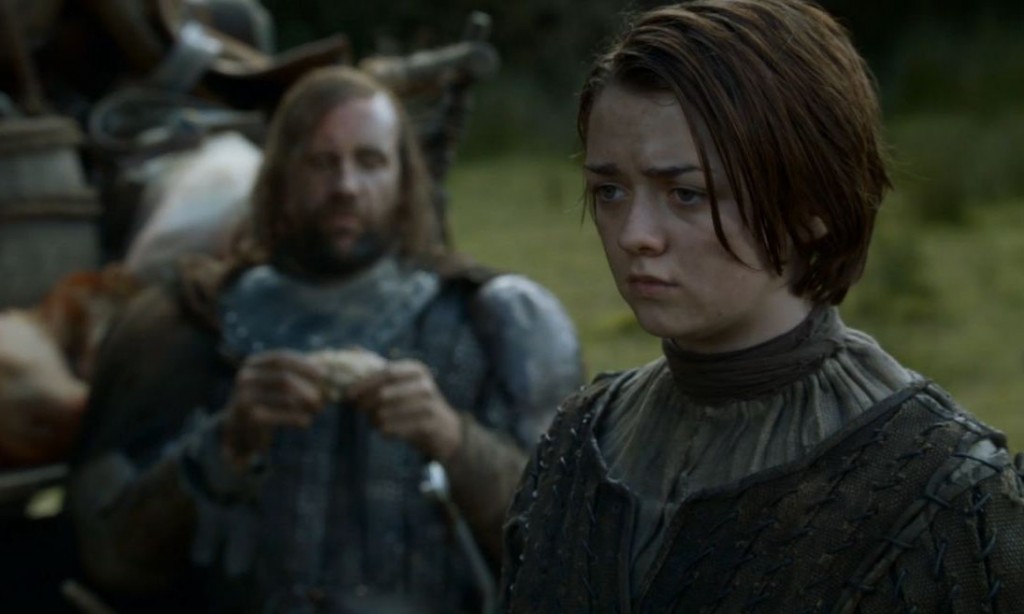 1 | Brienne Vs The Hound

Yes, this is the second time one of Brienne’s fight scenes has appeared on this list, but I simply couldn’t resist. In a complete deviation from the books, Brienne and Pod encounter Arya and The Hound along their quest to find the Stark daughters. Brienne fruitlessly attempts to convince Arya to come with her somewhere safe, but The Hound points out that she is delusional to think that Arya has anywhere safe to travel now that most of her family is dead. But Brienne swore to Catelyn Stark that she would retrieve her daughters and isn’t so easily deterred. What I love about this fight scene is that it really does begin with Brienne trying to fight with honour, but quickly devolves into a brutal hand-to-hand combat, with Brienne fighting just as dirty and desperately as The Hound. The sight of Brienne tearing off The Hound’s ear with her teeth is nothing short of marvellous. 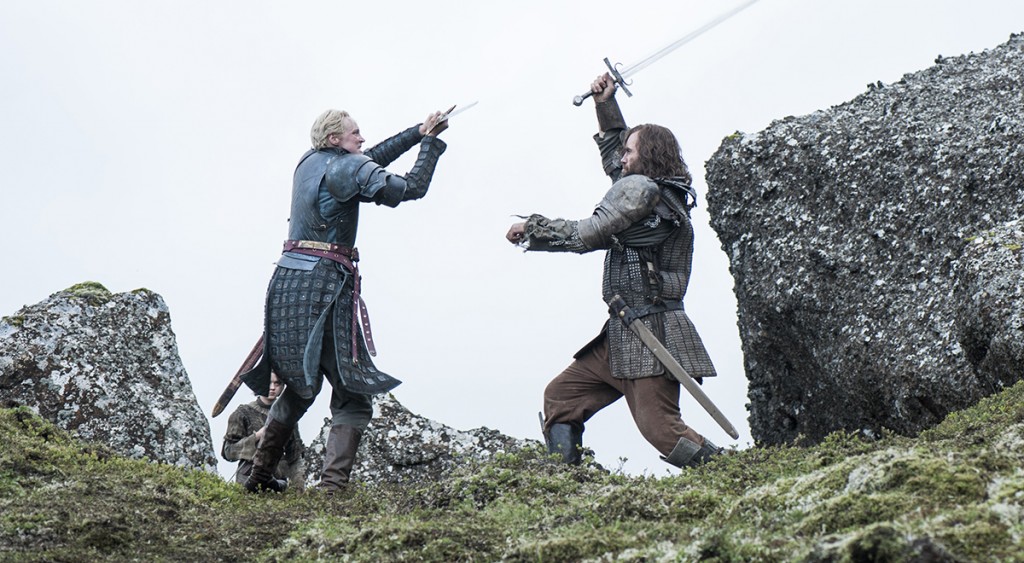