There are two types of people in this world: those who laugh at the sight of a disproportionately-massive biro penis jutting out of a politician’s mouth, and those who don’t. Larry Boxshall stands very much in the first camp.

A feature documentary based solely around a penis-related Facebook page may seem like a somewhat tenuous concept at first, however the director of Drawing Dicks on the Herald Sun: the doco is totally sincere in his mission to tell the story of this online phenomenon.

The Drawing Dicks on the Herald Sun concept was born on a Melbourne building site when two bored tradies started etching phallic scribbles across discarded Herald Sun newspapers. The drawings found their way online, a dedicated Facebook page was created and has since expanded into an axis of artistic virtuosity. Established artists regularly submit pieces with genuine artistic merit, one of which was recently sold to a fan for $300.

Boxshall explains how nobody seems to believe this doco is real, but he wants to assure everyone, it is.

‘I totally get it,’ says Boxshall, ‘when I pitch it to people as a feature, the look on their faces is, ‘what’s it going to be about?’ But the fact is, the film has already taken me on such wild adventures and I think that people are going to be really charmed by the story that we’re creating here.’ 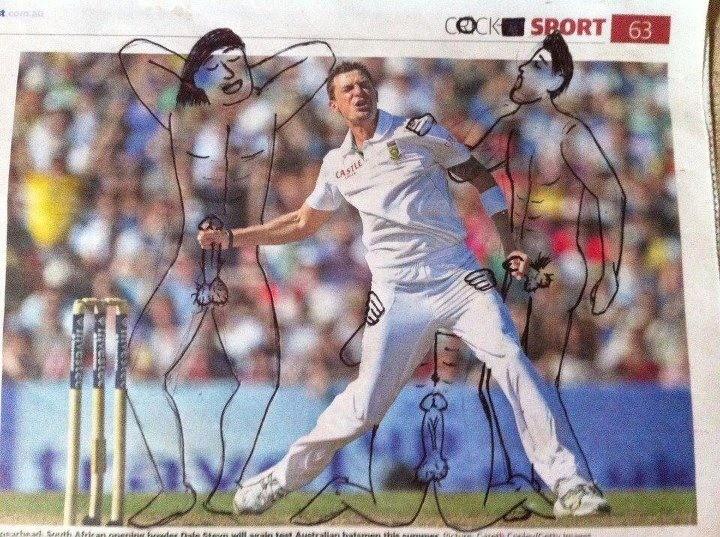 The first of a series of promo-trailers introduces Jonathan Edward Guthmann, artist and regular DDotHS contributor. The sincerity with which Guthmann speaks about the practice of dick drawing is striking, and perhaps the reason why such allegations of the film’s authenticity have arisen.

But this tone of sincerity is important to Boxshall. ‘I thought long and hard about it and I thought the best way to do it is to take it completely seriously, which I do…we’re going for a very realistic very respectful look at these people who draw dicks.’

‘There’s not much I can do as a filmmaker to make this funnier than it already is,’ Boxshall explains, ‘What I can do to make it funnier is to take it completely seriously. And that’s the only way to make Drawing Dicks on the Herald Sun funnier, because it’s already fucking hysterical.’

The narrative will mainly focus around Jeremy and Dylan, the tradies who initiated the phenomenon. The contributing artists will also be a focal point. Boxshall says he’s aiming for an all-encompassing approach, having interviewed with parents, partners and other peripheral people.

Boxshall is evasive on specific plot details. He explains he doesn’t want to give too much away. He simply says, ‘it’s all leading to something very specific. And I think people are going to lose their minds when they see where it goes.’

Drawing Dicks on the Herald Sun proves an interesting social study. Boxshall says he is fascinated by where people choose to wield their salacious ink. ‘It’s very curious,’ he muses, ‘we had one who painted a dick on Black Caviar and I think that’s really interesting, it’s such a popular horse and people loved it, I like the fact that we can put a dick on it.’

‘Everyone is up for grabs,’ he explains,  ‘it could be Kevin Rudd, it could be Tony Abbott, everybody has a dick on them. No bias.’

At the moment the crew is comprised of only Boxshall and Cinematographer Paul Commisso. ‘It’s very skeleton,’ says Boxshall of their operation. He speaks highly of his DoP, ‘his cinematography is just breathtaking, he really knows how to wield a camera.’ This is something that is made obvious in the artistically shot mini trailer.

If all goes to plan, Drawing Dicks on the Herald Sun: the doco is scheduled to enter the festival circuit next year. Boxshall says he is content to opt for a festival film, he doesn’t have aspirations for a wider release, ‘there might be too many dicks in it for television,’ he laughs.