The Documentalist speaks to David Estcourt, the director of a documentary covering the overwhelmingly successful grassroots candidacy of Cathy McGowan in the north-east Victorian electorate of Indi.

It’s been a tense few weeks in Indi. As the rest of the nation has shrugged off election campaign anxiety and settled in to their new political fate, the votes in the northeast Victorian seat have taken almost two weeks to be counted.

Filmmaker David Estcourt has been documenting the campaign trail in the unlikely rural electorate, which has provided one of the most remarkable stories of this year’s election. Held by conservative parties since the 1930s, this time around the race in Indi was between independent candidate, Cathy McGowan, and current Liberal member, Sophie Mirabella, who has held the seat since 2001, but with a steadily decreasing margin.

The mention of Mirabella’s name elicits a strong reaction in people. In a candid moment on Insiders earlier this year, outgoing MP Tony Windsor said of Mirabella, “She wins the nasty prize…The people of Indi, just have a look at your representative and see how much better you could do.” A comment that subsequently went viral.

Estcourt says McGowan is handling the final moments of the campaign well, “Cathy’s a workhorse, she’s been doing, 12 to 13 hour days for the last month. It’s remarkable how much energy she has and how she seems to keep going and going and going. It’s been really great, being able to capture her energy”.

Assisting Estcourt on the doco is producer Rebecca Hanssens-Reed from Philadelphia in the US and sound technician Jamie Carolan who is – along with Estcourt – based in Melbourne. Collectively they have experience in journalism and doco-making, but have never been in a directorial role. “This is really the first time we’ve actually been able to follow our nose and chase down things that we wanted to chase down,” said Estcort, “and that’s been a huge learning experience for us.”

Since arriving in Indi the filmmakers have been consistently pulling 12-hour days. They have spoken to every candidate running in Indi, except Mirabella, despite repeated interview requests. However, Estcourt managed to sneak in to the Liberal member’s invitation-only election night party press pit. “I was among Channel 7 and Channel 9 and Prime and the ABC and they’ve all got those huge shoulder camcorders and I was just standing there with an SLR,” he says.

Estcourt’s interest in Indi was piqued when the campaign strategy was being conceived in Melbourne. “I know it sounds really stupid,” says Estcourt, “but I had an intuition that it would be a big deal, but I honestly thought that [Cathy] would probably lose.”

“Simply because to unseat Sophie Mirabella is a pretty mammoth task, Sophie in and of herself is a pretty tenacious campaigner and she can be very, very,” he pauses cautiously, “heavy-handed”. 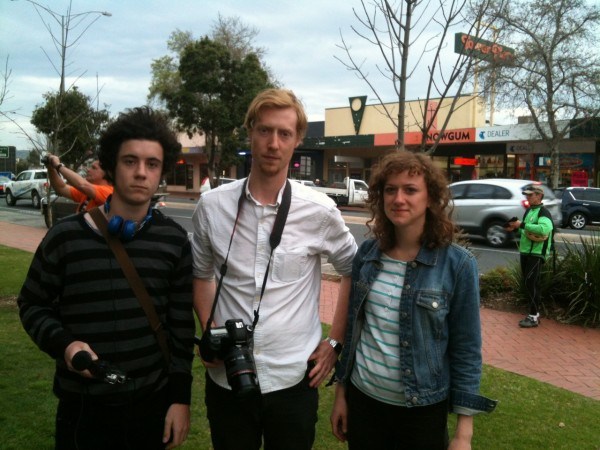 The filmmakers were told stories of outwardly Liberal voters who made anonymous cash donations to the McGowan campaign. “People didn’t want to appear publically for Cathy because they thought it might have a negative impact on them after the election, because nobody really thought Cathy would win.”

Sophie Mirabella has now officially conceded to McGowan; at the time of writing, there were about 600 votes not yet counted, but the chance of a Mirabella victory seemed negligible.

The doco team will stay in Indi to record victory celebrations, before heading back to Melbourne to start trawling through hours of footage. They are launching an online chip-in campaign to recoup expenses and hopefully employ a skilled editor to assist with post-production.

The projected release date for the doco is a minimum two months away and the team is still contemplating release options. Contribute to the doco’s chip-in here.