Something to sink your teeth into. 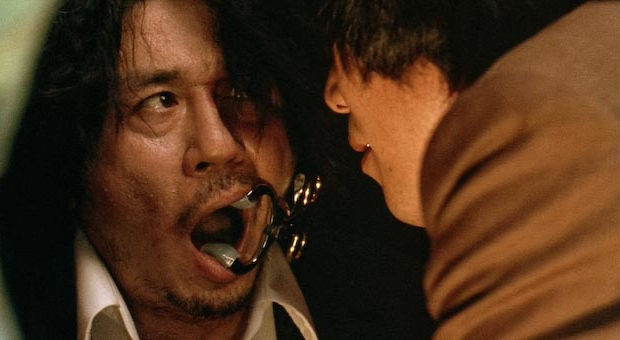 The throbbing. The pulsing. The pounding. The inability to concentrate on anything else in the world. We’ve all had one: an awful toothache, and no ability to get to the dentist for at least a couple days. Want to watch a movie to distract you from the pain? Well, in honor of the release of Kevin Smith’s Tusk – in which some rather unwanted things happen to an imprisoned captive involving the tooth-like protrusions mentioned in the title – here are seven (well, eight) other movies you should avoid under those circumstances:

No dentist? Just gotta get that tooth out? Have a Lamborghini available? Those ingredients come together in Jackass 3D, in which Jackasser Ehren McGhehey has a tooth (a totally healthy tooth, mind you) pulled with fishing line and a rapidly accelerating Lamborghini. As if it isn’t enough just to know that the tooth leaves his mouth at the point he starts screaming, a camera captures a close-up of the extraction in slow motion. Ouch.

Cinema has a history of crazy people who think their teeth contain the seeds of their downfall, and seek to remove them. If it’s not the crazy old hobo in 12 Monkeys who think he’s being tracked through his teeth (and removes about five of them), then it’s the crazy drifter (Michael Shannon) who tries to tell his new love interest (Ashley Judd) that he has bugs in his teeth in William Friedkin’s Bug. Friedkin holds the camera on Shannon while he takes a pair of pliers and pulls down with all his might, until the mouth is spurting blood and the offending tooth is in the sink.

While we’re on the topic of people “doing it themselves,” you won’t want to go anywhere near Yorgos Lanthimos’ Dogtooth while laid up with your agonizing incisor. This delightfully bizarre Greek film features an older couple who keep their grown children locked inside their home, fenced off from the rest of society, whilst concocting all sorts of myths about the outside world to scare them. When the eldest daughter (Aggeliki Papoulia) learns from one of these myths that they can leave the compound once they “lose a dogtooth,” she uses a barbell to smash her upper row of pearly whites. Especially disturbing is that it doesn’t look like this is faked.

If you’ve got one of those real doozies where you can’t even chew on the side of the mouth where it hurts, the last thing you want to see is a movie where people eat something that looks painful. We have a number of movies to choose from in this regard, but to lighten the mood from the previous few entries, the choice is the Jason Friedberg-Aaron Seltzer spoof movie Disaster Movie. Here, “the Enchanted Princess” (Nicole Parker) gleefully chomps on a beer bottle, taking jagged mouthfuls as the blood starts to flow and other characters look on in horror. Perhaps harder on the tongue than the teeth, but not great for either.

3 | Any Movie Where Steve Martin Plays a Dentist

For #3 we have a tie between Little Shop of Horrors (1986) and Novocaine (2001), as both movies feature Steve Martin doing questionable things with his license to practice dentistry. In Little Shop, he gets his own musical number (“Dentist!”), in which a manic Martin is seen twisting a young boy’s tooth with a pair of dental forceps, then drilling into an older gentleman immediately after injecting him with painkiller – meaning it hasn’t had the time to take effect. This second scene even features a POV shot from the patient’s throat, looking outward. In Novocaine, the fact that a corpse can be identified by its dental records comes to involve Martin’s dentist – and in a more personal way than you could ever imagine. Just stick to the banjo, Steve.

If you haven’t yet had your fill of teeth removed from mouths in unpleasant ways, there’s room for one more. This is the first on this list (but not the last) that actually qualifies as torture, as may be expected in the second of Park Chan-wook’s so-called Vengeance Trilogy. The vengeance seeker in this case is Oh Dae-su (Choi Min-sik), who emerges from a 15-year imprisonment and gets hold of a claw hammer. What does he do with this claw hammer, you ask? Oh, he just uses it to pry information out of someone – by separating his teeth from their gums. How many is uncertain, but we get to see one in gory detail.

No list of cinematic dental trauma would be complete without the granddaddy of teeth horror movies: John Schlesinger’s Marathon Man. It may be understated compared to some of those that followed, but the film also clearly paved the way for them. Strapping Dustin Hoffman to a chair and then obliquely, repeatedly, asking him “Is it safe?”, none other than Sir Laurence Olivier wreaks squirm-inducing havoc with just a few twists of a standard dental pick. That is, of course, before the drill comes out. The scene is brilliantly minimalist, but just the sound of that drill is all someone with an aching tooth needs to whimper for mercy.