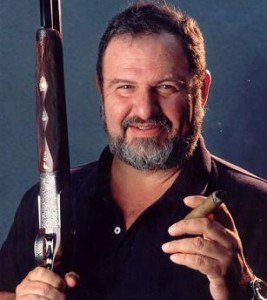 Milius himself once said “I’ve always been considered a nut. They kind of tolerate me. It’s certainly affected me. I’ve been blacklisted for a large part of my career because of my politics – as surely as any writer was blacklisted back in the 1950s. It’s just that my politics are from the other side, and Hollywood always veers left.” Whatever your own politics, this is a statement that takes sheer balls to make.

The natural contrarian and self-described Zen anarchist completely disregards the Hollywood machine that keeps people quiet in fear of losing their investors or their jobs. He has been an outspoken critic of studio executives and the embedded mechanics of the whole studio system. He is a former member of the Board of Directors of the NRA, being an avid gun collector and a renowned authority on firearms and military history. Following his own true North, Milius pursues projects that are close to his heart with people he respects. He is currently in talks with RZA of the Wu-Tang Clan, a filmmaker in his own right, to direct his script on the life of Genghis Khan.

An unsung hero of film, Steven Spielberg had this to say of Milius’ integral part in the New Hollywood: “John is our scoutmaster. He’s the one who will tell you to go on a trip and only take enough food, enough water for one day, and make you stay out longer than that. He’s the one who says, ‘Be a man. I don’t want to see any tears.’ He’s a terrific raconteur, a wonderful story teller. John has more life than all the rest of us put together.”

Dirty Harry, Dillinger, Magnum Force, Big Wednesday, Apocalypse Now, Conan the Barbarian, Red Dawn, Farewell to the King, Clear and Present Danger and Rome. Milius has served as either writer, director or both on all of these projects. As a screenwriter Milius is responsible for “I love the smell of napalm in the morning”, “Charlie don’t surf”, “Terminate, with extreme prejudice”, “Go ahead, make my day” and the “Do you feel lucky?” speech becoming staples of the pop culture zeitgeist.

A case of chronic asthma having kept him out of the Marine Corps and service in Vietnam, Milius became an expert on combat and military history. “It was totally demoralising,” he said “I missed going to my war. It probably caused me to be obsessed with war ever since.” This obsession with war led Milius to spend the rest of his creative life documenting the psychologies involved in combat.

From the brutal urban war zone of the Dirty Harry films, to Vietnam in Apocalypse Now, to the Cold War in Red Dawn and Clear and Present Danger (bringing dynamism toTom Clancy’s rather anaemic novel, his first draft featured an ending in which Cortez is killed in a mugging by drug addicts) or the sword and sorcery warfare of Conan the Barbarian, which brought Arnold Schwarzenegger to prominence in Hollywood.

3 | He was instrumental in the formation of the UFC.

Besides being an active surfer, Milius was an ardent fan of martial arts and a student of Rorion Gracie, of the world-famous Gracie family. Through Rorion, Milius met marketing executive Art Davie, who was interested in putting together a pay-per-view martial arts competition. Davie had been working with the Gracie family on a series of videos titled “Gracies in Action” which featured member of the family using Jiu-Jitsu to take on masters of other martial arts.

Milius came on board as creative director. Milius’ contribution to the nascent fighting competition was two-fold. On the one hand, the famous and respected director/screenwriter brought credibility and a name to the project, enticing investors. The first notice released to the public advertising the competition requested fighters to participate in a “War of the Worlds” event sponsored by John Milius of Red Dawn and Conan the Barbarian fame.

His second and arguably most significant contribution was the suggestion of holding the fights inside of a cage. To distinguish themselves from boxing and other martial arts competitions and to avoid fighters falling out of a square ring when action gets intense, Milius suggested having the fighters compete inside of an eight-sided steel cage and thus the UFC’s famous Octagon was born, now a trademark and symbol of the company.

4 | He is the inspiration for Walter Sobchak.

Who is Walter Sobchak? He’s a fucking veteran! He did not watch his buddies die face-down in the muck to be asked such things! The Big Lebowski is a 1998 dark comedy written and directed by the Coen Brothers. One of the most re-watchable films ever made, The Big Lebowski concerns an unemployed former-hippie and amateur bowler named The Dude, who gets roped into a complicated kidnapping plot after two men break into his house one night demanding money, one of them peeing on his beloved rug (it really tied the room together).

The Dude’s best friend is a man named Walter Sobchak, who the Coens based on their good friend John Milius. A security specialist by trade, Walter is a devout Jew (converted) and an ardent bowler. A slightly obsessed Vietnam War veteran, his short fuse leaves him prone to pulling a 9mm out on a bowling lane to settle a dispute over scores and destroying a Ferrari with a tire iron when he’s fucked in the ass by a brat (figuratively speaking).

But for all the bluster Walter has an unfaltering moral compass and in his barrel chest beats the heart of a good friend. He’ll protect you from murderous nihilists, operate a car on Shabbos just to drive you to Pasadena and he’ll even get you a toe by 3 o’clock this afternoon, with nail polish! He is the perfect counter point to the laid-back pacifism of the Dude, enhancing both that character and the film as a whole in ways no other character could.

Walter Sobchak is the Bret Hart of badass characters: the best there is, the best there was and the best there ever will be. Yes, you read that correctly, the real John Milius, writer behind Harry Callahan, Conan the Barbarian and Colonel Kurtz, inspired a character more badass than any of his own.