“If you get the opportunity…you should kill yourself.” – Det. Rustin Cohle

True Detective has become a monumentally frustrating television series to follow and I’m inclined to think that much of the fault lies with showrunner Nic Pizzolatto. Pizzolatto is without doubt one of the major figures behind True Detective‘s success and is a key contributor to the triumphant elements of the show, but as Season One gradually menaces toward a conclusion, the weaknesses of the HBO hit are becoming increasingly apparent. True Detective is a fantastic show, but it’s nonetheless been attracting sometimes unwarranted hyperbole without proper reflection.

The direction by Cary Fukunaga, the cinematography by Adam Arkapaw, Matthew McConaughey and Woody Harrelson as the two leads not to mention T-Bone Burnett’s remarkable score are some of the many incredible elements of True Detective, but the weak plotting is impossible to ignore. Elements are introduced and then largely ignored, such as Cohle’s hallucinations. Gripping ideas and characters, such as ‘The Tall Man’ and ‘The Yellow King’ seem like crime genre gold, but True Detective seems far more interested in spending time on Hart’s dull domestic issues. The vaguely anti-religious sentiments never gain enough traction to be truly compelling and are so formless it’s hard to care how they factor in to Dora Lang’s murder at all. These all might be minor complaints, but True Detective sets a certain bar by exhibiting such quality in other regards that when it’s weak, it’s limp.

The final moments of “Haunted Houses” suggest that much of the action in the last two episodes will play out in the most recent timeline in 2012. Will Cohle and Hart get on the hunt for The Yellow King once again? Unfortunately, by his own admission, Nic Pizzolatto isn’t as interested in the procedural elements of the crime genre as he is character development, and the truth of Dora Lang’s murder doesn’t feel nearly as compelling as it should. And on the character front, there doesn’t seem to be much left to reveal about the two lead detectives. Is True Detective running out of steam? 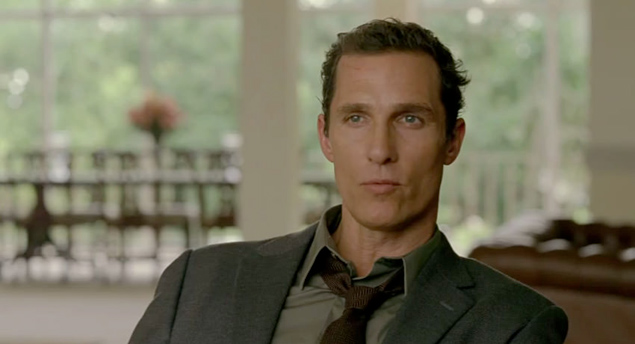 Both Hart and Cohle were remarkably characterless in this week’s episode, which retread a lot of old ground with both men. We finally found out the reason as to Hart and Maggie’s divorce, which was, unsurprisingly, Hart’s infidelity. There’s a nastiness to the way True Detective views women, highlighted more so in “Haunted Houses” after the customarily morally righteous Maggie uses Cohle’s feelings for her to destroy her own marriage. The way in which women are portrayed in True Detective, as degenerates, prostitutes or badgers, is arguably intentional. It certainly emphases the general view of women that the men who populate Pizzolatto’s Louisiana have and the spiteful way in which they can impose themselves over the fairer sex. But despite Cohle’s grim views toward the world (“fuck this world”), it’s Hart that seems to have more in common with the monsters he’s chasing, treating women with little empathy and lashing out violently at anybody who crosses him.

Cohle is investigating everything and everyone, and is finally led back to the Reverend Billy Lee Tuttle, cousin to the Louisiana Governor. We met Tuddle back in the very first episode and have not seen him since, despite his name cropping up often enough during the Dora Lang case to be suspicious. By 2012, we know, Tuttle is dead from ‘mixed medications.’ It seems more than likely that Tuttle is somehow involved in some form of murderous cult that was responsible for Lang’s death, amongst other murders. It also seems probable that the deceased Reggie Ledoux was also part of this cult, as are The Tall Man and The Yellow King. Tuttle himself may be one of these mysterious figures. He was wearing a yellow tie and handkerchief during his conversation with Cohle, although that may be obsessing over details.

One key question that remains unanswered is what Cohle has been up to since the deterioration of his relationship with Hart. Is he to blame for the mysterious death of Tuttle? Is he responsible for even worse, as Det. Gilbough and Det. Papania evidently believe? With two episodes to go, Pizzolatto has a lot of work to do to conjure up some satisfying answers.