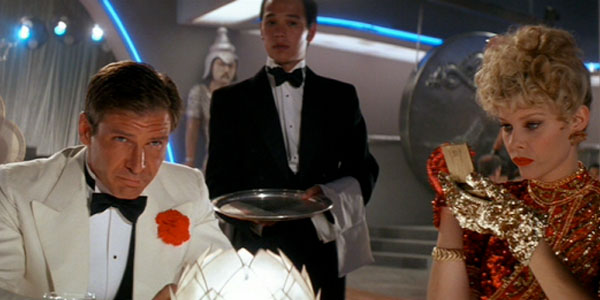 Synopsis: After crash landing in a desolate area of India, Indiana Jones is convinced by locals to investigate the mysterious rumours surrounding Pankot Palace.

In some ways, Indiana Jones and the Temple of Doom is like an otherwise fantastic person who is perpetually and unfairly judged by everybody on their regrettable tendency to become obnoxious when drunk. It’s a small facet of their personality and yet it’s a dominant factor when it comes to making good or bad impressions. This essentially decent person may be generous, kind, funny and whatnot and yet they’re rejected by society because all everybody ever seems to remember is the bit where the guy rips a heart out of a man’s chest and forces young children into slave labour in an underground lair.

Consider the following – Raiders of the Lost Ark is perhaps the least imperfect film in the series, while Temple of Doom is the most bold and The Last Crusade is a cowardly, albeit entertaining, rehash of the first film (with additional Sean Connery). But the strengths of Temple of Doom don’t resemble those of the other films in any shape or form, which is perhaps the underlying factor regarding its general rejection. The key to Temple of Doom is its surreal ambition. Steven Spielberg, a filmmaker generally in favour of playing things safe, has rarely demonstrated such creative drive as he does in Temple. The character of Indiana Jones was actually heavily based on Spielberg’s love for James Bond, who is famously thrust into wildly varying situations and locations in every film. Temple of Doom distinguishes itself in terms of narrative and imagination, something that The Last Crusade never really does. Some of the perceived weaknesses of the film really just come down to their dissimilarity to comparable elements in Raiders. Willie is annoying, but she’s meant to be annoying – the antithesis of Marion Ravenwood.

The musical opening, the discussion in the Shanghai nightclub, the plane crash, the trek through the Indian jungle, the mine-cart chase and the standoff on the rope bridge are but a few example of scenes in which Doom not only matches but in some case surpasses anything in terms of spectacle that the other two films have to offer. Sure the whole child slavery/heart ripping stuff is pretty off, but that all occupies under twenty minutes of the film’s nearly two-hour running time.

“HOTTEST CHICK, MOST ACTION, BEST SIDEKICK OF ALL TIME, NON STOP THRILLS. IF YOU’RE ONE OF THOSE DICKS WHO COMICALLY SAYS “HAHA TEMPLE OF DOOM IS THE WORST OF THE TRILOGY, FART FART I’M COOL RIGHT?” THEN WHATEVER, YOU’RE JUST A D***. BUT IF YOU GENUINELY DISLIKE TEMPLE OF DOOM AND THINK IT’S A LEGITIMATELY BAD MOVIE… WELL, I HOPE YOU GET CANCER TOMORROW. IN YOUR EYEBALLS. SO YOU CAN NEVER WATCH A MOVIE FOR THE REST OF YOUR LIFE, AND THUSLY YOU NEVER GIVE YOUR SH**TY OPINION ON MOVIES EVER AGAIN. YOU CARR HIM DOCTAL JONES, DORRRRRRRRRRRRRR.” – Random Blogger opinion that we stumbled across

Sadly enough, Steven Spielberg remains blind to the success of the film, stating in a recent-ish interview that “Temple of Doom is my least favorite of the trilogy. I look back and I say, ‘Well the greatest thing that I got out of that was I met Kate Capshaw. We married years later and that to me was the reason I was fated to make Temple of Doom.” He essentially remade Raiders with The Last Crusade, and with Kingdom of the Crystal Skulls proved conclusively that sticking to a formula does not equal success. Spielberg has remained largely indisposed to genuinely pushing himself creatively ever since Temple of Doom was met with harsh criticism and declined to be interviewed by ReelGood regarding the atrocities of Crystal Skulls.