“Contract or no, I will not bow to any sponsor.” 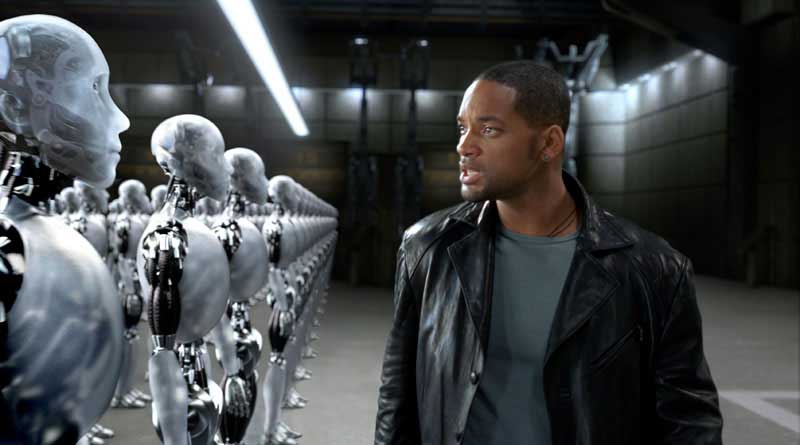 We’re used to seeing the flash of a car manufacturer here or a mobile phone there, but in movie history there have been times where a film has momentarily become an advert. Sure, the movies need to get those humongous budgets from somewhere – but does it really have to be so obvious? Here is a countdown of the Top 20 most blatant of these moments, starting with those that maybe couldn’t be avoided, and ending with those that are utterly shameful.

So you’re going on a journey to Mars. The trip is going to take FOREVER to get there. What do you pack? Astronaut suit, a good book… Oh yeah, and M&MS. Wait, what?! In this scene, the confectionary pebbles are used to form a beautiful DNA double-helix. Presumably this is to make us think of M&Ms as essential to life. Or something.

Jon Favreau worked up from writing Swingers to directing Iron Man and losing love for the movie craft along the way. Chef was meant to be a return to his indie roots, but he brought along some Blockbuster sensibilities for the ride. The product placement for Twitter saturates the whole plot so it’s nearly necessary, but additional bells and whistles were avoidable; characters tweet often and when they do so the audience is greeted with a little icon of a bird flying away and a tweet sound.

With Myspace’s previous owners selling the graveyard social networking website in 2011, one year after the release of Kick-Ass, it goes without saying that the brand’s barrage of the movie’s plot didn’t really work out – pretty shameful considering its success. Prosperous company or not, it doesn’t stop the use of Kick-Ass’ Myspace page to propel the storyline being an incredibly blatant case of product placement.

To be fair, the character of Walter Mitty is so introvert and awkward that the only way this story was going to work was through the use of an online dating website. One was definitely required, but the scale in which e-Harmony is advertised is incredible, as well as the fact that it does indeed hold the key to Walter’s true love…

BMW paid $3 million to dump their Z3 Roadster in the 1995 James Bond blockbuster. The German brand saw $240 million in advance sales alone due to the movie, proving that it pays to be Bond’s car of choice, even if it is only Pierce Brosnan…

Tom Hanks’ stranded character finds his best friend and the saviour of his sanity, a soccer ball he calls Wilson, inside a FedEx box. There is also significance in how these Fed Ex boxes have survived such a torrid storm, while neither the other humans nor a plane wreckage has. Furthermore, one of the movie’s closing moments involves Hanks finally delivering one of the FedEx boxes to its rightful place. Interestingly, FedEx paid nothing for the product placement in the film. So this was all voluntary?!

While the remarkable fact remains that Apple never pay for their products to be used in TV or Movies, they know it helps matters massively when they’re willing to give out unlimited products to any big production that wants to have them featured. The Mission: Impossible series has taken these freebies to the limit, featuring Apple extensively across all four instalments. Do secret agents really do all their spying and gadgetry on Macs and iPads? Apparently.

Bond is no stranger to a top-quality brand – the history of its franchise has been a breeding ground for product-placement. In Daniel Craig’s third outing as 007 he finds himself drinking Heineken very obviously, in a beach hut, being embraced by a beautiful woman. Sorry – has the movie started yet, or?

Okay, okay, so Tom Hanks’ Viktor Navorski is stuck in an airport terminal – there has to be a certain level of product placement so he isn’t walking amongst blank shops and food outlets. What the movie didn’t need, however, is for an entire sequence to be devoted to Viktor earning and saving tiny amounts of money, only to blow it on one whopper burger. Burger King is cheap! Burger King is tasty! Burger King is of the highest priority when you are poor! Thanks, Spielberg, for this little advert in the middle of your movie.

Hey – young audience! Reese’s Pieces are that tasty that even your favourite extra terrestrials love them! The manufacturer Hershey’s saw profits rise by 65% following the release of the film. Not too shabby.

This exchange of classic movie dialogue is often overlooked in discussions of product placement as it’s just so damn snappy. But we must not forget the caveat of the conversation, slipped in there at the end by Quentin Tarintino or maybe even by Ronald McDonald himself. In the scene, two super cool hit-men discuss French names for popular Burgers. Well, one popular burger – the other is just…not fit for cool people. “A Royale with cheese. What do they call a Big Mac?” Vincent: “Well, a Big Mac’s a Big Mac, but they call it Le Big-Mac.” Jules: “Le Big-Mac. Ha ha ha ha. What do they call a Whopper?” Vincent: “I dunno, I didn’t go into Burger King.”

Toy Story has surprisingly little product placement considering it is all about toys. Presumably they could have filled the entire movie with products from real life. The most prominent still remains, however, with a living Etch-A-Sketch being used effectively as a slideshow merchant during empowering speeches by Woody…

The cutest, most adorable piece of hardware in movie history didn’t need to have a manufacturer we currently know of, considering it is set far in the apocalyptic future. For some reason, however, Pixar decided to make Wall-E a development of Apple’s Macintosh computers. Multiple times in the movie Wall-E restarts or recharges using the Mac start-up sound – unnecessary…and therefore shameful.

What do you do just before you are about to save the world from Zombie decimation? You drink a Pepsi, of course, and follow your gulp with an advert-worthy ‘Ahh’ for good measure.

Completing our Bond triad is an absolute stinker. It seems that 007 is a lucrative man upon which to hang your products… In this iconic train scene Bond verbally jousts with his future love Vesper. As Vesper attempts to figure Bond out, she comments on his ‘expensive watch’.

As Nicky’s first experience of eating, he seems to think Popeye’s Chicken is a pretty good one. This is essentially a 40 second advert within a movie.

When you think of how movies seem to get money from subtly inserting products so often, it appears more and more ludicrous how obviously Will Smith advertises Converse All-Stars in I Robot. At one point gazing upon them and stating they are a ‘thing of beauty’, he then goes on to repeat the entire product name to his mother. Help! Help! I’ve paid to watch a commercial!

It’s hard to decide whether this example is completely unforgivable or completely acceptable due to just how conspicuous it really is. Rising Golf sensation Happy Gilmore rakes in the money in the movie by advertising Subway, a product he clearly has a passion for personally. So it must be nice, then.

I’m not saying Sofia Coppola wrote this scene in order to advertise Suntory Whiskey, but would it really have been that hard to just make a brand up? The amount of times the whiskey is mentioned in this scene alone, never mind the film in general, is staggering. The scene is Bill Murray filming a Suntory commercial for heaven’s sake! According to Suntory’s marketing department the product placement ‘gave the whiskey brand international recognition.’ No kidding.

You can’t get much worse than an entire movie being funded by one giant brand. Shane Meadows had gained huge praise for his movies Dead Man’s Shoes and This is England before creating this 71 minute advert for the famous Britain to France rail network. Worst of all, the movie is in black and white until they board a Eurostar train.