Sun and surf. Without the sun. 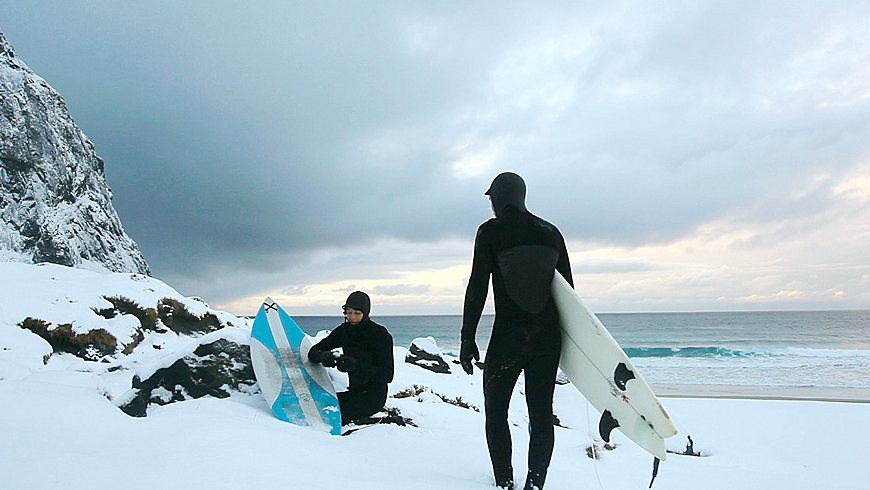 “Inge Wegge and Jørn Ranum spend nine months in the isolated and uninhabited bay of a remote, arctic island on the coast of northern Norway, facing nothing but the vast Atlantic Ocean. There they build a cabin out of driftwood and other cast-off materials and spend their days surfing some of the best waves on the planet.

On this epic arctic adventure, after discovering the beach is a catchment for the world’s plastic waste, these young men find a way to give back to nature. They spend hours collecting tonnes of rubbish washed up on shore to restore this remote wilderness to its pristine state.”

There’s a beautiful simplicity to the way in which Inge Wegge and Jørn Ranum isolate themselves at a beach north of the Arctic Circle for nine months. Their story recalls old adventure tales that made hardship during travel somehow incredibly appealing. Their lives on the coast never seem like a victory over the challenges that nature put to them. Rather it is a circumstance of mutual harmony. Luck and aptitude play equally important parts in Wegge and Ranum’s survival. They seem to uncover an extraordinary amount of material to build their hut – extraordinary to the point that it seems as though it all could have been deliberately left there for them, even though it wasn’t.

North of the Sun inspires at once envy as well as the urge to emulate Wegge and Ranum’s courage, disposition and competence. The surfing, snowboarding and paragliding that galvanised their trip immediately becomes secondary to the enormous beauty of their situation and the inventiveness of their survival. A makeshift hut in the raging Norwegian winter may never again seem so appealing.

The footage that Wegge and Ranum have managed to capture is mesmerising, thanks perhaps in no small part to the fact that the two became friends while in film school. There’s a conscientiousness in them when it comes to responsible filmmaking, so we’re always allowed the full picture of proceedings, something that must have been fairly time consuming for both of them. There are very few moments in which the composition of a shot has not been applied at least a small amount of thought. It’s a reasonably insignificant element in terms of why the film is so successful, but the fact that North of the Sun does not look like The Blair Witch Project is very welcome.

The film isn’t only for surf enthusiasts. In fact, it’s not particularly for surf enthusiasts at all. Wegge and Ranum’s adventure almost evokes the most mesmerising elements of Christopher McCandless’ journey, most notably chronicled in the Jon Krakauer novel Into the Wild. Like McCandless, these Norwegians yearned for a simpler life, without the weight of modern society. Crucially though, Wegge and Ranum never embarked on their journey as a rejection of that society.