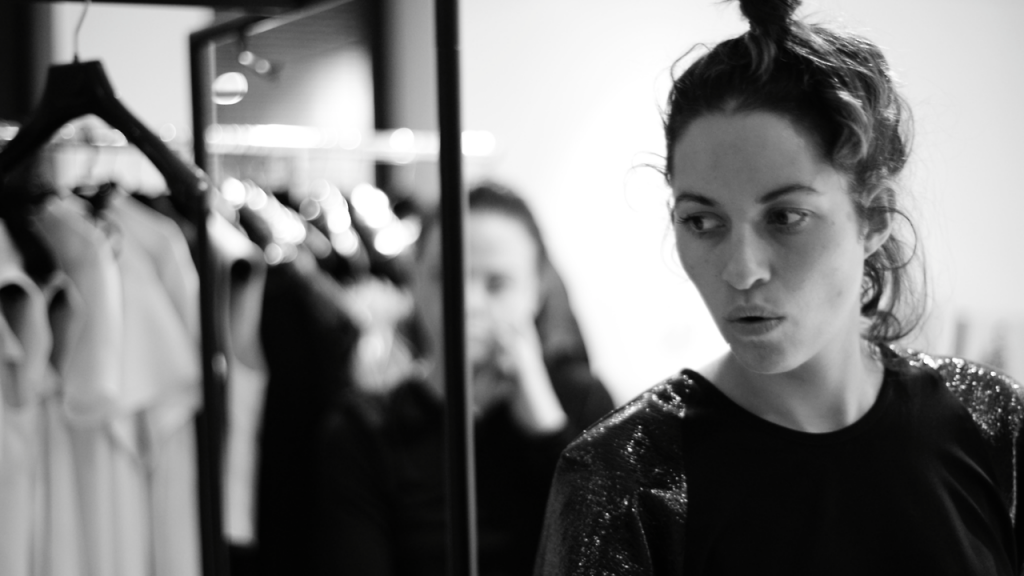 Premiere: Ellery in Paris, by Patrick Pearson, is a beautiful black and white film which records the remarkable journey of Kym Ellery’s debut showcase as the third Australian designer in twenty years to be invited to Paris Fashion Week. Pearson has a magnificent ability to depict emotion through his used of imagery, dialogue, music and text. Paris in black and white seems only natural, in a strange way there isn’t any meaningful absence of colour when depicting Ellery’s garments and prints. We spoke to Kym and Patrick about their creative experience.

What do you think makes a great fashion film?

K:  The journey. Whatever that may be, a short or long journey. I love watching documentaries and learning about someone and the path they have taken.

P:  Honesty and realistic portrayal, with an emphasis on the human subject matter, whatever they put into their designs and whatever elements of their industry they are apart of.

How was your working relationship with another?

P:  Kymbo, you were the one with the camera in your face the whole time, Amazing! A real dream and just so easy and trusting, the film would not have been anything like it is without Kym’s trust and patience to have me following her around with a camera 3-feet from her the entire way! It was just so inspiring to see someone achieve such amazing success in such an intimate environment, I think that was just a real added bonus for me, to be there and see it happen and watch Kym, a young and blooming artist, work so hard at something and to see it become reality. I actually only met Kym once or twice before filming her arrival at the airport, so for her to just relax and be so natural in front of the camera would be a dream scenario for any filmmaker. She is very exciting and sporadic, Kym makes for amazing and unique company, and she keeps you on your toes so you had better be ready for action – with or without a camera in your hand. We started off as collaborators and ended up as good friends so it couldn’t have been better!

K: Fantastic. I have so much respect for Patrick as a creative and as a professional and it was such a pleasure spending time together while working on the film.

Patrick you have been experimenting with black and white film recently, is this film an extension of your experimentation?

P: This film is certainly an extension of my experimentation with B&W, specifically I’m interested in how I can achieve a B&W grade as to allow audiences to interpret the film in a specific way without the added distraction of colour. For this film specifically, I wanted to use B&W to allow the audience to focus on Kym as a Human Interest piece. To allow the audience to focus on all the macro elements that makes up a personality, such as facial expressions, mannerisms and human articulations etc. I’m just a big believer that B&W provides a greater amount of clarity when it comes to a human subject that colour just will not match, I believe it provides the audience a greater emotional connection to the subject matter. The film for film evolved organically and certainly the narrative was not planned. We were not sure what was to be the main focal point rather than chronicling the lead up to the show, Kym’s raw, refreshing and down-to-earth personality was the highlight for us as a crew during production, I think shooting and grading the film in B&W provided the audience with even greater clarity of Kym.

The artist Ben Baretto was of great influence to your collection in way of colours, print and weaving technique. How did these elements translate to black and white?

P: I think this film isn’t solely about the clothes or collection, it’s about the journey and lead up, so those who were into the fashion side would look up the collection online once they have seen the film.  In the way of prints and details I think there is a great textural and tonal variation when colour is removed. The garments seem very dramatic and the focus is more so on how the pieces are worn and move.

Many designers are inspired by past eras, for example 70s flares, however seem to mimic the horrible elements. You have that ability to create effortlessly stunning forms that outshine those of the past. What predominantly influences you?

K: The past really influences me I like reinventing and modernise silhouettes for women to wear today. I look more at the silhouettes I can create and working with fabrics that have a good memory so they hold the shape and silhouette through the cut and the make of the garment, it’s more about that for me. 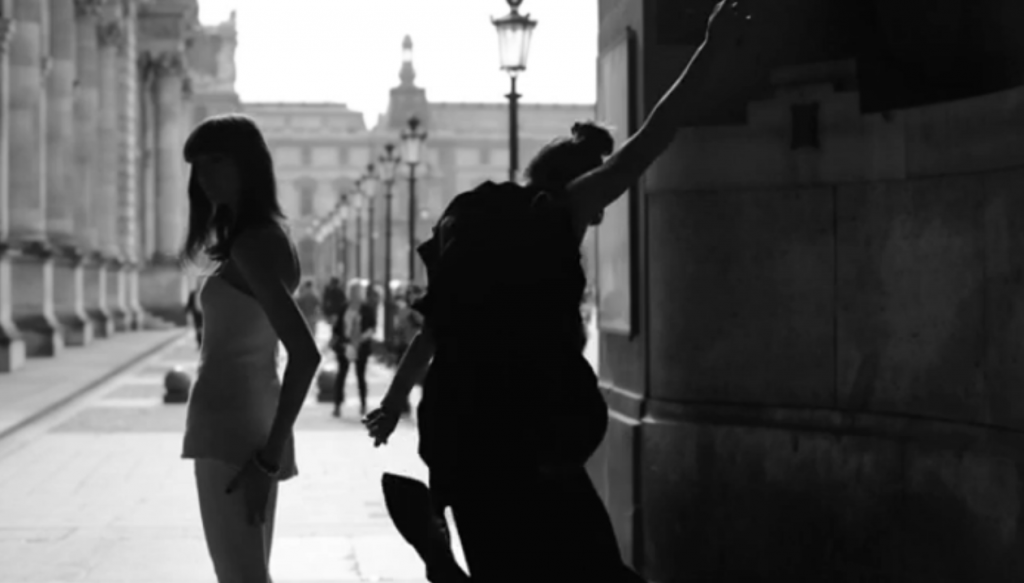 How do you use your influences and still create collections that reflect yourself?

K: I was saying earlier to Patrick, I think what was really intimidating about this “Premiere” show was to determine what our handwriting and DNA is as a brand and trying to convey and communicate this to an international audience who would be seeing the brand for the first time. To try and come up with what that was quite a hard process. I was constantly questioning what I was doing and having to really think about it because I wanted to deliver a moment that people could see and immediately understand our handwriting.

Patrick did you think this translated the way Kym wanted it to, as she just explained?

P: Yeah I think so, when I sent her the film I was in Paris, I sent her a link of the finished product. She wrote back to me, I’m not sure what time it was in Australia, I think 2 or 3am she was crying with tears of joy. So that made me really happy, there’s no better audience that you want to impress than the person you have just filmed and it’s very humbling when they have enjoyed the film even when it’s about them.

I think that is really does, it shows the amazing designs, artistic exploration and all that work that goes on behind the scenes, it’s a very honest portrayal and she was very trusting. Yeah I think it portrays Kym and the collection as she probably hoped. She was always asking me if it was raw and honest and I think it certainly was.

Do you feel there are demands for highly trend-focused collections?

K: Yeah I mean those companies are at the bottom of the food chain when it comes to fashion and I think people want to look to what happens in Paris, Milan and very much London, as well, for what designer will produce and what will be common threads to create those trends and obviously Topshop and Asos are the very commercial companies who translate that, and water it down.

I love that scene in The Devil Wears Prada when Anne Hathaway walks in and mocks the periwinkle blue, or whatever its called, and Meryl Streep cuts her down and says, ‘you know what girlfriend. that jumper you’re wearing was the colour from the runway of this show, on that year and you think you’re exempt from the rules of the fashion world, well guess what you’re not.’ You’re wearing something that I picked chose in this room a few years ago. I think the fashion world is very much like this, that is such a true representation of the industry and the cycle of trends, it’s the way it works in the food chain, so to speak.

There is the reality of stress in the lead up to Fashion Week however you seemed to have an alluring ability to stay calm, throughout the film you seem composed and under control, is this an accurate portrayal?

K: Well for me I think I was just honoured to be there and Patrick’s presence certainly kept me calm, but I actually had been sued by Myer six months earlier and had was in a heavy litigation at the Supreme Court in Melbourne that dragged over ten or eleven days so after that experience I must say I had a completely new perspective on what was worth getting stressed about and what wasn’t, so, it really helped me stay calm in the process, despite the lack of sleep and I think just the support and commitment I had from the team around me and the absolute experts I had as part of the team, and hair and makeup team, there was no need to stress or worry and yeah!

That’s sort of my vibe now anyway. There were definitely times when you panic and stress but it’s usually when its something you can’t control. My philosophy is there’s no point worrying about it because it is completely out of your control. On top of that I had just started meditating as well so I think that was really helping me in the process.

Did you feel any added pressure with Patrick’s camera presence?

K: Ah not really, it took some time getting used to, but after a few hours it felt fine and normal. I knew he was there to capture what we were doing, so I just focused on our tasks.

Premiere: Ellery In Paris will be featured at ACMI as part of Fashion on Film from the 30th of August – 7th of September. If you’re digging ReelGood, sign up to our mailing list for exclusive content, early reviews and chances to win big!