A highlight of JIFF. 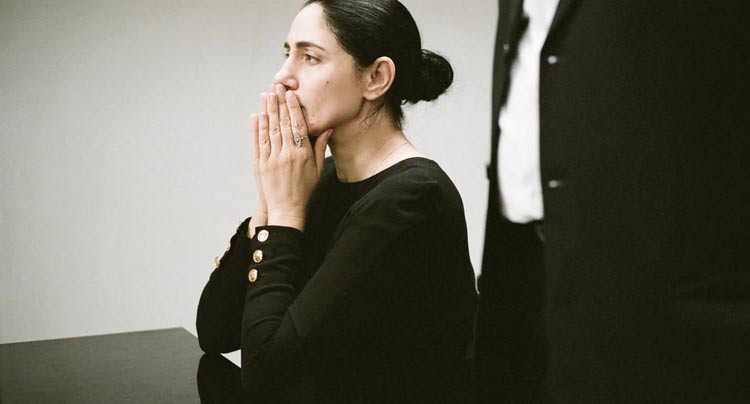 “Winner of Best Film at the Jerusalem Film Festival, 2014, screened in Directors fortnight in Cannes 2014 to critical acclaim and nominated for 12 Ophir Awards (Israeli Oscars). Gett is a contemporary exploration of divorce and long-term relationships punctuated by lighter moments. It is also a rare insight into the rabbinical court and its treatment of women. Viviane is refused a gett; a Jewish divorce which can only be given by a court of rabbinical judges and with the consent of her husband. The exhausting and absurd protocols Viviane is forced to endure, and the anguish caused by not being able to start a new life, does not stop her.”

The characters of Viviane (Ronit Elkabetz) and Elisha (Simon Abkarian), the two central characters of Ronit and Schlomi Elkabetz’s Gett, the Trial of Viviane Amsalem, have appeared twice before, in To Take a Wife and The Seven Days (both also directed by the Elkabetzs). In To Take A Wife, Vivianne wanted to leave her soulless but longstanding marriage. In The Seven Days the characters were separated, but Elisha’s claustrophobic influenced on Vivianne remained nonetheless. Gett, the Trial of Vivianne Amsalem focuses on Vivianne’s five-year-long appeal for a divorce, which, under the jurisdiction of the Orthodox rabbinical courts, can only be granted at the husband’s acquiescence.

Each of the films has enjoyed its own distinct style. Gett embraces a visual richness that evokes the intimate nature of theatre performance, which is enhanced by the theatrical nature of the courtroom setting. The tightness of each shot suggests that they could be from the point of view of another character, giving the drama an alarming sense of immediacy. It’s not hasty filmmaking – it takes minutes before we even see Vivianne, or many of the other characters, despite the fact that they’re present from the get go.

It’s a fantastically scripted and acted film, allowing for as many wordy outbursts as lulls in the action. Both are powerful, thanks in particular to Elkabetz’ central performance as Viviane. Also crucial is Menashe Noy in the role of Viviane’s lawyer Carmel Ben Tavin. Incompatibility, we learn from the outset, just isn’t a substantial enough reason for divorce, and so Carmel ventures to find some legal cause for the court to grant Vivianne’s freedom from her loveless marriage.

There’s something apt about the suffocating nature of the courtroom setting in regards to Viviane’s own plight. The stripped down nature of Gett may not appeal to some, but there’s a focus on dialogue and performance, which the bare visual style allows, that generates a powerful sense of drama to proceedings.