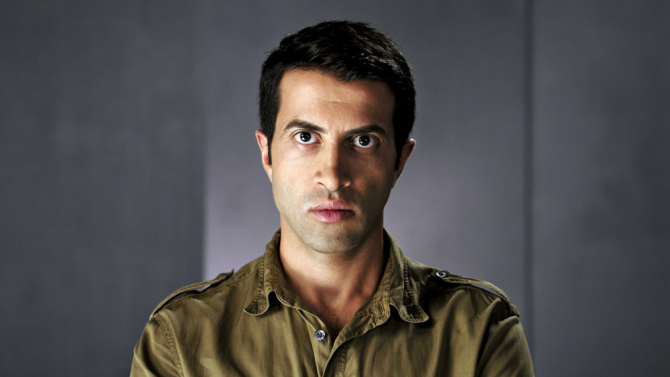 “This is a gripping account of terror and betrayal, based on the New York Times best-selling book, Son of Hamas, a memoir by Mosab Hassan Yousef.

Yousef, a Palestinian from Ramallah, grows up ready to fight Israel. He is arrested for smuggling guns at 17, interrogated by Israel’s security service, and sent to prison. While there he is turned, and he agrees to spy for Israel. For him, there is no greater shame. For his Shin Bet handler, there is no greater prize: operating the oldest son of a founding member of Hamas. The Green Prince is less about political struggle, though, than it is about the personal toll that these men’s moral choices have on them, and the relationship between “source” and “handler” – adversaries who cannot help but be emotionally tied to each other.”

A degree of objectivity has been sacrificed for the sake of a thriller-esque narrative in Nadav Schirman’s The Green Prince. But then, truth in documentary has been a hazy area of cinema since as far back as Robert J. Flaherty’s Nanook of the North. The Green Prince, playing at this year’s Jewish International Film Festival, feels like an espionage thriller, like something straight out of a John le Carré novel. It tells the true story of Mosab Hassan Yousef, the son of one of the leading members of Palestinian organisation Hamas.

The film explores the 10-plus years that Yousef spent working as a spy for the Israeli internal security service, Shin Bet. Alternating between interviews and recollections of Yousef, code-name Green Prince, and his Israeli mentor and handler, Gonen ben Yitzhak, the film is naturally low on archival footage, a result of the stealthy nature of Yousef’s story. In lieu of such material, Schirman uses re-enactments of events that sometimes supports the information and sometimes distracts from Yousef and ben Yitzhak’s words.

Rather than concerning himself with the bigger picture of the conflict between Israel and Palestine, Schirman instead invests himself in the evolving relationship between Yousef and ben Yitzhak and the astonishing risks they took as part of that relationship. The Green Prince does have a tendency to raise more questions than it answers. For all his charisma and charm, Yousef never really attempts to explain just why he acted the way he did. What made the son of a prominent Hamas leader work for Israel as a spy? We may never know. But for the most part, The Green Prince is a gripping tale, that often feels more sensational than any work of fiction.