It’s not all about the feature films at MIFF – the film festival is also an opportunity for filmmakers to showcase short films and short documentaries that are too often under-recognised as an art form. I’ve always had a soft spot for animated films, so I decided to check out a screening of animated shorts, showcasing a wide range of animation styles from all around the world.  The films on display were chosen by a panel including Isabelle Peppard (director of the short animation Butterflies), and most are in competition for the Shorts Awards on Sunday (for which you can purchase tickets on the MIFF site).

Right off the bat was a young filmmaker from Melbourne. The Wolf, the Demon and the Moon was Leanne Lee’s graduation piece. A wolf must protect her cubs against the dark spirits of the night. Leanne was in attendance at the screening, and told us that she hoped it would give us a sense of myth and folklore that inspired her. Well, it did all that and more. The animation style itself felt very delicate and looked beautiful, and the film itself took you on quite the emotional journey. A strong start to the night.

Possessions was next, and was directed by Shuhei Morita from Japan.  It is based on a concept from Japanese folklore, in which objects after over a century of use ‘come to life’. A man traveling through the forest decides to shelter from a storm in an abandoned house. He can’t leave until he fixes a number of broken objects, all of which have developed souls. The animation style does carry the distinctive Japanese ‘anime’ style, but is also carries a unique artistic style within that. The film begins quite dark and creepy, but quickly turns to a more light-hearted, almost comedic style. There were some wacky, crazy moments that were slightly reminiscent to me of Satoshi Kon’s Paprika. It was very entertaining overall.

The next film, Requiem for Romance, would get my vote for the most visually stunning film of the night. Jonathan Ng, who was also in attendance that night from Canada, animated this frame by frame using Chinese watercolour backdrops, and the result was an incredibly beautiful film. We listen to a young couple break up over the phone, their conversation echoed through an animated martial arts battle. It was a bittersweet film.

Echo was next. This hand-drawn, black and white animation from Germany looked interesting, but this was my least favourite film of the night. It is described as a ‘visual echo’ and most definitely has a surreal quality to it, but I’m not a huge fan of the surreal. If there was some kind of metaphor it escaped me. If you like your films weird (and I mean weird) then you’ll probably like this, but it was a bit too weird for me! 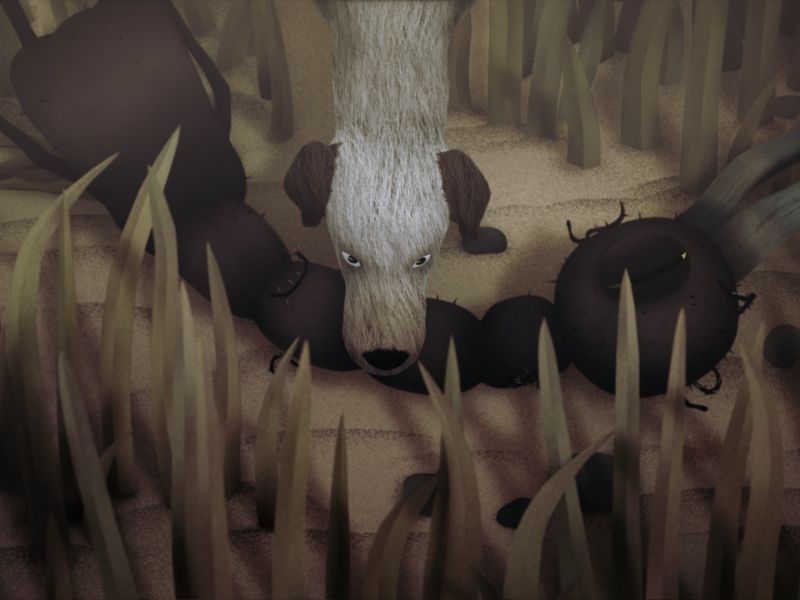 Like Rabbits (Sticky Ends), an animation by Osman Cerfon from France, was up next. Wow – sometimes it’s easy to forget that animation can be just as seedy as any live-action film! A group of people visits a fair ground, but bad luck spreads (and everyone has a thing for rabbits). There is some very dark humour that brought about a lot of laugh out loud moments, and the animation has a kind of dingy, dirty feel to it that was an interesting change from the usual clean, pretty animation we’re so used to seeing. It definitely made me sit up and take notice, that’s for sure!

Darling, by Izabela Plucinska, was an effort from Germany/Poland and was one of the most visually striking things I’ve seen. I’m not even sure how to describe the animation style – stop motion? Claymation? We see the story from the point of view of a woman, who wakes up to see a strange man in her room who claims to be her husband. She has no memory of him. As we go on, we come to realise that she really has lost her memory, and is suffering some kind of mental illness. This piece was sad, sensitive, but quite touching.

Us (Ulrich Totier) was hilarious. There is no other word for it. A rock lands in an otherwise empty landscape, and it affects the strange inhabitants in unexpected ways. The action escalates to the grand finale! Laughter is catching, and the whole cinema was laughing non-stop. I could watch this one again and again.

Irish Folk Furniture won the Best Short Animation award at Sundance. It was definitely a nice, pleasant watch, using hundreds of photographs to create a stop motion animation. I didn’t find anything spectacular about it story wise, but definitely interesting to watch and to listen to, as a number of farmers are interviewed about their old discarded furniture, which is then restored.

Palmipedarium reminded me of a picture book I used to read as a child called ‘Florian and Tractor Max’ The book and the film aren’t related in any way except for similar dark, bleak visual styles. It felt like a painting. The son of a duck hunter must decided whether to turn in or set free a strange, bird creature he finds on the farm. I found it very engaging.

The final film of the night was Boles (Spela Cadez) and I would recommend this to anyone who has ever suffered from a case of writer’s block. Filip can’t seem to write a single thing, except when his colourful neighbour asks him to help write her a letter to her fiancé. The stop-motion is superb, and the ending was something I did not expect. It was a wonderful way to finish the evening.

I look forward to seeing who will be awarded top prize on Sunday!