“Every man, woman and child lives under a nuclear sword of Damocles, hanging by the slenderest of threads.” JFK’s cautionary words from 1961 are the first we hear in Fallout. It was a period of moral uncertainty. Social dynamics were starting to reveal loose threads; Communists were probably hiding in your morning coffee. This is the backdrop in front of which Fallout unfolds.

The Australian documentary tells the story of Nevil Shute’s On The Beach, a prescient 1957 novel, penned in the wake of the nuclear devastation of Hiroshima and Nagasaki. Shute warns of the (what then seemed caustically real) possibility of a post-apocalyptic world. In 1959, Stanley Kramer adopted the story, recruited Ava Gardner, Gregory Peck and Fred Astaire and filmed an adaptation in Melbourne (which proved, according to Gardner’s infamously backhanded quip–the perfect place to shoot a movie about the end of the world).

Fallout offers some fascinating historical details (the vision of Aboriginal tribes camping in the desert indentations caused by British nuclear tests; the fact Churchill read, and respected, the novel). But the narrative lens has been drawn a little too long and the doco buckles under the weight of trying to tell too many stories simultaneously. 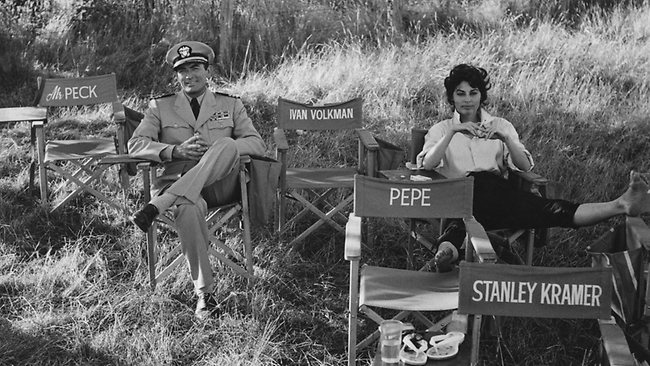 The film is essentially told in three acts. First, we are offered a biographical sketch of Shute: his wartime upbringing in Britain; his days spent working as an engineer, moonlighting as an adventure novelist. Fallout only grants us a rather thinly drawn portrait of Shute, told mainly via anecdotes from his daughter. In the Q&A following the screening of Fallout at MIFF, director Lawrence Johnston explained that despite tireless searching, there was no archival footage of Nevil Shute available. This, it seems, is partly due to the nature of the times, and partly because Shute was a stubbornly private man, in typical enigmatic novelist fashion.

Focus then turns to Shute’s writing of On the Beach. This coincided with relocation from Britain to the hot and slightly barren streets of Melbourne. The third act centres on Stanley Kramer’s adoption of the novel and direction of On the Beach, the movie. (Shute was reportedly apoplectic at Kramer’s handling of his material, so much so it induced a fatal stroke). A brief and slightly-rushed prologue is also added: a meditation on the nature of nuclear war and the contemporary atomic situation. That is, dulled, but not non-existent.

Because these separate acts seem so clearly apparent, the inclusion of chapter headings would not have been unwelcome; such delineation may have perhaps aided the pacing of the film.

The main flaw of Fallout, lies with who is chosen to tell the story. Only seven interview subjects are presented. These are mainly academics and writers, who focus on Shute’s work specifically or larger themes such as the nuclear atrocities of Hiroshima. Three subjects are able to offer first-hand accounts, Shute’s daughter, Stanley Kramer’s widow Karen Kramer and Donna Anderson, who acted in the film.

The majority of screen oxygen is afforded to Shute’s daughter and, somewhat inexplicably, journalist Gideon Haigh (who despite reliably offering nuggets of linguistic brilliance, is allowed more screen time than he is probably relevant for).

In a question put to Johnston by an audience member after the screening he was asked, “why did you not try to interview more people who were there? Perhaps Melbournians who were extras, or remember the filming taking place.” Johnston’s answer essentially came down to something along the lines of, we ran out of time.

One aspect of the film that cannot be faulted is Antony Partos’ score. Sonically evoking a sense of imminent apocalypse is probably not an easy task. But Partos–also responsible for the scores of Animal Kingdom and The Slap–provides a brooding musical accompaniment, which helps lift Fallout’s visuals. Some striking archival footage is included: Melbourne in the ‘50s looking–Gardner was right–rather desolate; Kramer’s crew filming on the Frankston shoreline before onlooking locals.

Ultimately, Fallout covers a fascinating historical period, but as a documentary it struggles to fully realise the story it is trying to tell.