Cutting to the chase – I really enjoyed Prince Avalanche. It was a genuine relief to watch something scaled back from the hyperactivity of modern cinema (I’m looking at you, Pacific Rim) and to sink yourself into a character-driven story about the shit we’ve all seen a billion times before, but still enjoy. I’m talking about loneliness, friendship, loss, rebirth and self-actualisation.

When explaining the film to my friend to attempt to coax her into coming with me, all I could say was “it’s about these two guys who are doing some highway works in Texas, and Paul Rudd has a moustache and Explosions in the Sky lay down some sweet jams”, and to be fair, that’s pretty spot-on. The plot is minimalistic, which allows for a deeper study of the characters within it. Paul Rudd and Emile Hirsch (who is looking more and more like Jack Black – seriously, google it) are really hilarious and amazing in the film and play off of each other like nobody’s business. It’s not directly a comedy or a drama, or even a buddy film, which I think allows it to hold this kind of enigmatic power over the viewer. 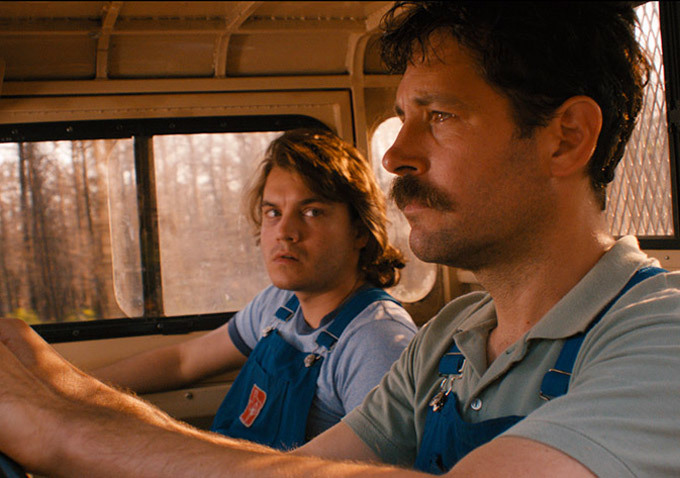 All of these wonderful things I had gushed over as I spilled out of Greater Union on Thursday night quickly dissipated when I learned that Prince Avalanche is actually a remake of a 2011 Icelandic film called Either Way (or Á annan veg if you want to get fancy and technical). I think it’s gotten to a point where this isn’t exactly a shocking tactic of Hollywood’s (see: The Girl With the Dragon Tattoo, Oldboy), but after watching the trailer for Either Way I found myself really off-put by how much of the dialogue from this Icelandic film was directly lifted from the original script (in English, obvs) and slapped into Green’s film. It made me feel like those quirky little lines that won my heart over in Prince Avalanche (such as Hirsch’s character referring to wanting to get his “little man squeezed”) were just cute little Google Translate faux-pas that the screenwriters of the Prince Avalanche didn’t want to change. A part of me felt, somewhat irrationally I’ll admit, cheated.

Is originality really that far gone? Is it that hard for the Western world to read subtitles? I understand that there’s the argument that they’re exposing these potentially unknown foreign films to a wider audience, but it’s hard to get behind a remake that lacks a creative reappropriation like something that Let Me In tried to do (but failed). I’m not sure the shifting of locations from Iceland to rural Texas is quite enough to satisfy my neediness.

These may just be the bitter ramblings of a pretentious film student, but I’m really wondering where genuine originality has gone in an age where it seems like everything has been done before; to find something in this world where it cannot be said that (to quote South Park) “Simpsons did it”.