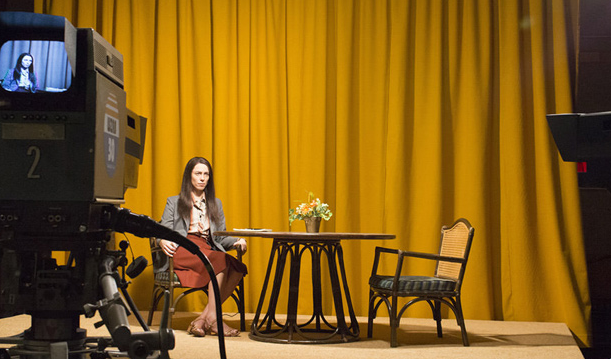 Forty-two years after it occurred, there’s a sudden interest in the suicide of Christine Chubbuck. In addition to Antonio Campos’ narrative film about the news reporter who shot herself on the air in 1974, called simply Christine, there’s a documentary version that focuses on an actress researching her role as Chubbuck in a hypothetical narrative film. That one’s called Kate Plays Christine, and it’s also playing at MIFF this year. It’s possible the two taken together will shed more light on why this tragic event occurred, because Christine alone does not get all the way there.

Chubbuck, played by Rebecca Hall, is a bit of a square peg in her Sarasota, Florida newsroom, and would be so even if she weren’t on the verge of obsolescence. Not only is she one of the last bastions of film over video, but she’s also one of the few who still sees the news as substance over style. She looks at handwritten notes rather than a teleprompter, she refuses to soften her harder edges, and she is almost painfully gawky. Worse yet for her career prospects in a male-dominated field is that her boss views her as a feminist, clarifying that she earns that descriptor by talking louder than everyone else. The factors working against her come to a head when the station owner announces he’s buying a second station in Baltimore, a top 30 market, and is looking to poach some talent. Needless to say given what ended up happening, the resulting audition period ends up magnifying her perceived weaknesses rather than her strengths, and her mother (J. Smith-Cameron) worries this is starting to look like another Boston – though what happened in Boston is never revealed. Mixed signals from a colleague she’s in love with (Michael C. Hall) complicate matters, and she starts to eyeball that gun in the gun shop more seriously.

Christine does well laying out the factors that contributed to Chubbuck’s choice. Campos’ film is executed as a devastating series of defining moments, and Rebecca Hall has so stepped inside this woman’s personality that the accumulation of indignities really registers. Hall is a terrific actress, but this is a side of her we have never seen, and she delivers an unnerving authenticity. That authenticity extends to the immaculate period production design.

What blunts the overall impact of the film is its tone. It’s almost jaunty, at least at the start, and the Christine we are originally presented with seems like the type of fighter who will bear all the slings and arrows with a sardonic laugh. To be sure, that tone starts to change, but we still remember that first Christine, and no amount of evidence feels like a satisfactory explanation for her reversal. That’s probably inevitable when trying to assign meaning to such a seemingly random event; the others in that newsroom saw some warning signs, but they didn’t see this coming either. Films often struggle with this search for greater significance, which may speak to why Chubbuck’s story has not gone before the cameras before now. It’s a bit like Foxcatcher, the film about the murder of wrestler Dave Schultz by billionaire John Dupont. These things happened, but there may be no lesson we can draw from it.