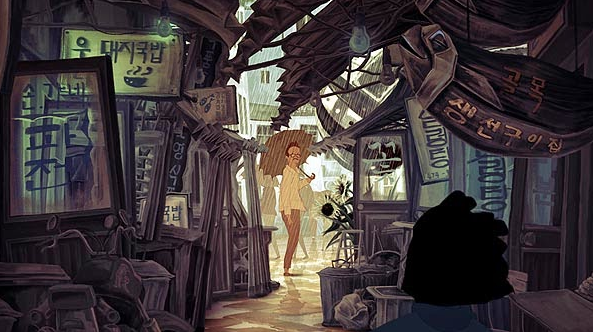 Zombies have appeared in all corners and outposts of the culture during our decade-plus of hardcore obsession with the shuffling undead, but we have yet to experience an animated Korean zombie movie. One of the most interesting things about Yeon Song-Ho’s Seoul Station, though, is that it hardly matters that it’s animated. The greatness that comes from it has a lot more to do with its script, its establishment (and then reassessment) of its characters, and its fitness with social commentary, long a hallmark of this genre. The fact that it gives us an original visual approach to the material is basically the cherry on top – and also probably a sign of the film’s budgetary restrictions. Though both of Yeon’s previous films, The King of Pigs (2011) and The Fake (2013), were also animated.

This is not what you would call top-notch animation, but it doesn’t need to be. It’s plenty good enough to deliver us the goods, going essentially for realism while giving us a few impressionistic flourishes here and there. The scenario is plenty realistic, as in, sort of depressing. A man with a bleeding neck wound stumbles by on a crowded Seoul street, and two young men at first go to help him – until they realise he’s homeless. The man’s value immediately drops in their eyes from a regular person legitimately in danger to an indigent person, for whom bleeding from the neck is probably a part of his daily existence. This man ends up being patient zero in a zombie epidemic whose spread is only controlled by the fact that it begins in the middle of the night. At first the victims are other homeless people in the titular train station, but the threat soon spreads to endanger police and others who work at night – including a young internet café addict about to get kicked out of his apartment, his girlfriend he’s trying to pimp out to pay the rent, and her father who comes looking for her.

Seoul Station would be plenty entertaining if the limits of its virtues were its tense moments of zombie-related dread, usually involving clever ways that the unbitten are separated by centimetres from the ravenous horde. But the movie also has a clear moral perspective that examines the social ill of the housing crisis, and I suppose more broadly, the global financial crisis. Numerous characters in this movie are either displaced from homes or on the verge of it, and many of their non-survival-related actions are motivated by a desire to hang on desperately to what they have. It’s a visible thematic undercurrent without ever dominating, as Yeon is equally adept at the primary purpose of any zombie movie: the rise in panic among survivors as they struggle to avoid teeth marks. Working with only four main characters – one homeless man also comes front and centre – Yeon nonetheless gives us a sense of the scope of the crisis and various engaging narrative threads within that. Seoul Station has its moments of shock and surprise, numerous instances of muted but highly suggestive gore, and a conscience. What more could a zombie movie fan ask for?