Sometimes you try to describe a film you love to your friends. You hear yourself saying, “It’s the story of an unlikely friendship between…” and realise that a plot description is not going to do the film any justice. The film is much better than you can communicate by describing verbatim what happens. You’d get a better result by simply kidnapping your friends and taking them to the cinema. Starlet is one of those films.

There really is no other way of describing the plot: Starlet follows the unlikely friendship that blossoms between a wealthy, but lonely octogenarian, Sadie (Besedka Johnson), and a twentysomething porn actress, Jane (Dree Hemingway). Jane, at first meeting, appears vacuous and dazed – a lostgirl from a Sofia Coppola film – young, ethereal, morally dubious.  Her flatmates (Stella Maeve and James Ransone) enjoy casual drug use, theft, bitching about their lives and creating drama out of nothing. When the film opens, you can feel director and writer Sean S. Baker stirring a character-driven brew which will eventually come to the boil with Sadie, Jane and her wayward housemates all involved, but the film unfolds at such a gentle and relaxed pace that the storytelling sneaks up on you in a refreshingly unforced way.

While cruising the local garage sales to look for furniture and décor for her room, Jane purchases a thermos from a fierce old woman who spits “No refunds!” from her porch after the transaction is over. At home, she discovers the thermos holds $10, 000 in bundles of rolled up notes. Her initial surprise is overtaken by the glee of sudden wealth, and Jane spends big. It’s only when she thinks of the old woman on her porch, selling her worldly possessions for money that she feels it might be best to return the thermos. Here’s where the unlikely friendship starts, though I can’t stress enough how gradually and effortlessly it develops. 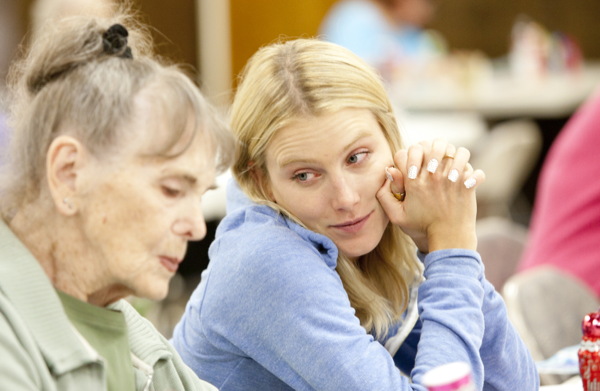 As the two women, Dree Hemingway and Besedka Johnson (in her only film role – she was discovered two years ago when the film was shot, and died earlier this year at 87) have an incredibly warm chemistry. It is also a real pleasure to see someone as old as Besedka Johnson was at the time of shooting up on screen. It made me realise how rarely we see octogenarians on screen in leading roles, and her presence in this film is invaluable – she gives one of those rare, unselfconscious performances that actors train for years to achieve.

The film also wins points with me for portraying elements of its protagonist’s life matter-of-factly, refusing to sensationalise what could’ve otherwise been the film’s “hook”; it’s controversial talking point. The fact that Jane works in porn hardly affects the narrative at all. It is simply her job, and it isn’t exploited to provide the film with a dose of nudity, but rather, to encourage us to understand her way of life. Her lifestyle is regarded with a kind of distance, as if we are just visitors looking in. The film encourages the audience to understand Jane – a character who is both likeable and unlikeable; who makes good choices and bad ones.

The film itself is shot mostly handheld, with a summery, dry look. Director Sean S. Baker favours long takes, especially during dialogue scenes between the two women, and the earthy cinematography helps ground the film. The film contains almost no non-diegetic music, right up until the very end, when the film makes its exit on a melodic, emotional high. Instead of revealing more of the plot, I think the film would fare better from comparison to its cinematic siblings. It sits comfortably alongside a film like Fish Tank (2009) by Andrea Arnold.

Fish Tank is another film that could sound plain on paper, but like Starlet, is an exercise in mood, naturalism and human relationships. The emphasis is on the mini personal transformations that take place in young people when they are learning who they want to be in the world, and how they want to behave in it. Both of the girls in Fish Tank and Starletare young, apparently superficial and directionless. It’s hard to tell in the first ten minutes if they will ever be interesting to watch. But I think the marvel of both films is their ability to let profound and emotional realisations grow in their characters, slowly and carefully. Starlet is, as Michael O’Sullivan put it, like “a flower growing out of a septic tank”

Starlet and Fish Tank are really lessons in empathy, and it’s a good lesson for a film to have. We could all afford to take more of an external interest in others – particularly in those we don’t feel connected to initially – but it’s something that grows over time, and watching it happen in Starlet is the film’s primary pleasure.