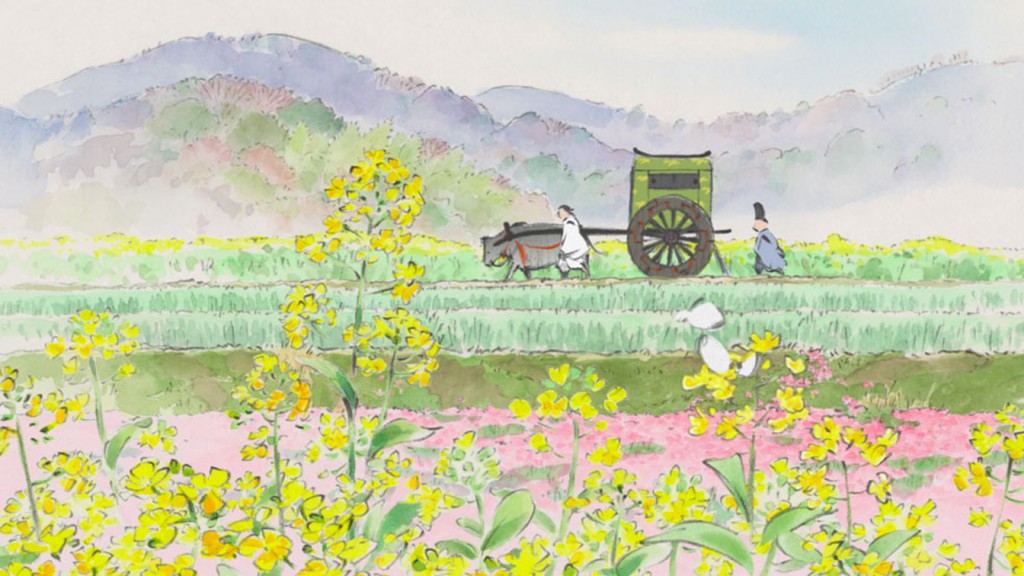 The latest, and it seems the final, animated feature film from the highly acclaimed Isao Takahata is also to be one of his best. The long time partner and contemporary of Hayao Miyazaki, and co-founder of Studio Ghibli, draws on a 10th century Japanese legend to bring us The Tale of the Princess Kaguya.

One day, the bamboo cutter Okina sees a bright light glowing from within a bamboo stalk. Upon examining, he discovers a tiny girl, who he immediately decides must be a princess. Calling her a blessing from heaven, he takes her back to his wife. Together they raise her, and ‘Lil Bamboo, as the local children call her, grows up quickly. Believing that she was meant to live as a Princess, the bamboo cutter builds her a mansion in the capital, and Princess Kaguya (as she comes to be called) is taken away from her idyllic life in the mountains to a world of rules and etiquette, where legends of her beauty spread far and wide.

The potential problem with adapting an old fairytale for modern audiences that features a female as the lead character is in keeping her relatable to modern audiences. Thankfully, Kaguya is delightful character – her independent spirit and love of life conflicts with the societal restrictions placed upon her, and she struggles with what she wants versus her desire to make her parents happy. The story is romantic, tragic, yet at times filled with moments of absolute joy – watching Kaguya run and laugh amongst the cherry blossoms in a rare moment of freedom, for example, will bring a smile to anyone’s face.

The style of the film too, reflects the time and setting of the story. Animated to resemble pencil sketches and watercolours, the traditional hand-drawn aesthetic is deceptively simple, and beautiful to behold. Takahata and his team of animators effectively use the very lines and drawings themselves to evoke and represent the anguish felt by the characters, the fear and pain (such as Kaguya running in tears from her father’s house) or moments of happiness. The accompanying score by Ghibli collaborator Joe Hisaishi is perfectly matched.

It’s interesting that both Miyazaki’s final feature (The Wind Rises) and Takahata’s Princess Kaguya both explore, in different ways, Japanese heritage and identity – The Wind Rises using a recent historical setting to comment on Japan’s role in WWII; Princess Kaguya using a much older setting to animate the more traditional aspects of Japanese culture and literature. The story is treated with a certain reverence, and what we are presented with is a tale that is grand and poetic, if a little overlong (but that can be forgiven).

In The Kingdom of Dreams and Madness, the documentary about Studio Ghibli that is also screening as part of MIFF, it is shown that Miyazaki and Takahata were working on their respective final films at the same time, but Miyazaki and producer Toshio Suzuki are often heard to say that Takahata was almost trying not to finish this film. It is unclear why, as Takahata doesn’t make an appearance in the documentary until the end. Perhaps it is a perfectionist aspect of his filmmaking practice, but the end result is a work to be proud of.