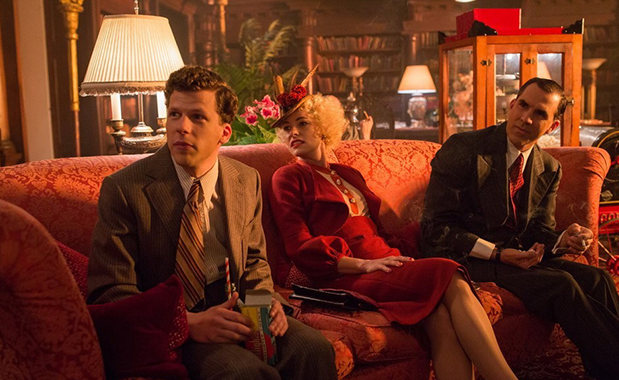 If Woody Allen’s recent films indicated he was shrinking in scope, even the good ones like Magic in the Moonlight, then Café Society returns a different verdict entirely. Allen’s bicoastal homage to 1930s glamour and its steep price is a dervish of warm pastels, twinkling nightclubs and golden hues, at once wrapping you in its embrace and keeping you at a melancholy arm’s length. Allen hasn’t been this funny in a long time either. The star of this movie, though, is not either Allen’s writing or his note-perfect romantic leads; rather, it’s the cinematography of Vittorio Storaro, who has turned this consummate man of letters into an unlikely visual stylist. If the praise is flowing like post-Prohibition wine, that’s just a measure of how unexpected Café Society is.

Period pieces have been a staple of late-period Allen, with films like Moonlight and his biggest recent critical hit, Midnight in Paris, having a foot firmly planted in the old world. Café Society is immersed in it. In fact, so committed is Allen to recreating another era, particularly in Hollywood, that his unwillingness to take any set design shortcuts is almost ostentatious. It isn’t just giving us a version of Grauman’s Chinese Theater with one tenth of the handprints and footprints that currently adorn the entrance, although the effort is appreciated. It’s traveling inside and outside any number of buildings that set the stage, be it a fancy talent agency or a Beverly Hills pool party so opulent that Jay Gatsby might have thrown it. Then on Jay Gatsby’s proper coast, where the movie spends most of its second half, it’s New York’s most chic and glittering nightclub, and a marble banister above a lake in Central Park that’s so shimmering, it might have been erected yesterday. 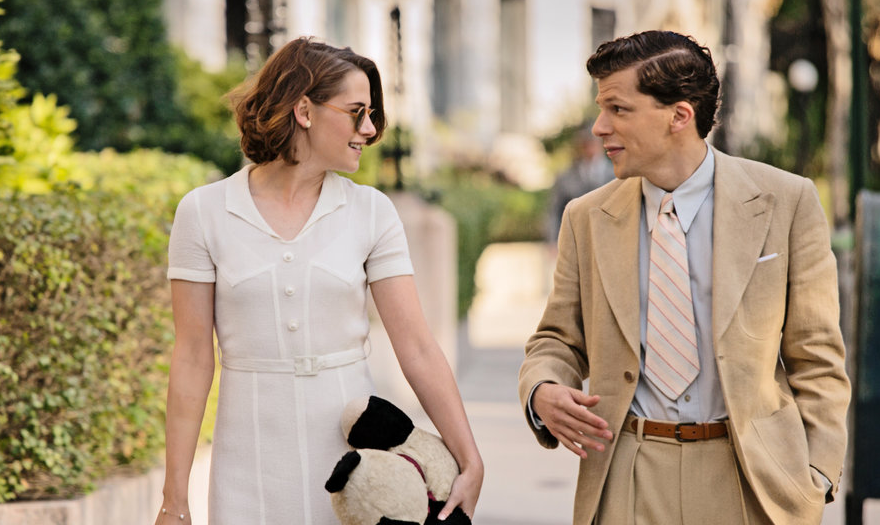 All this breathless adoration could probably stand a splash of plot. The Allen stand-in du jour is Jesse Eisenberg, though the actor playing his character’s brother-in-law (Stephen Kunken) is doing the more direct Allen impersonation. Eisenberg’s Bobby Dorfman is a nebbishy New York kid trying to discover the fruits Hollywood has to offer at the agency of his uncle Phil (Steve Carell), who drops the name of a famous celebrity in every other sentence. Trying to keep the kid out of his hair, Phil conscripts his assistant Vonnie (Kristen Stewart) to show Bobby around town, probably never imagining that Bobby’s obvious puppy dog infatuation could ever be reciprocated. That’s a problem because Phil has been cheating on his wife with Vonnie, a fact Bobby does not know – just as Phil does not know that he’s unwittingly pushing Vonnie into Bobby’s arms by taking the marital high road and breaking it off with her. Soon, Bobby becomes disillusioned with Hollywood and yearns to bring Vonnie back to New York to run a nightclub with his brother Ben (Corey Stoll), a small-time hood who has recently become a much, much bigger one.

There are a lot of striking things about Café Society, but the most obvious is the work of Storaro, who pours colour into the frame like he’s filling a pitcher with peach iced tea. Soft oranges and browns flood the screen, draping a gauzy layer of nostalgia over the proceedings. It’s possible that an Allen film has never looked this good. You want to swim in it. 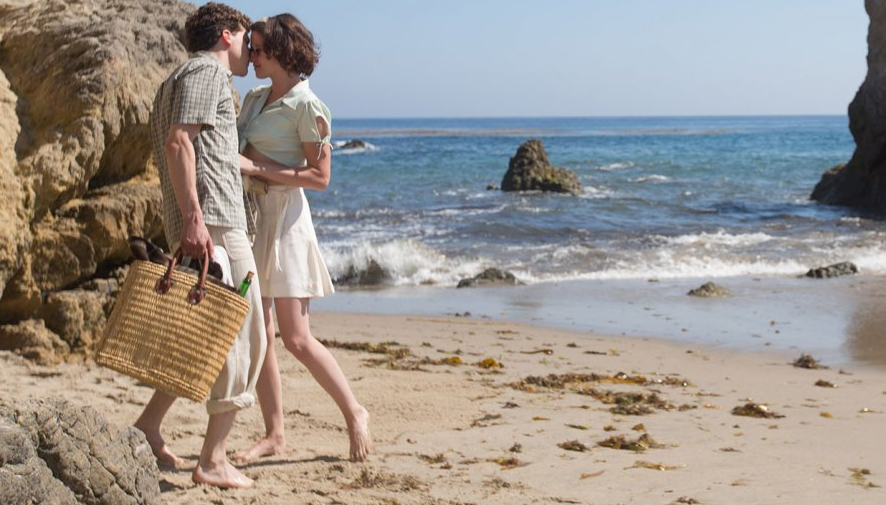 What Storaro’s touch does for the sets is one thing; for the actors, something else. Stewart has enjoyed a career renaissance in the past couple of years, but rarely has she emitted such luminescence as she does here. It’s no mere instance of flattering lighting giving her an idealised, classical quality. In fact, Stewart brings her familiar 21st century persona to the role, giving the character a dimension of realism rather than just making her an ode to classic stars. That choice fits, as it turns out. Stewart is doing some of her most subtle work as she lets the emotions and hesitations of an interaction dance across her face. Where the technique of co-star Eisenberg is sometimes visible – and one might think they’re starting to come as a package deal after co-starring in Adventureland and American Ultra – Stewart is showing us here that she’s a true natural, but also one with range, as a change in her character requires her to assume a different personality. Eisenberg missteps a bit out of the gate, but as he finds his footing, he’s just as key to concocting the swoony romance at the centre of the picture, one that sometimes aches.

The film belongs to these two, but this is not one of those Allen movies where the additional cast just sits on the sidelines. This is the best Allen has used an ensemble in years, as he’s filled in around the edges with actors who find real characters in their smaller roles, roles that end up feeling essential in populating this world. As just one example, Parker Posey and Paul Schneider play New York socialites who could really lift right out of the plot. Except that the flavour they bring is welcome, and the other supporting players have this same aspect to them. The subplot about Bobby’s gangster brother might flounder if it weren’t for the work of the woman playing their sister, Sari Lennick, and the man playing her husband (the aforementioned Allen impersonator, Stephen Kunken). Steve Carell also deserves a mention for bringing subtlety to what at first seems like a broad role. 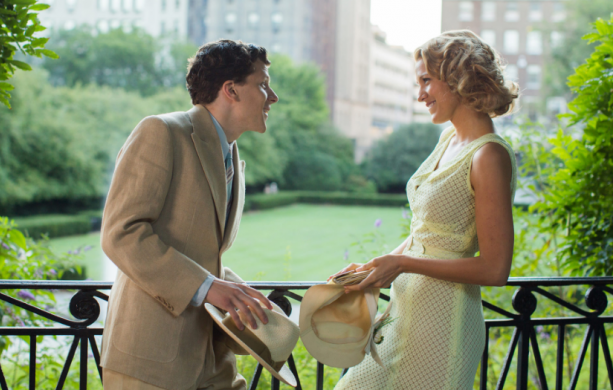 Textually, Allen is tackling some ambitious stuff here too. Café Society is about the sacrifices we make in pursuit of various versions of happiness, the times we follow our heart instead of our head and vice versa. There’s nothing cheap or glib about it, and the themes develop real gravitas at various points, in the midst of an overall light tone. He’s also tackling Judaism in a forthright and self-deprecating way, something that used to make its way into his films with regularity, but has fallen by the wayside in recent years.

Café Society is not perfect. One glaring problem is Allen’s own narration, 75% of which just repeats things we are already seeing on screen. There’s some thudding exposition in the dialogue as well. One interlude at the beginning involving Bobby and a working girl, entertaining in its own right, ends up feeling superfluous, especially since the actress in question (Anna Camp) is so charming, you almost feel like she should have grown into Bobby’s love interest instead of being discarded by the narrative. But Café Society is so much closer to the idealised version of an Allen film than we would have ever expected from a 2016 version of this man, whom age and scandal have turned into a shell of his former self. Sometimes, his former self still emerges.