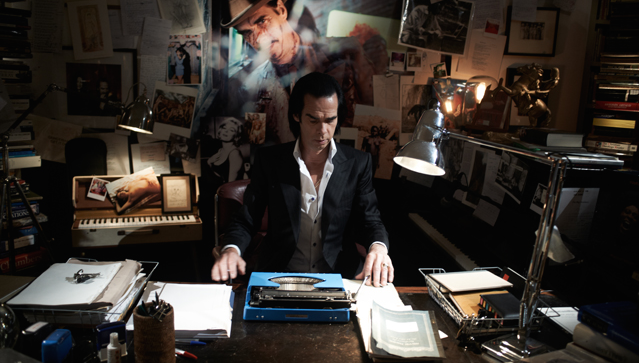 “Memory is what we are you know. And I think that your very soul is and your very reason to be alive is tied up in memory” – Nick Cave

This unique and illuminating film combines elements of ‘rockumentary’ and drama as it follows a typical day-in-the-life of Australian-born writer, musician, composer and all-round smooth customer, Nick Cave. The film is presented as taking place on Cave’s 20,000th day of existence as he is in the process of recording his latest album ‘Push the Sky Away’ with long time bandmates The Bad Seeds. This film is not only an insight into his current life as a performer, but a personal look back at his experiences and relationships that have brought him to this point in time.

The film begins with an amazing lightning fast time travelling montage of images from Mr. Cave’s life – from birth to the present – superbly put together by award-winning editor Jonathan Amos. This sequence is a condensed, albeit exciting trip down memory lane, especially for Cave’s devout fans. Using a mixture of narration, conversations and interviews with his colleagues and his own personal reflections, we are invited not only to catch a glimpse into Mr. Cave’s creative process as a writer and musician; his role as a husband and father, but we also get a more intimate understanding of his greatest fears and regrets as a human being.

With live concert footage and archival photos and diaries from his early rambunctious days in punk rock band ‘The Birthday Party’, to his current suave performances in the studio and at the Sydney Opera House with the Bad Seeds, Cave relishes the transformative experience that being a performer allows. Connecting to an audience and getting up on the stage and becoming whoever you want to be – a God-like figure, as many of his fans see him.

One of the most overarching themes in the film is the importance of memory and the joy that comes from cherishing the “precious memories that define our lives, memories that we spend forever chasing after”. There are personally revealing conversations with Cave’s therapist (played by real-life psychoanalyst Darian Leader) about his early childhood in rural Australia, his first sexual experiences, his past drug use and his father’s death. On a more lighthearted note, there are also wonderfully candid and humorous conversations with Cave’s current guitarist, bandmate and longtime friend Warren Ellis which shows the close nature of their personal and professional relationship with has flourished over 20 + years. There is also a series of insightful dreamlike interactions with some ‘ghosts of the past’, who appear in Cave’s vintage Jaguar as he drives his car around the dreary, yet picturesque Brighton. Former collaborators actor Ray Winstone, musician Kylie Minogue and guitarist and musician Blixa Bargeld all discuss their relationships and the creative process with Cave.

Perhaps the biggest crime of 20,000 Days on Earth is that it is more of an embellishment of actual reality rather than a true warts-and-all documentary. Directed by Iain Forsyth and Jane Pollard (who have previously directed videos for Nick Cave and The Bad Seeds) and co-written by Nick Cave himself the film often conveys an overarching tone of self-indulgence, but what else would we expect from Mr. Cave who is a self-confessed “ostentatious bastard”.

Despite Cave’s success in his stellar career as a creative tour de force, deep down under all the dapper suits gold jewelry and gothic mystique , he is really just a genuinely interesting man – an ageing rockstar who is ultimately fearful of losing the things he cherishes most – his creativity, his memories and his ability to perform. This truthful confession shows us that despite his powerful aura, he is really just human like all of us.