in All Is Lost

There is a review of All is Lost entitled “How Not to Sail” which dismisses the film as completely illogical, seeing the film as an instruction manual on how NOT to travel solo in a yacht across the Indian Ocean. After an onslaught of jabs directed at the implausibility of every decision Robert Redford’s yachtsmen makes, the review ends with an exceedingly confident thumbs down. Funnily enough however, if there was anything I could extract from this review, it’s that there is something to be respected in a simple reading of the film. It would be too easy to inflate All is Lost with theories about man vs nature, but it’s simpler, and better, than that. What makes director J.C. Chandor’s (Margin Call) film superior isn’t some romantic predilection for grandeur, but rather its understated treatment of character.

Summarising the plot too heavily won’t do this film many favours. Let’s just say a lot goes wrong for Robert Redford’s character, listed only as ‘Our Man’ in the credits. A voiceover opens the film; a letter for whom we are not entirely sure. In it there are apologies, acknowledgements of failure, last-ditch attempts at reconciliation. Our Man is seemingly at his end. It lasts for about two minutes and is essentially the only dialogue we hear throughout the film. A flashback to eight days earlier and a floating shipping container has just ripped a hole in the hull of his yacht, causing internal flooding and a ruined electrical transmitting system. Bad luck, storms, injury, sharks and isolation follow as Redford’s man stubbornly evades a barrage of death threats. 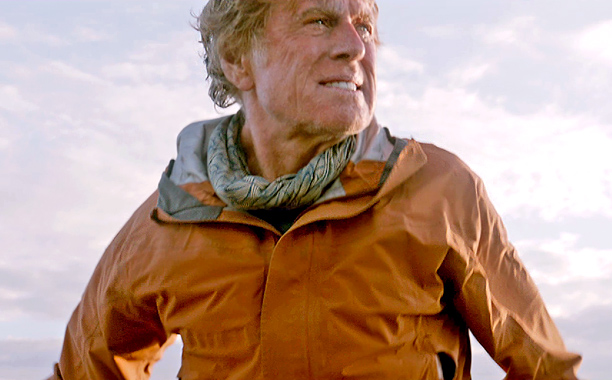 Any need for dialogue in All is Lost is replaced by Redford’s impenetrably hardened visage. Though he’s losing the battle, he retains his poise and style. But to admire him for this doesn’t quite sit right. His stoicism isn’t fully realised. It’s translucent, sad almost. There is a clear sense that he’s masking something, and each expression that has the balls enough to flicker across his weathered face keeps this mystery interesting. Though we can only guess, we’re forced to question what actually drove this man to the middle of the ocean in the first place.

The camera complements this idea with some intimate close ups, moving in and around the yacht, touching on small details in the underbelly: cups, saucers, maps, and travel logs, but never settling too long or too close to Redford’s face, perhaps unwilling, or like us, unable to fully comprehend him. In the absence of conversation, J.C. Chandor uses sound to his advantage. A combination of whipping sails, creaking wood and crashing waves that create enough tension to keep the film moving, often at a thrilling pace.

It would be unfulfilling to think big when watching All is Lost. It’s a simple story, both exhilarating and subdued, about a man who remains curiously unreadable as he fights for his life.