David O. Russell has been on a bit of a streak of late, with The Fighter and Silver Linings Playbook both being Oscar winners. In American Hustle, the director reunites stars of The Fighter Christian Bale and Amy Adams, and stars of Silver Linings Bradley Cooper and Jennifer Lawrence, to present his take on a fast-paced crime caper. Based loosely on real events, and with such an ideal cast, does this film live up to the slick, stylish entertainment it promises to be?

Irving Rosenfeld (Bale) is a small time con artist who is very good at his job. He and his partner (and lover), Sydney Prosser (Adams) con desperate people out of thousands of dollars with ease, and live a very comfortable existence – that is, until they are caught out by enthusiastic FBI agent Richie DiMaso (Cooper). Now Richie wants their help – he wants to take down the big players in the con scene, even if that means getting involved with politicians and the mafia. Rosenfeld’s conscious begins to trouble him when well meaning, but naïve mayor of Camden, New Jersey, Carmine Polito (Jeremy Renner), gets caught up in some dodgy dealings. Things take a turn for the dangerous when the mafia comes into play, and Irving’s wife, Rosalyn (Jennifer Lawrence), with her unpredictable nature, could bring the whole thing crashing down.

Despite some lagging moments, the majority of Hustle is filled with this fantastic sense of frenetic energy. Tight pacing, fast-talking, and a camera that is always on the go keep the audience almost constantly hooked. Russell and his crew have really succeeded in capturing the feel and look of the 70s (so much yellow) and overall, the result is a funny, very entertaining film. This is especially impressive considering that much of the dialogue was apparently improvised. Still, the downside of that is that it occasionally makes for a plot that is hard to follow. 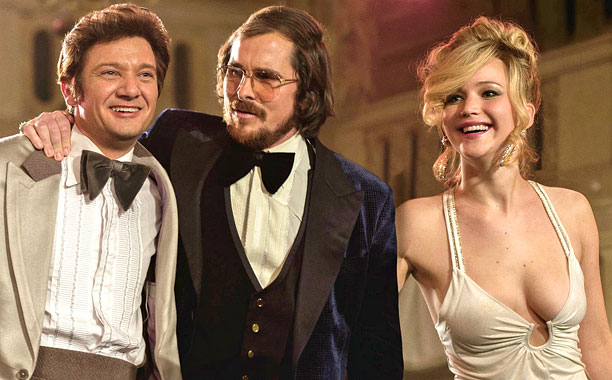 What really makes American Hustle work, is the cast. All of these characters (with the possible exception of Renner’s upstanding Mayor Polito) are unpredictable and manic. The main three (Cooper, Adams, Bale) play off each other so, so well – the atmosphere is charged! Bale’s transformation is once again astonishing and in Rosenfeld we find a main character we can form a real attachment to, despite him being a bit of a crook! It’s his honest, real love for his young son and his friendship with Carmine that does that. Amy Adams is something of a mystery, and it is her motives that we question the most. Is she out to help Irving, Richie, or herself? Cooper is the most volatile of the entire group, you can be sure any scene with him in it will pack some laughs. Sadly, Jennifer Lawrence feels underutilized if anything, although her Rosalyn had some great scenes. I would have liked to see more of her.

Minor flaws aside, American Hustle is a fun, often absorbing film. There is no doubt that the fine work of the ensemble cast draws everything together and makes it work – there is a degree of subtlety in their characterisations and performances that continually intrigue and amuse. It is a strange film – very much crime caper that doesn’t know if it wants to inject moments of serious reflection – but well worth your time.