"Any idea that Bill & Ted Face the Music is just a cash grab goes out the window early on."

"Causation conundrums are a hilarious afterthought, as it’s clear that their ignorance is existential bliss."

Bill & Ted Face the Music provides a fond look at the title characters’ legacy in this crazy world they introduced us back in 1989, where both time travel and movements within the afterlife are possible. But the characters have also had a pop culture legacy for years. They were the trailblazers in a succession of dimwitted duos that included Wayne and Garth as well as Beavis and Butt-Head. The archetype they helped establish – the good-hearted, intellectually-challenged teenage rock n’ roll fan – continues to speak to us in some essential way, which is how a sequel nearly 30 years after Bill & Ted’s Bogus Journey is even viable. 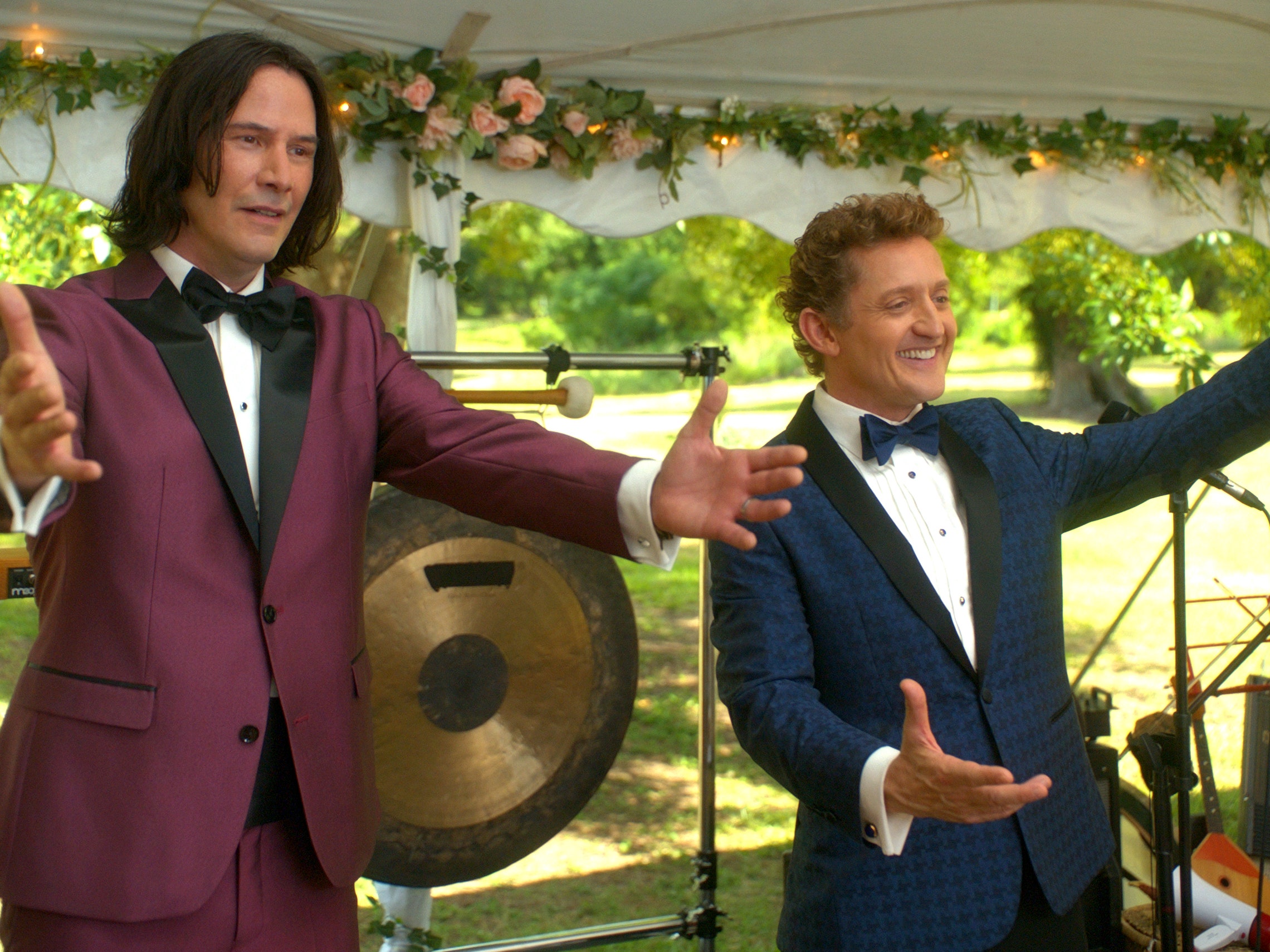 The drawback to making a sequel, of course, is that Keanu Reeves (age 56) and Alex Winter (age 55) could be too old to effectively portray their original personalities, at least not if we want to maintain the fantasy that they ended up coming good. Well, Dean Parisot’s movie leans into that too. There are enough delightful surprises in Bill & Ted Face the Music to give away one small one here: We see a version of the duo when they are really too old, pushing a century. If that seems like a spoiler, well, don’t forget that anything is possible in a series where a magical phone booth can transport you to any point in history, and a Grim Reaper is available to revive you should anything go wrong. And you’ll be glad to know that a 95-year-old Bill and Ted are still consummately themselves, still dropping the word “dude” and still agile enough to strum an air guitar.

Bill & Ted Face the Music cleverly incorporates both of the essentially different premises of the first two movies. At first the movie seems to be a correction to Bill & Ted’s Bogus Journey, as the time-traveling phone both takes centre stage, transporting many others through time than just our protagonists. Over the course of these fast-paced and dense 91 minutes, though, the movie has plenty of time for more existential issues – including the fact that reality itself could collapse if Bill and Ted don’t hurry up and write the song that will unite the world.

Rufus, their original guide through time, told the two they would bring the world together with their music – and in a nice nod to the deceased George Carlin, Rufus appears here briefly as a hologram, using original footage from Bill & Ted’s Excellent Adventure. The problem is, Bill and Ted never actually wrote the song. They’ve lived happy lives with the princesses they initially plucked out of medieval times, now played by Erinn Hayes and Jayma Mays, and have spawned two familial legacies – dude-talking slackers who are their clear progenies, Billie (Brigette Lundy-Paine) and Theadora (Samara Weaving), with each daughter named not after her father, but her father’s best friend.

But this life has featured the failure of Wyld Stallyns, their band, and now that they’ve reached mid-life, there’s no clear path to creating the future Rufus told them would happen. So Rufus’ daughter, Kelly (Kristen Schaal), has come back in a time-traveling egg to tell them they have less than 90 minutes to write the song before the space-time continuum goes belly up. You’d think she could have given them more time. Then again, a time-traveling phone booth gives you all the time you need, so Bill and Ted decide to go forward to a time when they’ve actually written the song – and steal it from themselves. 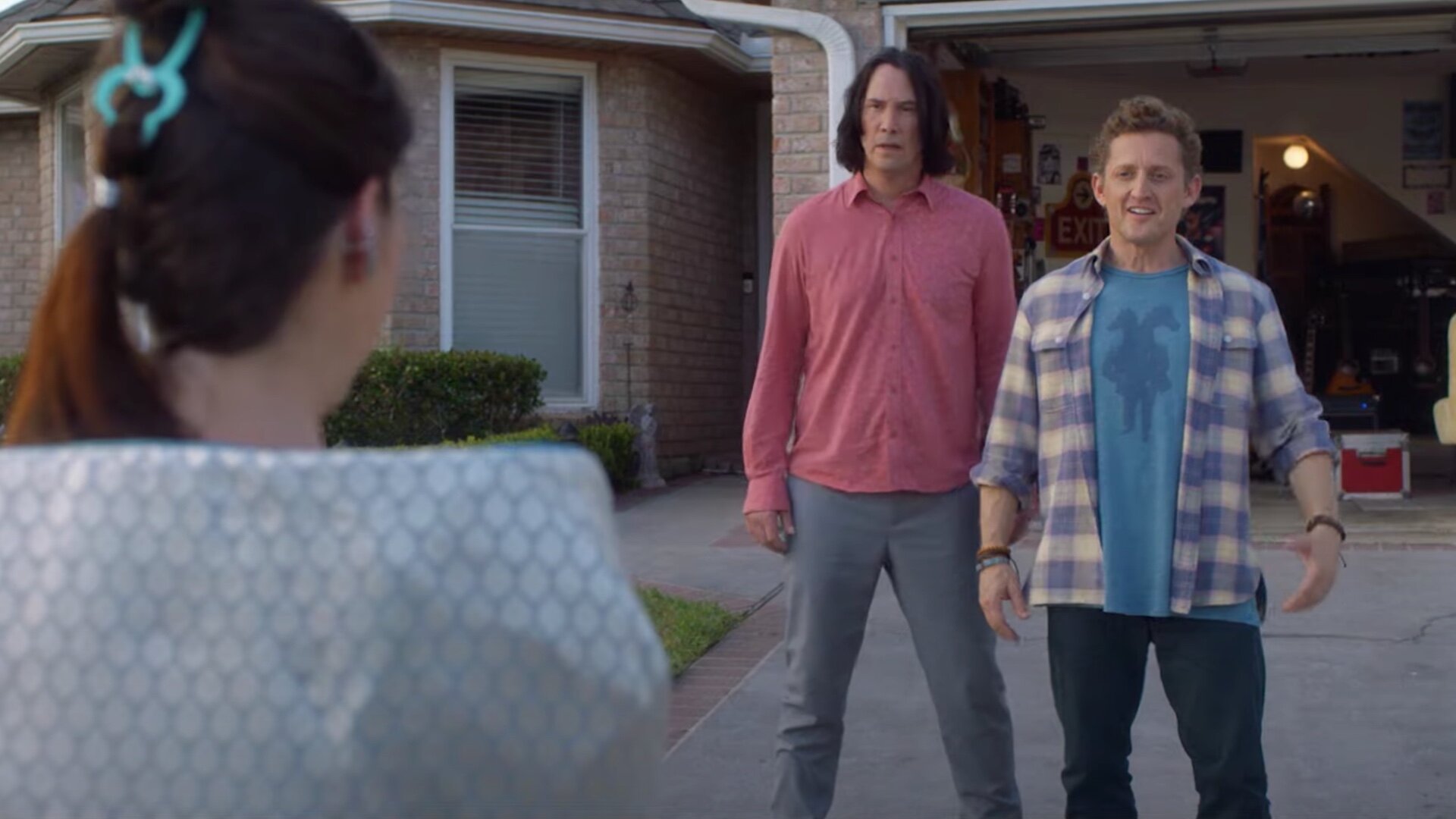 Any idea that Bill & Ted Face the Music is just a cash grab goes out the window early on. First, it’s Reeves and Winter putting you at ease that they can slip back into those old personas like that comfortable jumper at the back of your closet. From their earliest moments on screen, it’s clear it was a good idea to do this, as either the sense memory takes over, or Parisot coaxes a warm facsimile of what they did 30 years ago.

What really sells the movie, though, is the script. Original screenwriter Chris Matheson is on board with co-writer Ed Solomon, and the story they’ve given us both harnesses the giddy logic of the original and sets it off in new and wonderful directions. Bill & Ted’s Excellent Adventure punctured the usually serious machinations of time travel, and that’s only more the case here, as the duo make a number of abortive attempts to arrive at a moment in time when they’ve actually written the song. Causation conundrums are a hilarious afterthought, as it’s clear that their ignorance is existential bliss. In truth, reality should have collapsed in on itself long before this.

As you might expect from other franchises revived after a long hiatus, this movie is also about passing on the baton, while being right on representation issues. As such, the daughters are given a lot to do here, as Lundy-Paine and Weaving submit loving homages to/impersonations of their characters’ iconic dads. As they travel through time to assemble the band that will help Bill and Ted play that epic song, the writers are also clearly trying to correct the white European bias of the original historical figures. That means we get to spend time with the likes of Louis Armstrong and Jimi Hendrix, uncannily reincarnated by actors Jeremiah Craft and DazMann Still.

And there’s still comic gold among the supporting characters. Schaal is great as the put-upon daughter trying to keep reality from imploding, as her mother (Holland Taylor) has sent back a kind of terminator robot to kill Bill and Ted, and she could be caught in the crossfire. That robot, played by Anthony Carrigan, is this movie’s great new comedic inspiration in the tradition of William Sadler’s Death – though Sadler himself is also back, to remind us how he single-handedly salvaged Bill & Ted’s Bogus Journey. His return alone is probably worth the price of admission, which in this case is a premium $20 rental on your various platforms, starting on 10 August. 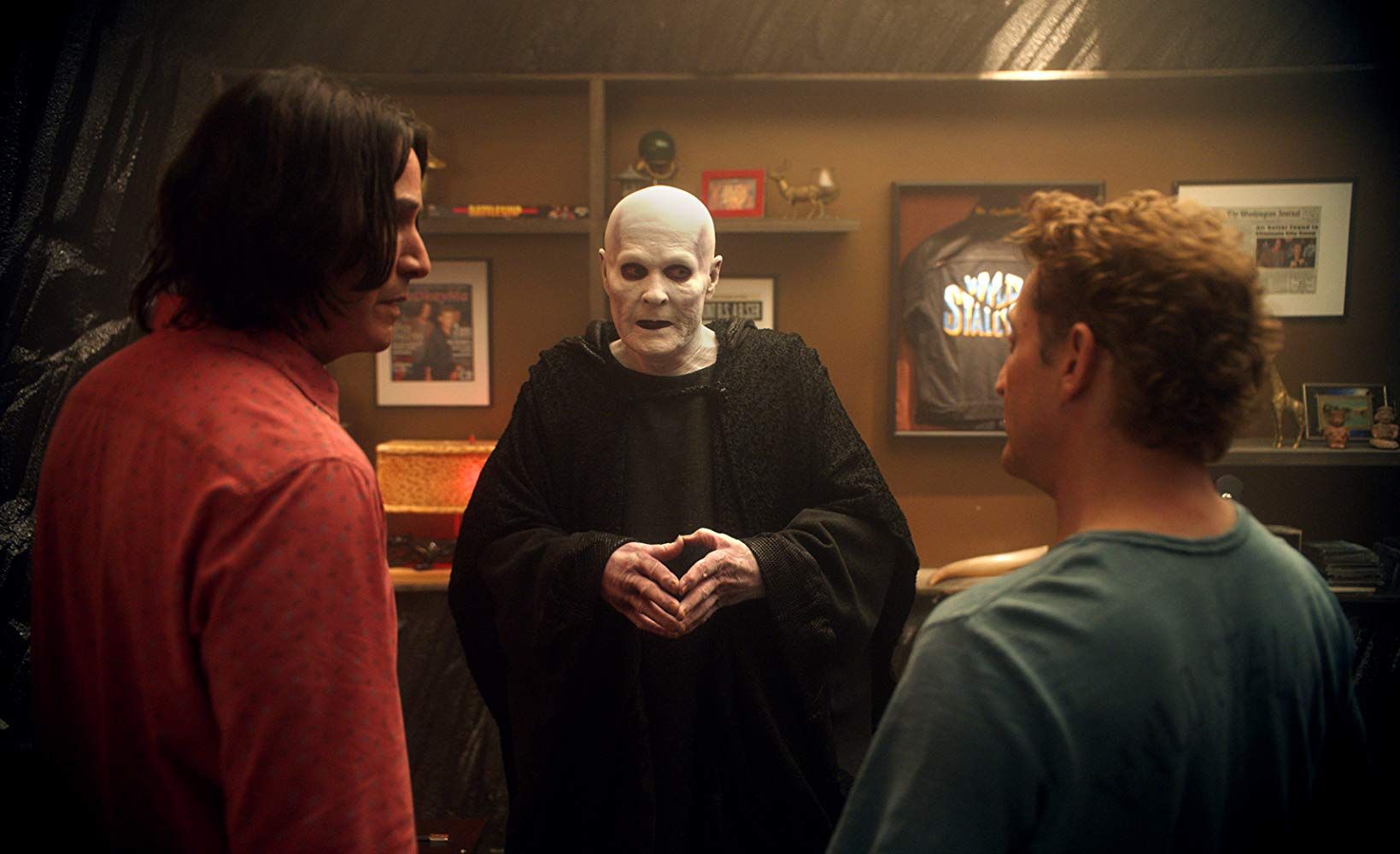 There are any number of possible timelines where Bill & Ted Face the Music could have been an embarrassing disaster for all involved. But all involved synergistically produced the right iteration, one with a contagious heart and love of music. This movie leaves you not only thankful for its existence, but open to further sequels if they feel like partying on.