"Birds of Passage is one of those types of narratives that you could just sit and marinate in for hours."

"What makes Birds of Passage so rich is the specificity of the details within the familiar overarching structure of a crime epic. "

The toxic relationship between indigenous peoples and the more recent occupants of their land gets seen through the lens of the early Colombian drug trade in Birds of Passage, a masterful new film from the director and producer of 2015’s Embrace of the Serpent. Ciro Guerra, who directed Serpent, and Cristina Gallego, who produced it, have teamed up here as co-directors, offering another look into the ways in which the traditions of native Colombians have been brutishly updated by their interactions with “alijunas,” in the parlance of the film’s predominantly Wayuu language. The film begins with a traditional tribal dance that functions as a presentation of a young, now marriageable woman to the world, but ends somewhere quite different, with two decades of lost innocence paving the way for far greater losses.

Based on true events that took place in the northern Colombian peninsula of Guajira between the 1960s and the 1980s, Birds of Passage starts off innocently enough with a young man, Rapayet (José Acosta), trying to acquire enough goats, cows and necklaces to fulfil the dowry required in his desire to marry Zaida (Natalia Reyes). They’re the younger generation of two powerful families among the Wayuu indigenous people, and though they have assimilated to the modern ways of the 20th century in some respects, they still honour the religious and social traditions that have informed their ancestors for centuries. With no ordinary means to acquire such an expensive dowry, Rapayet, who has dabbled a bit in low-level criminal activities, graduates to the big time by engaging his “alijuna” friend Moises (Jhon Narváez) to acquire and sell marijuana to a group of American Peace Corps volunteers. One of those Americans has his own importer/exporter ambitions, and soon, a rather sophisticated drug trade has blossomed.

This doesn’t sit well with the Wayuu, as embodied by their matriarch and mother to Zaida, Ursula (Carmiña Martínez). She has the ability to “talk to dreams” and takes many of her instincts about people, and cues on how to promote wealth and progress for her family, from the spirit world. She gets a bad vibe from Rapayet, but she does not heed it, and allows the drug trade to become a normalised part of her family’s prosperity.

As material wealth changes them and requires unsavoury practises to safeguard the family’s interests, there are still any number of traditions that are immutable, allowing them to retain a tenuous hold on the old ways. As with most tenuous holds, though, it’s only a matter of time before the grip is lost entirely.


Birds of Passage is one of those types of narratives that you could just sit and marinate in for hours. It feels like it could make a great TV miniseries, something like Narcos. It’s all the more miraculous, then, that Guerra and Gallego create such a rich tapestry of characters, in multiple generations and with multiple ethnic backgrounds, in barely over two hours. Birds of Passage could easily take its place next to some of cinema’s great decades-spanning crime epics, but it is also distinct from them by virtue of its location and the unique narrative conditions thereof.


The Colombian jungle and the more desolate coastal plains of the Guajira peninsula trade off as the backdrop for the series of escalating tensions, and attempts to stave those off through recompense, that make up the meat of the narrative. They also function as a metaphor for the vastly different traditions brought to bear by the indigenous people and the “ones who damage” (the literal translation of the term “alijuna”). The film ponders that damage as the balance between the old ways and the new becomes increasingly unsustainable. 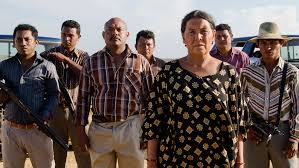 What makes Birds of Passage so rich is the specificity of the details within the familiar overarching structure of a crime epic. One of numerous fascinating set pieces involves a “second wake” of a deceased elder who was collateral damage in an earlier episode between various factions in this drug trade. After eight years in a coffin, the man’s bones are again exposed to the sun, polished, and subjected to the most reverent religious rites. In a film full of them, it provides another direct contrast with the ways of the outsiders, where the bodies stay buried. In fact, at one point in this film, not only are bodies buried, but so is the plane in which they arrived, disassembled panel by panel until it’s compact enough to go subterranean. The practises of the two overlap and intertwine as the narrative progresses.

As did the directors’ previous film, Embrace of the Serpent, Birds of Passage also contains images from dreams and visions of the spirit world, though they are used sparingly. The incursion of the spiritual into the depressingly earthbound realism of drug trafficking is another way the film explores contrasts. Gallego and Guerra’s command of images – a pickup truck approaching ominously through the desert, a conflicted figure in traditional robes against the sunset – returns from that previous film as well. 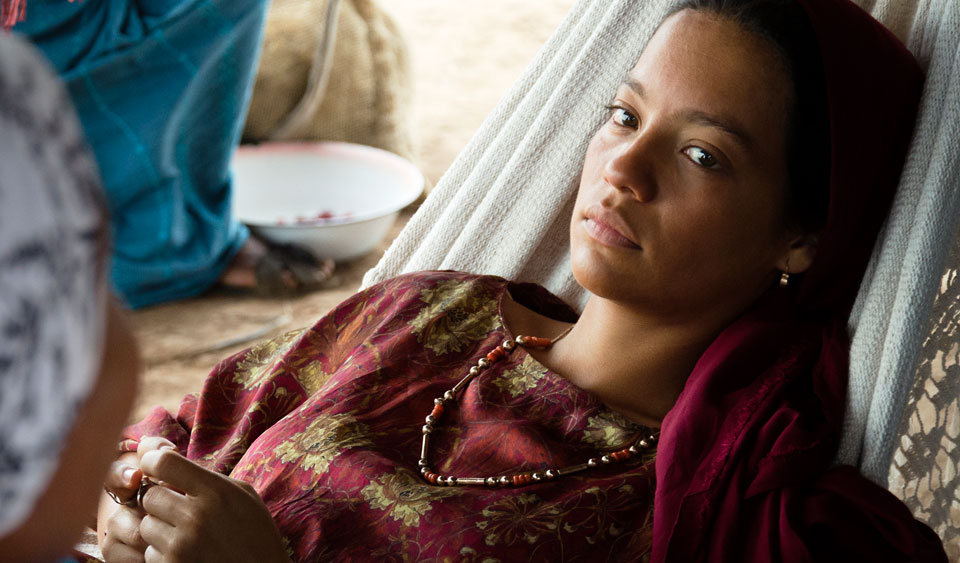 There may be no moment as jarring as the burst of colour toward the end of the black-and-white Serpent, but colour still stands out stridently in this environment composed largely of browns and greens. The opening mating dance, for example, includes Zaida quick-stepping with Rapayet in a circular gathering of onlookers, she forward and he backward, her whipping red robes giving her an appearance of something spectral. As with most of what is presented in this film, it functions as metaphor, the contrasting directions of the dance presaging the conflict that may ultimately doom these people. While Birds of Passage is highly specific, its perspective can be applied universally to the rampant destruction wrought by colonialism anywhere in the world.