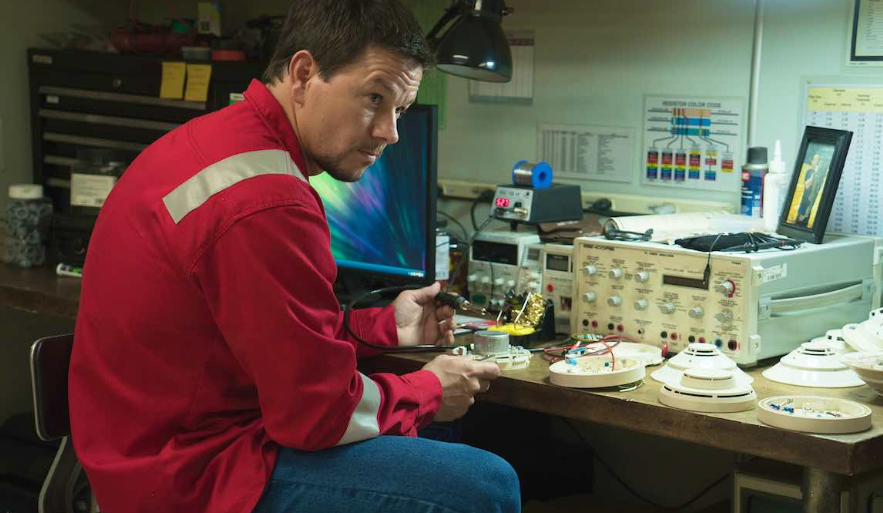 There’s a Robert Langdon film coming out this month called Inferno, but that could have also been the title of the new movie Deepwater Horizon. Spoiler alert for anyone who’s had their head in the sand the past six years, but the titular rig drilling a well for British Petroleum off the coast of Louisiana went up in a huge fireball on the 20th of April, 2010, and Peter Berg’s new film spares no expense showing it. Once things start to go pear-shaped on the vessel so large you’d assume it were staked into the ocean floor – it isn’t – it’s like one high tension wire snapping violently away from its moorings after another. The screen fills with such bursts of chaotic, fiery, metal-warping activity that it’s difficult to believe only 11 men were lost to its fury.

Berg may not be Michael Bay, but he’s had a career that feels kind of Michael Bay adjacent. And indeed, Deepwater Horizon is just the kind of movie Bay might have made in one of his many attempts to go legit. The appearance of frequent Bay collaborator Mark Wahlberg sort of cements that impression – “cement” being a poor choice of words, as it was the failure to properly test a pour of cement intended to barricade the oil that led to the disastrous chain of events on board the rig. But Berg is better than Bay in a bunch of key ways, all of which he demonstrates here. Yeah, this may be the most number of separate explosions you will see in any film this year, but they are to a purpose, and that is to put us right in the middle of a very particular type of disaster we have yet to experience on film. Berg’s skills are put to use bringing a visceral immediacy to the action, and it’ll be difficult for most viewers to watch the events unfolding without unconsciously tightening their grasp on their armrests. 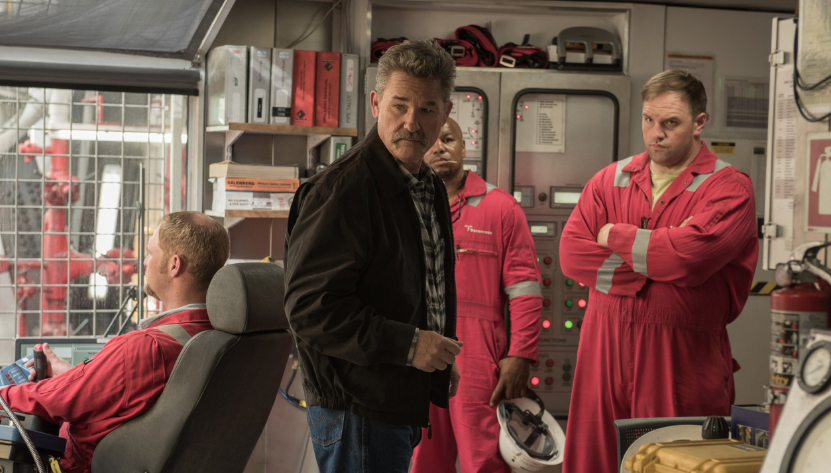 The guys we follow most closely here are Kurt Russell and Wahlberg, Russell a sort of foreman known as Mr. Jimmy, Wahlberg an engineering expert of some kind. What each guy does is not entirely important, because this film is content throwing lots of jargon at us without fully explaining everything – and that’s a good thing. We know some regulations have not been followed and some corners cut by the honchos at BP, embodied by John Malkovich in a deep southern drawl, and we get various explanations here and there of what’s at stake without anything getting belaboured. We know shit’s going to blow up and that’s all that really matters. When the film gives us exposition, it does it sneakily and effectively. For example, we get a basic primer on the role of Wahlberg et al when his daughter reads him a report she’s going to do on him at school, and uses the pressure built up in a can of Coke as a foreboding demonstration of the principles of collecting oil. It’s a smooth way to make the medicine go down. The naturalism continues with the camaraderie and piss-taking among the lads on the rig, who speak to each other in ways that feel both natural and clever. In one memorable instance, one guy delivers a withering insult by calling the other “You Democrat.” These are blue-collar folks, and the ones that lived will be voting for Trump.

Naturally, Russell’s and Wahlberg’s characters get a ton of “I told you so” moments while Malkovich is made to eat crow through a mouth covered with oil (he bears the brunt of one of the first spurts). The familiar progressions of a disaster movie take over, with shit going from bad to worse and pauses to acknowledge the loss of characters we’ve met before. In fact, the set itself is probably the primary thing that makes this movie feel distinctive, as an oil rig getting the world’s most violent enema seems unlikely to have been so convincingly recreated on film. 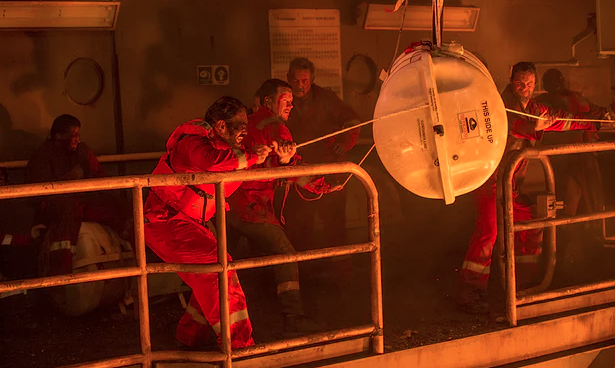 Except Deepwater Horizon does have another couple of those nice touches worth mentioning, and one is Kate Hudson, stuck in the usually thankless role of the wife back home who frets over her husband. Not only does Hudson have a great rapport with Wahlberg – the attempts to give them a natural relationship, usually so stilted, actually do feel natural here – but she frets in restrained ways, which are all the more emotionally effective because of that. Neither is their daughter exploited to heighten the urgency of Wahlberg’s Mike Williams getting back to his family.

But if there’s one way this film really undercuts our expectations, and distinguishes itself from the Bay brand of heroism, it’s in showing us how such a disorienting cock-up bashes all the machismo out of a bunch of tough guys. Russell is in full-on tough guy mode here, his moustache creeping all the way down to his chin, his bullshit detector always on high alert. Yet you know where he is when the shit hits the fan? He’s in the shower. In fact, he’s blown out of his shower, clear across the room, leaving him naked and bleeding, barely able to see, a giant wedge of glass in his foot that makes Bruce Willis’ injuries in Die Hard look like mere scrapes. We tamper with the primal pressures under the earth’s crust at our peril, even if you’re a tough guy.