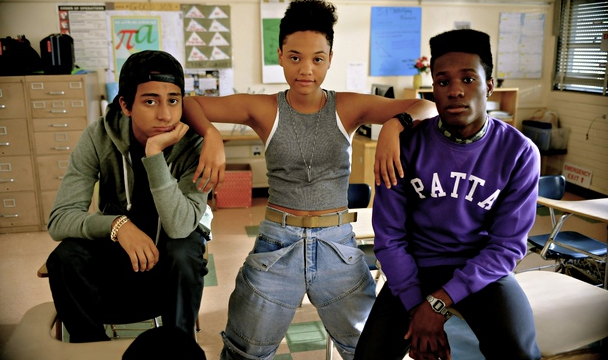 Turnt up! Dope is the newest film from Nigerian-African writer and director Rick Famuyiwa. It made waves at the 2015 Sundance Film Festival, and it’s easy to see why. It’s both a rollicking coming-of-age adventure and an effervescent ‘message’ film; think Superbad meets Do the Right Thing. Add a killer score of ‘golden age’ 90s hip-hop, energetic performances from a young black cast, and every editing trick known to man and you have a film that is destined for cult status, if not mainstream commercial success.

Dope depicts the adventures of Malcolm Adekanbi (a break-out performance by Shameik Moore); a high school senior and self-professed geek who – with two best friends Jib (Tony Revolori) and Diggy (Kiersey Clemons) – are obsessed with ‘white’ things; skateboarding, ‘TV on the Radio’, and getting straight-As. They also indulge in that other favourite white pastime – record shopping. For Malcolm, the golden age of 90s hip-hop starts with Public Enemy’s It Takes a Nation of Millions and ends with Jay-Z’s The Blueprint. And it doesn’t even matter that neither of those records dropped in the 90s.

Of course, Malcolm’s bullied relentlessly – both at school and in the hood. His attraction to the the beautiful Nakia (Zoe Kravitz) sees the three underage kids attend the party of local Inglewood drug-dealer Dominique (A$AP Rocky, fantastic), who offloads a backpack full of ‘molly’ to Malcolm during a shoot-out with the police. Dangerous characters in the hood want the drugs back; and Malcolm’s very life – and his admission to Harvard – depend on him transitioning from geek to OG before they find him. 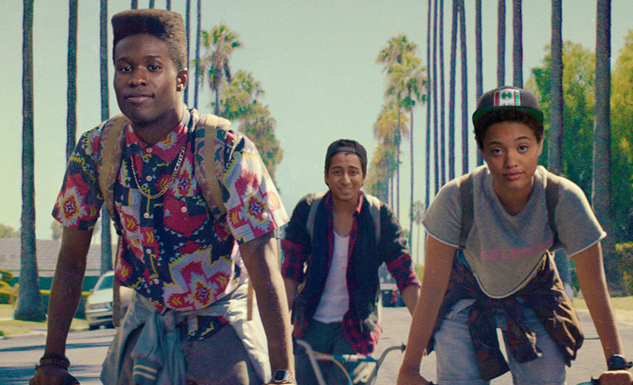 It’s a conventional enough set-up, but Famuyiwa makes it work by turning up every onscreen element to the max. The colours are bright, the editing is frenzied, and the n-bomb is dropped so frequently that it puts the Friday films to shame. Mysteriously, it works extremely well. Famuyiwa plays the drive-bys, overdoses and poverty mostly for laughs, juxtaposing the grim realities of the Inglewood streets with vibrancy and confidence. Special mention must go to model Chanel Imam; a scene involving nudity, drug psychosis, and all kinds of bodily fluid are somehow some of the classiest in the film.

Dope loses comic momentum in the final act, as the central message of the film is hammered home straight down the lens. Arguably though, it’s a valuable epilogue. Behind the laughs, Dope’s all about intersections between white and black stereotypes – and the point at which prejudices outweigh the individual. Malcolm, as talented as any Harvard applicant, is caught between PC platitudes of ‘equal opportunity’ and outright discrimination. His salvation depends not on ‘white’ respectability, but rather on resorting to the modus operandi of so-much gangster rap; slinging molly, making paper. Famuyiwa’s point is nuanced and subversive; how we perceive black America and how we respond to it are two sides of the same coin. For those dreaming of getting out of the hood, they must integrate the cultural realities of a racialist America and conform to its stereotypes.

But if all that sounds a bit heavy, relax. Dope is as fun as anything Hollywood’s putting out right now, and twice as loud. Bring the noise!