"Misguided though it is, Emma’s counsel is well intentioned. "

"Among the film’s side pleasures – akin to the lovely curlicues of the production design, in a way – are its supporting cast. "

There’s a scene near the end of Autumn de Wilde’s Emma where the title character realises – not for the first time – that she’s gotten something wrong. She’s a self-deputised matchmaker, and she can’t help but spend her idle time identifying single people who might make a perfect fit with one another. Her instincts, though, are ultimately rather bad, giving a rather large comedic flaw to a character who seems level-headed and a bit superior in most respects. On this particular occasion, not only do her eyes express the dawning horror of her miscalculation, but a single stream of blood trickles out of one nostril. She’s done so much thinking and over-thinking, she’s given herself a nosebleed.

It’s one of the lovely details that give this latest adaptation of Emma, the first prominent one since there were twin adaptations in 1995-1996, its own sense of individuality. Alicia Silverstone played the main character (there called Cher) in Amy Heckerling’s Clueless, and it was Gwyneth Paltrow in the title role in Douglas McGrath’s Emma. Now the part falls to Anya Taylor-Joy of The Witch and other films, prissy in her own distinct ways that charmingly unravel over the course of the narrative. She’s a good match for the exceedingly beautiful, almost fussily beautiful, production design of de Wilde’s film. You can tell the director cut her teeth as a photographer, as this looks like an opulent magazine shoot, but in the best possible sense. 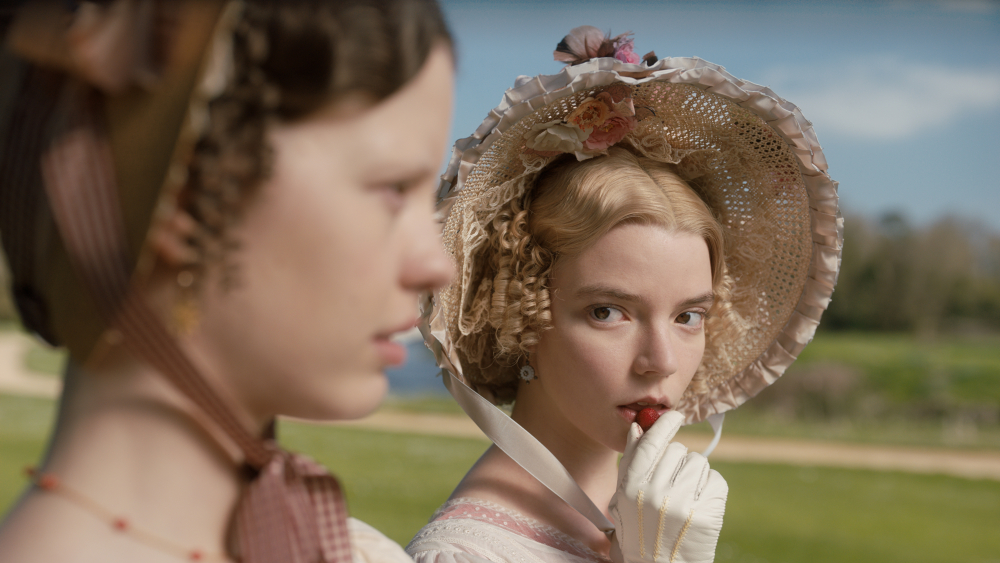 Emma Woodhouse is the meddling but well liked daughter of a rich father (Bill Nighy) in the small fictional English village of Highbury, circa 1815. (That was when the novel was first published, anyway). She’s beautiful and certainly of marriageable age, but she’s more fascinated by the idea of making perfect matches for other people in her village, often failing to recognise that they may be in love with someone else, possibly even herself.

Emma may not be vain in that sense, but she is in others. She fancies herself an exceptional judge of character and interpreter of social niceties, and because she thinks so highly of her own abilities, she doesn’t think twice about imposing her opinions on others. She does not, in so many words, tell her sweet but daft friend, Harriet Smith (Mia Goth), that she should reject the affections of a sweet but daft farmer – a farmer who is, to anyone who has eyes, Harriet’s perfect match. But Emma does heavily imply it, and that’s enough for Harriet to defer to her seemingly wise but ultimately misguided counsel.

Misguided though it is, Emma’s counsel is well intentioned. She genuinely believes that a local vicar (Josh O’Connor) has eyes for Harriet, and that his greater social station gives Harriet better prospects overall. Of course, Mr. Elton is actually shallow, vain and vulgar, and would like nothing more than to marry Emma. Over the course of the narrative, a web of interrelationships develops between Emma, Harriet and the other townsfolk of approximately their age, who are alternately suitors for each other. These include Emma’s brother-in-law, George Knightley (Johnny Flynn), who is suspicious and critical of Emma; Frank Churchill (Callum Turner), a handsome rake who usually lives in London but returns to Highbury to visit his family; and Emma’s perceived rival, Jane Fairfax (Amber Anderson). There are also plenty of representatives of the older set to add a dose of comedy, and occasionally a touch of something poignant.

The first place to start in de Wilde’s film is its extraordinary look. If Emma’s taste is good, de Wilde’s is even better. This entire movie looks like a birthday cake someone might make for Sofia Coppola. It’s got frills and truffles and a tastefully muted colour palette of pinks and light blues and soft yellows. The sets have to be comparatively reserved so as not to clash with the costumes that pop off the screen, designed to draw your eye to the person wearing them, most often Emma herself. De Wilde is clearly the veteran of numerous fashion shoots, and she’s engaged professionals who can realise her vision, outfitting the various sets (a haberdashery, Emma’s home, etc.) with furniture and other props that simultaneously seem to be both true to the era, and an expressionistic interpretation thereof influenced by modern design concepts. It’s such a luxurious setting to be in, it tends to quell any complaints about the likelihood of its inauthenticity. 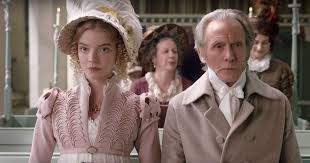 The extreme stylisation of the production design has a distancing effect at first. As we’re meeting the characters, particularly Emma, their defining traits feel too particular by half and more than a little forced. Quirks make us shake our heads for the wrong reasons, rather than the right ones. Encouraging the sense that the film is primarily a visual contraption, the score is working overtime to make things seem jaunty and mischievous, without the characterisation following suit.

Fortunately, this concern drops away as we spend more time with each character, a fairly generous amount given how many they are, and start to know them better. As archetypes they may be familiar to us, both from previous versions of Emma and from our general understanding of the literature of this period. Some, like O’Connor’s Mr. Elton, never exceed the broadness of an archetype. But most of the performers start to really contribute individually as things move along, perhaps none more than the two leads, Taylor-Joy and her (eventual) love interest, played by Johnny Flynn. Those are the Alicia Silverstone and Paul Rudd roles, for Clueless fans.

He’s charming in an unassuming way, as the role calls for. But it becomes all the more clear that Taylor-Joy was smartly chosen as the anchor of this film. She entranced us in The Witch due to that intense and unwavering look in her eye, but she’s got dimensions in her acting repertoire, and calls on them believably here. By the time that nosebleed arrives, it serves as a symbol of something the actress has made us believe through her performance – that Emma has travelled a character arc from prepossessed certitude, to an acknowledgement that life and love are far more complicated than what she assumed she knew. 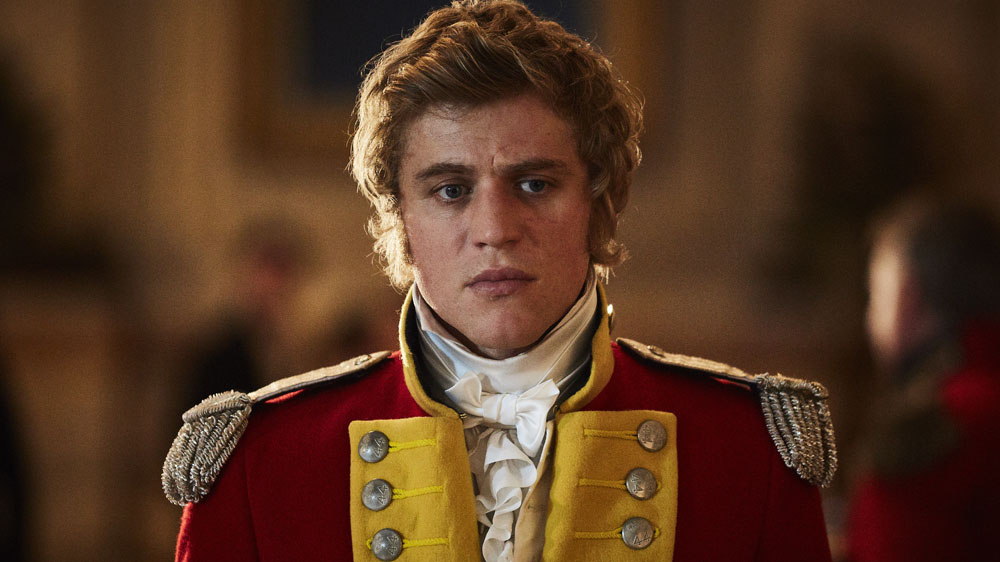 Among the film’s side pleasures – akin to the lovely curlicues of the production design, in a way – are its supporting cast. Two of the older actors in particular make an impression. Nighy is as reliable as ever in the small but occasionally crucial role of Emma’s father, submitting the type of stuffy physical comedy that has ingratiated him to an adoring audience lo these past 20 years. But there are a couple occasions when it’s conspicuous the way his older generation is being left out of these conversations, and potentially left behind. It’s similarly the case for character actress Miranda Hart, who plays one of those roles that at first seems too broad for its own good. Her Miss Bates is the kind of unmarried “old maid” who talks too much and perhaps plays the fool a bit, in order to draw additional attention to herself. When Emma cuts her with a thoughtless comment, though, we’re reminded how these are real people and emotions she’s blithely toying with.

Emma may not be the kind of adaptation that argues for its own existence by reimagining the material or making a strong new choice in how to present it. It’s no Little Women. But it may next year earn some of the same Oscar nominations as that film, perhaps not for its acting, but for a production design that transports you to a time in the past when everything seemed more innocent. A director with a keen eye has given us a visual treat with good comic stylings and a bit of dramatic heft. You can’t ask for much better a match than that.