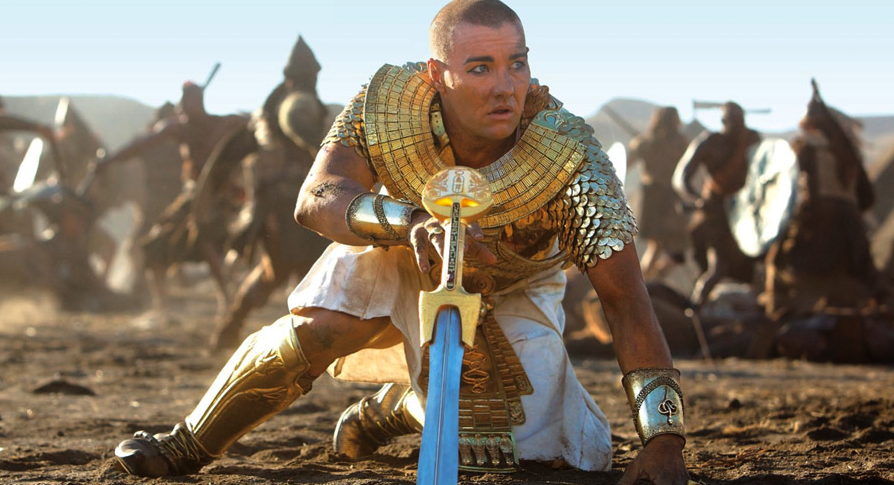 Exodus: Gods and Kings is almost unfathomably crummy. And yet, consider director Ridley Scott’s last decade, an epoch that produced Prometheus, The Counsellor, Robin Hood, Body of Lies, Kingdom of Heaven and A Good Year and it’s difficult to argue that the warning signs were not there. Exodus: Gods and Kings is the latest in a long line of Scott films void of creative or narrative drive, and further reason not to encourage the filmmaker’s rapid production rate. There’s such an ugliness to the way in which the story of Moses and his struggle to liberate the Hebrew slaves is presented that it would almost have passed for satire, had the effect been intended. When Moses confronts Ramses in an effort to convince the Pharaoh to free the Israelites (a moment of some significance, known surely to even those not biblically inclined), Ramses’ response is the utterly astonishing “From an economic standpoint it’s problematic to say the least.”

Moses (Christian Bale) and Ramses (Joel Edgerton) are raised as brothers by the Pharaoh Seti (John Turturro), although only Ramses is the Pharaoh’s true biological son. When Ramses becomes ruler of Egypt on his father’s death, rumours of Moses’ Hebrew lineage plague him, as well as an old prophecy foretelling his downfall at the hand of his brother. Banishing Moses, his closest friend and advisor, from the Egyptian empire, Ramses turns to ruling the Hebrew slaves under his command with an iron fist. Far away, Moses manages to wed an impossibly attractive woman, despite behaving and appearing quite erratically, and is somehow chosen by God, no less, to return to Egypt to free the slaves and teach his brother the consequences of blasphemy.

Christian Bale, a man capable of incredible performances, is powerfully miscast as Moses. My brother, who attended the screening with me, commented that Bale’s performance was so eccentric that it perhaps hinted of mental health problems. Bale’s sanity aside, the actor certainly stumbles through the performance like a raving lunatic, shouting – sometimes incoherently – at everything and everyone, presenting the sort of man you might find searching for loose change in a dirty gutter, rather than a consolidator of a nation. The fault lies not entirely with Bale, he’s just not the right actor to portray such a man as Moses. In Scott’s far superior Gladiator, it wasn’t a stretch to understand Maximus’ magnetic appeal, thanks to a charismatic central performance from Russell Crowe. In Exodus, it’s totally inexplicable why the Israelites rally behind Moses, who comes across as a rambling homeless man. 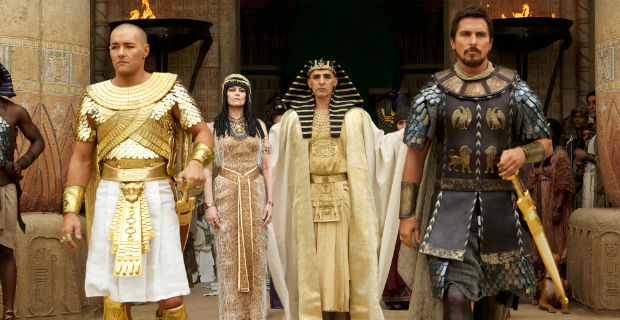 By comparison, Joel Edgerton makes a valiant attempt to uncover some hidden depth amidst a chaotically written character. It’s never entirely clear exactly what drives the Ramses. Perhaps the filmmakers weren’t sure themselves and so instructed Edgerton to throw a little bit of every conceivable motivation into the mix. Sir Ben Kingsley savours another paycheck as Nun, a character of minimal dialogue and even lesser consequence. Sigourney Weaver pops up periodically, offering a few cryptically furtive glances, and has an equally insignificant impact on proceedings. Aaron Paul and Andrew Tarbet seem to be occupying second-in-command roles to Bale’s militaristic Moses (“that’s a direct order!”), although Scott decides to leave their purpose happily enigmatic. Paul, in a presumably fake beard, will be impossible for anyone who has watched an episode of Breaking Bad to take seriously. None of the characters in Exodus are characters, but rather moving bodies and heads who sometimes say things that we’re meant to care about. To say that we don’t would be a grievous understatement.

Scott has approached the tale of Moses with a sense of gritty realism in one hand and an enthusiasm for religious spectacle in the other. If it was an experiment on Scott’s part to test his ability to harmoniously combine two incompatible aesthetics then it is a failed one. This is the fourth large-budget historical epic that Scott has directed in fifteen years, and with each one the filmmaker’s creative fervour has significantly diminished. Aside from the Afro-Asiatic setting, there’s almost nothing to distinguish the plot and characters in this film from those of Kingdom of Heaven or Robin Hood. Exodus: Gods and Kings is one of the worst films of 2014.