Set in London in the early 1960s, Ginger & Rosa depicts the breakdown of a close friendship between the two main characters, named (surprise, surprise) Ginger and Rosa. Initially inseparable, the teenage girls find themselves growing increasingly resentful towards each other as their family affairs become inextricably entangled, while the Cuban missile crisis, the sexual revolution, and the looming threat of a nuclear holocaust rages relentlessly in the background.

The film is a puzzling little conundrum. I watched Ginger & Rosa through twice and I could not properly figure it out. I was, quite frankly, fidgeting restlessly for the first hour and fifteen or so minutes; it was only during the climax towards the close that I was finally drawn into the action. When the credits rolled, I was left feeling an odd mix of ambivalence and disappointment that hinged crucially on the late turnabout of the film. There were so many wonderful details and nuances throughout, so many beautiful scenes and quiet moments, and yet I was completely and utterly… bored. The truth is that I didn’t particularly enjoy the majority of the scenes – but in saying that, I also don’t think it was a bad film.

For one thing, the cast was superb. Critics have already lavished Elle Fanning’s performance with generous praise, and I will also shamelessly add my own adulation in regards to her portrayal of the fiery, broken Ginger. Age is just a number, or so they say, but that doesn’t make it any less impressive that Fanning was thirteen at the time of filming, playing sixteen-year-old Ginger. Alice Englert is similarly brilliant in the other main role as Ginger’s dark-haired, dark-eyed ‘frenemy’ Rosa: morally grey, emotionally distant, and strangely alluring with all her put-upon, falsely confident seduction tactics. The close bond between these two characters, which fractures irreparably as the story progresses, accurately portrays that universally sharp and bittersweet tang of girly teenage collusion, before the gritty realities and pressures of society and the adult world set in. 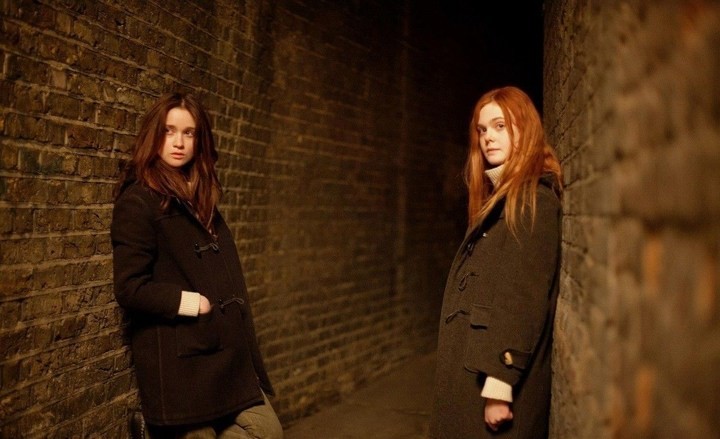 The cinematography was also skillfully handled, often utilizing the symmetry of the two girls to the best advantage, making for some exquisite close-ups and long shots. If you weren’t formerly aware of how, quite simply, pretty it is to see girls’ hair flying both into and away from their faces, trust me – after seeing this film, you’ll finally understand the hipster, Instagram-esque appeal. The use of lighting was also, no pun intended, a highlight in Ginger & Rosa, at times so bright and beautiful it illuminated every expressive emotion on the actors’ faces, other times etching out starkly dark silhouettes and facial profiles in sharp, stunning detail.

Perhaps what bothered me the most was the elusive, ungraspable quality of the sociopolitical turmoil that made its presence felt throughout the film. The fearful anticipation of the nuclear holocaust touches all of the characters’ lives, some more than others. Ginger and Rosa attend the meetings and walk in the marches of several radical activist groups, but it is Ginger who grows particularly passionate about the issue, eventually participating in a raucous protest that results in her overnight imprisonment. Yet, Ginger’s involvement in political activism just didn’t ring true for me; it seemed like a false front, that of a frightened girl desperately clinging onto some kind of cause as her personal demons emerge and her home life tragically falls to pieces around her. Her constant refrain, always a defiant cry, is how nobody really understands that the world could end soon; yet, that seems utterly irrelevant in the face of her own world crumbling, ceasing to exist in all of its former comforting familiarity.

The only other thing I can say to express my thoughts on Ginger & Rosa at this point is ‘hmmm’. And also, ‘shrug’. I liked the film, but I also didn’t like it – take from that what you will.