"Australian director Ben Young’s debut feature is a discomfiting and disquieting film about violent people in a violent world..."

"Curry plays the most opaque character, a man driven only by pathology with no relatable human emotions. "

Hounds of Love opens with an immediate sense of plunging into perversion. The camera moves slowly along the chain fence outside a school netball court, at a slightly faster speed than the super slo-mo of the teenage girls playing the sport. It takes in their torsos and the spot where their uniform meets their bare legs, as reality is forced into a near standstill. A low rumbling scars the soundtrack. 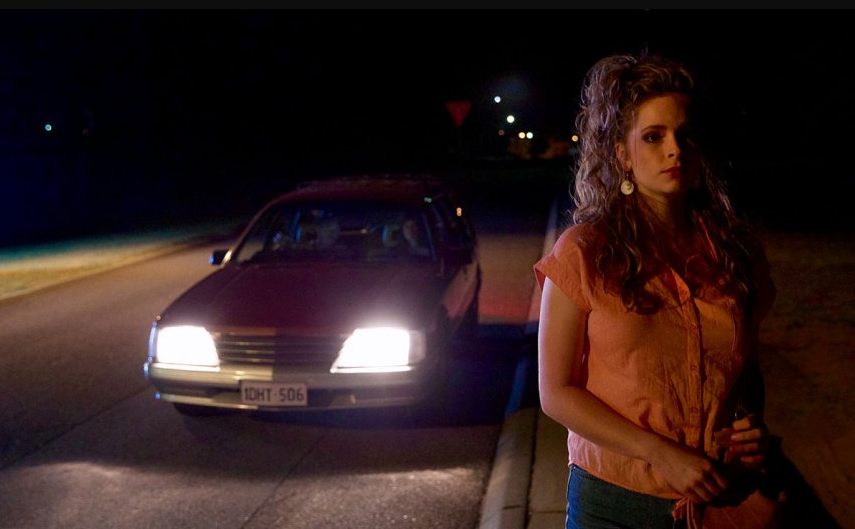 Style is another of Young’s assets, as this film is set in a hot Perth December in 1987, and the period has been mounted as though the era is still currently underway. Everything and everybody looks the part. The main part is played by Ashleigh Cummings as a girl named Vicki, who is predictably acting out as a result of both her age (around 16) and the fact that her parents are getting a divorce. She skips out of her mum’s house one night for a party she’s been forbidden from attending after a bit of academic fraud. That’s when the same car as above rolls up to her, driven by John (Stephen Curry) and Evie (Emma Booth), offering her a chance to buy a joint for her upcoming party. 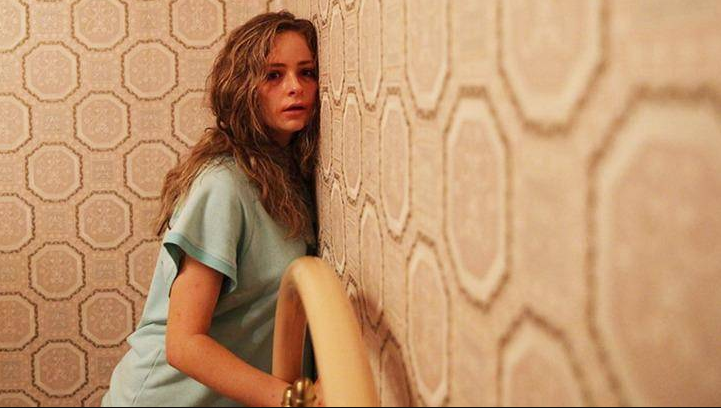 Unfortunately, they’ve “discovered” that they are “fresh out,” but that they “have some at their house,” which is “just around the corner.” We’ve heard that one before, but maybe back in 1987, Vicki had not. That quick pit stop at their house turns into a quick drink inside, but the drink is drugged, and, well, Vicki soon finds herself chained to the bedpost.

Young gets a lot of mileage out of the evidence of foul play – a grubby sex toy, a stained sheet, a smattering of blood on the ground – without showing us the actual foul play itself. He knows our mind’s eye will see the rest, so the eyes in our head do not need to. It keeps the tone grim without churning the stomach, and it’s a smart bit of restraint without sacrificing the grit of the narrative.

Then again, this film is considering something far beyond the atrocities perpetrated by John and Evie on their victims, as it’s not content to leave them as single-dimension masochists. Evie is, in fact, the film’s most complicated character. She’s more than along for the ride on a spree that’s been spear-headed by John, as she seems to get something out of it as well. However, more than anything she’s desperate for John’s attention, not to mention to get back her children, who are currently in the custody of her ex-partner. She’s a study in contrasting modes. As played by Booth, she is truly unpredictable from one moment to the next. As she possesses a mother’s empathy, her humanity is trying to creep through, but her penchant for rabid jealousy is also an overwhelming x factor that does not guarantee anyone’s safety.

Cummings is also doing smart stuff with the often thankless role of the kidnap victim. Her strategies for escaping and manipulating her captors represent some real ingenuity, but then again, rarely these days will we see a kidnapped woman who is not harnessing every ounce of her agency in an attempt to escape. Cummings does figure out ways to do this that seem fresh, and she’s delivering a memorable version of mascara-stained trauma. Curry plays the most opaque character, a man driven only by pathology with no relatable human emotions. That sounds like it could be construed as a criticism, but it’s not. He’s just giving us an unknowable monster, and doing it quite well. 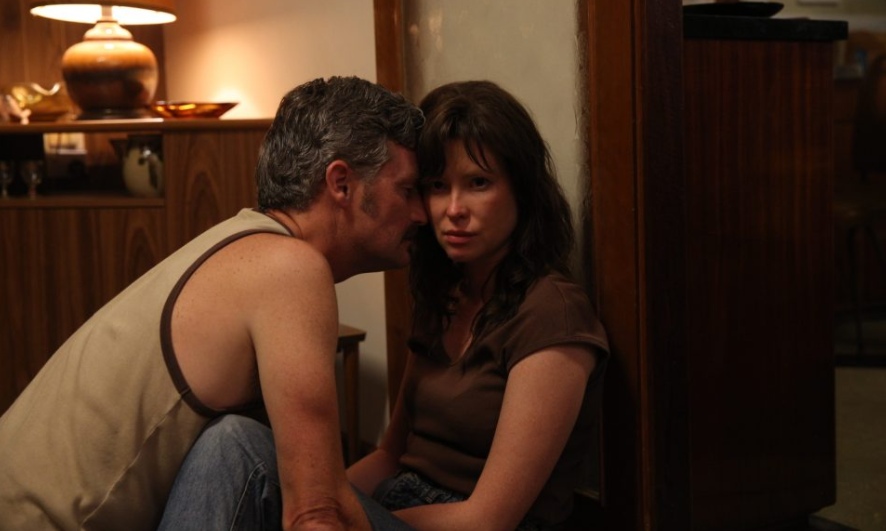 Hounds of Love is having it both ways. It’s quite conventional in many respects, touching on familiar beats and not straying far outside the bounds of movies involving women kidnapped by monsters. That it’s a couple doing the kidnapping rather than a lone lunatic is a small variation, and creates a different dynamic, but it’s probably not an important one in terms of the film’s overall narrative thrust. What makes the movie special is the distinct voice Young brings, which he gives us through the various permutations of the visual scheme he presents in the opening, his eerie slow-mo picking away at the scabs of suburbia like David Lynch is fond of doing. Young’s also got a knack for hitting all of our senses, as his use of era-appropriate songs – particularly, the Moody Blues’ “Nights in White Satin” and Joy Division’s “Atmosphere” – drench the film with additional, well, atmosphere.

Hounds of Love marks Young as an exciting new filmmaker for Australian viewers, especially those eager for homegrown talent, to rally around. His sensibilities may be uniquely suited to creeping inside the minds of damaged people, but that doesn’t mean his prospects for future subject matter are limited. Damaged people, after all, come in all shapes and sizes, as well as all genres, and learning more about them is one of the reasons we keep going to the movies.