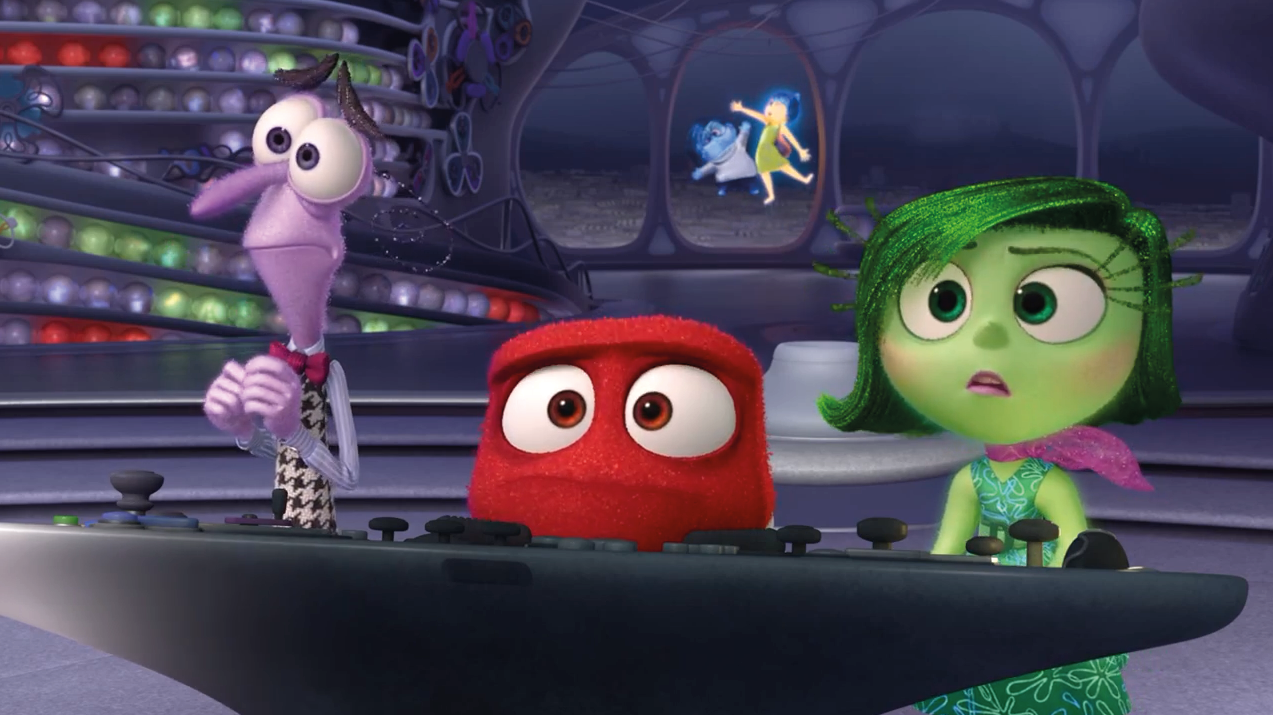 Pixar has been dogged in recent years by accusations that it’s paying more attention to its merchandising branch than its creative branch. Aside from Brave in 2012, Pixar’s two 2015 original features are surrounded by at least three sequels on either side – Toy Story 3 (2010), Cars 2 (2011) and Monsters University (2013) before them, and Finding Dory (2016), Toy Story 4 (2017), Incredibles 2 (TBD) and Cars 3 (TBD) after them. According to detractors, ongoing service to an increasing slate of popular franchises, which includes putting toys on the toy shelves, has threatened to extinguish the spark of original genius that drew cinema lovers to the studio in the first place.

Well, we won’t know about The Good Dinosaur until later this year, but Inside Out is nothing less than the antidote to any and all worries. It appears that Pixar – that magical Pixar everyone has discovered at some point in their lives – is still alive and well. Inside Out synthesizes the best parts of Toy Story, Monsters Inc., Up, and even Finding Nemo to produce a wondrous adventure that’s in the conversation for Pixar’s best overall.

And it’s original – except to the creators of the short-lived 1990s TV show Herman’s Head, that is. That’s a joke, but it’s true that Inside Out uses essentially the same concept as that three-season live-action show that starred, among others, the voice of Lisa Simpson: It’s the story of the anthropomorphized emotions in a human’s brain, and how they vie to control that human’s outer life. The human in this case is an 11-year-old girl named Riley (voice of Kaitlyn Dias). She’s a mostly happy young ice hockey player from Minnesota, so Joy (voice of Amy Poehler) – a yellow-skinned, blue-haired pixie with a constantly upbeat demeanour – is the emotion that has the benevolent run of the command centre in the girl’s head. Less influential are the schlumpy blue Sadness (voice of Phyllis Smith), the reed-thin purple bundle of neuroses Fear (voice of Bill Hader), the green style maven Disgust (voice of Mindy Kaling) and the literally hot-headed, red-coloured Anger (voice of Lewis Black, obviously). Riley’s five emotions work together in harmony to watch over her core memories and make sure that the facets of Riley’s personality – represented visually by themed islands – stay in balance. Unfortunately, a family move to San Francisco disrupts the status quo, throwing all the power out of whack inside Riley’s brain and threatening to change Riley’s personality forever. 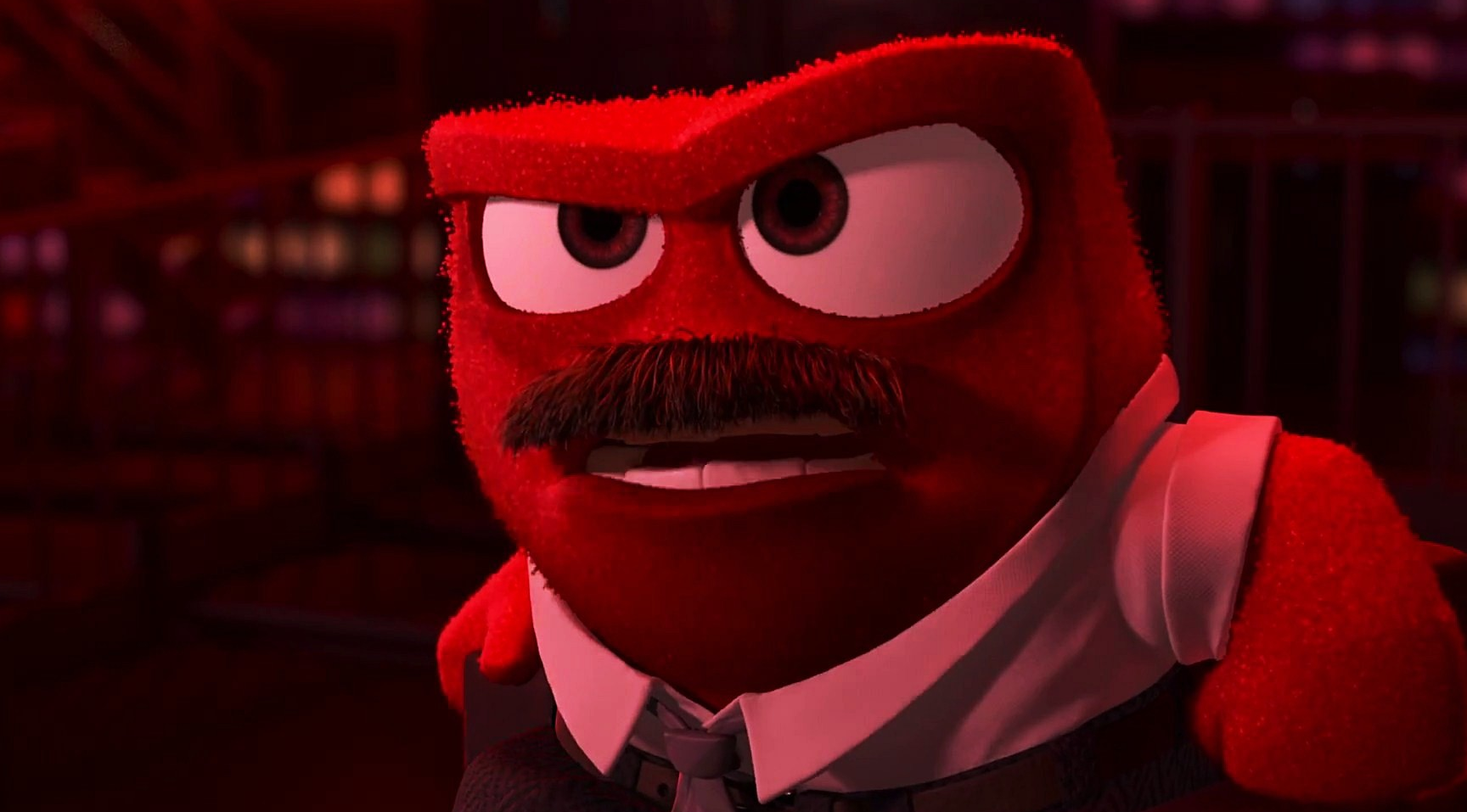 If Inside Out sounds way too conceptually advanced for kids, you aren’t appreciating just how deftly Pixar can make the complicated seem simple. Only a few side jokes intended for adults – such as the abstract thought region of Riley’s brain, where the characters become two-dimensional and turn into geometric shapes – would really tax a child’s noodle. (I don’t usually like to insert myself into my reviews, but I can tell you that I went with my four-year-old, and he didn’t ask a single question about what was going on.) Once a few basic rules have been established inside Riley’s brain – such as the fact that the memories look like coloured marbles, and they can travel to various storage repositories – the world becomes an endlessly imaginative playground for both a great hero’s journey and a profound examination of the process of growing up. The movie gets its sizeable doses of emotional resonance from the fact that merely by turning into a teenager, Riley is changing in ways that will mean the loss of some of her former innocence – a concept personified by Riley’s imaginary friend, Bing Bong (voice of Richard Kind), who is part elephant, part cat, and part dolphin, and who joins the other characters for parts of their journey.

Inside Out wouldn’t have nearly the impact it does, emotionally or otherwise, if it didn’t devote equal care to fleshing out Riley’s outer world. Diane Lane and Kyle McLachlan do great vocal work as Riley’s parents, joining the truly superlative performance of Dias as Riley. They are a normal family with the usual strengths and shortcomings, placed under strain by a move and by the father’s stressful job. The ways Riley’s outer and inner turmoil reflect each other are poignant, and this is probably Pixar’s most effective split narrative since the parallel storylines in Finding Nemo. Poehler’s Joy is the lead among the inner narrative, but Phyllis Smith – erstwhile of the American version of The Office – is its emotional centre as the unenviable emotion of sadness, the one the others are trying to prevent from taking control. She does the self-loathing built into the character perfectly, and eventually proves her value in the grand scheme of Riley’s emotional makeup.

Since Peter Docter also directed Up, whose early montage famously reduced audiences to tears, it’s no surprise that Inside Out is similarly devastating in spots. What’s more of a surprise is how funny it is in others, especially since Pixar has been short on laugh-out-loud moments in recent films. There are plenty of jokes built into the expansive universe of Riley’s brain, but it’s when the movie temporarily travels into some of the other characters’ brains that it really splits sides.

It’s refreshing to see what may be Pixar’s biggest gamble of all time pay off in one of its biggest successes. Let’s hope the critical accolades and commercial windfalls awaiting Inside Out will embolden Pixar not to just rest on its laurels for the next decade.