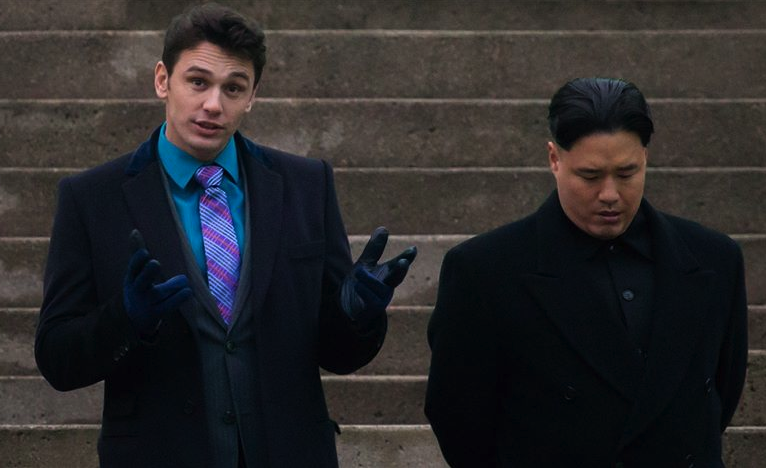 A lot of expectations were grafted onto The Interview when it became the most controversial movie of 2014. Some figured it was just the latest juvenile collaboration between writer-director-star Seth Rogen and star James Franco, and it was giving the North Koreans fits for nothing more than a bunch of gay jokes. Others worried it might actually contain the type of inflammatory material that would prompt a leader as insecure as Kim Jong-un to make an international demonstration of might. In truth, it’s kind of both – and far funnier and more trenchant than any of us would have ever expected.

Perhaps the single funniest thing about Rogen and Evan Goldberg’s second directorial effort (after last year’s This is the End) is that it’s not as far-fetched as it might seem. Ever since basketball player Dennis Rodman cast himself as an embarrassing U.S. ambassador to Kim’s regime, most of us have known that the new supreme leader has a fondness for western culture – perhaps the more lowbrow, the better. It’s not outside the realm of possibility, then, that the 31-year-old despot could cotton to someone like Franco’s Dave Skylark, a certified entertainment journalist bimbo who nonetheless has a knack for extracting outlandish revelations from the celebrities he interviews. (In the first of many of those gay jokes, accused homophobe Eminem accidentally confesses to being gay during a one-on-one with Skylark.) Kim is just egotistical enough to try to use a tightly controlled interview with Skylark to manipulate the western perception of him, and when producer Aaron Rapoport (Rogen) learns that Kim (Randall Park) is actually a fan of the show, he goes to great lengths to make the unlikely interview a reality – including meeting Kim’s propaganda minister at a seemingly random set of coordinates in rural China. As the world sits slack-jawed in disbelief that Skylark is the chump who scored this historic meeting, the CIA seizes an opportunity to eliminate one of its most irritating problems, approaching Rapoport and Skylark with a plan to fatally poison Kim and escape the Korean peninsula unsuspected.

Rogen’s and Franco’s reputation as some of the world’s leading purveyors of so-called “bro humour” turns out to be one of this movie’s biggest assets, as The Interview functions first and foremost as the quest for validation by misunderstood dudes. Both Skylark and Kim are thought of, in their respective circles, as lightweights who can’t handle the responsibilities assigned to them, and it’s a source of immediate bonding between their characters. One of The Interview’s many clever approaches is that this bond is presented as totally legitimate. As much as we learn from CIA operative Agent Lacey (Lizzy Caplan) that Kim is a master manipulator, it’s easy to also believe he could be an overgrown boy unwittingly thrust into a position of power that requires him to prove his cruelty to be taken seriously. At the very least, he’s a young guy who likes to blow off steam just like any young guy, and the methods of steam-blowing at his disposal make for some of the film’s funniest scenes. 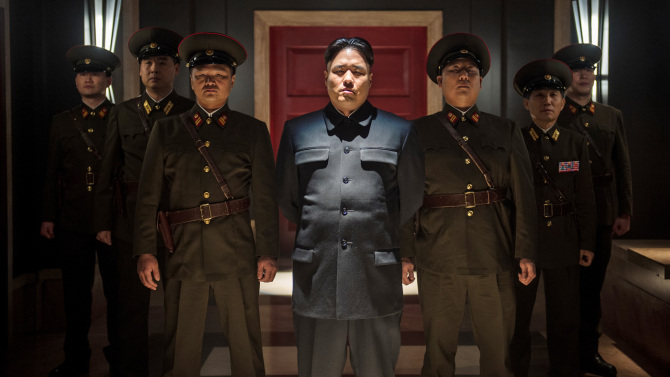 Make no mistake, though, that Rogen and Goldberg get serious with their subject, enough so that the film goes well beyond its moments of absurdity (many of which involve ingenious humiliations for Rogen’s character) and rises to the level of something politically important, a potential source of genuine pride for its actors of Korean descent. Actually effecting change within a state as willfully obtuse as North Korea might be too much to ask, but anyone who thinks Rogen et al made this only for a laugh will realise there’s genuine anger turning this project’s wheels. As funny, and often silly, as the dialogue is, there are enough lacerating lines (in Rogen’s “voice,” but also spoken by him) that you recognise a real political conscience behind all the dick jokes.

Since The Interview is above all a comedy, it’s useful to examine just why it’s such a successful one. And here we see Rogen and Goldberg really sharpening their instincts for economically using their raw materials. While their previous film had some big laughs, it also had scenes that ran overlong and spun off into tedium. Not so here. There’s an inevitable drug use montage in The Interview, but where that scene might have lasted 15 minutes in This is the End, it’s a mere 15 seconds here. One of the reasons The Interview feels so rich is that nothing gets flogged. The jokes instead settle in as long-term running gags, and they pay off in immensely satisfying ways. Adding to this sense of comedic maturity is a keen understanding of how to employ pop music to underscore the humour, particularly one Katy Perry song that culminates in the movie’s gutsiest moment – the moment when you recognise that perhaps the North Koreans weren’t overreacting to this movie after all.

The controversy over The Interview has ultimately proven fortunate, as hackers’ near-successful campaign to scuttle its release has made it a must-see for all champions of freedom of expression, as well as the fans of Rogen and Franco who were going to seek it out anyway. North Korea almost had the last laugh, but now it’s the rest of us having the first of many.